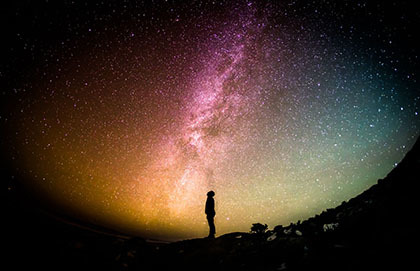 Astrophysics and The Society of Jesus August 23, 2019  |  By Hannah Marazzi with Adam Hincks

Convivium: In May, you joined 21 other new priests from Canada and the United States and Haiti to be ordained as a part of The Society of Jesus. Would you offer our readers a glimpse into the journey that led you to make that decision?

Fr. Adam Hincks: We were ordained in different places at different times over a month. And yes, ordained within The Society of Jesus, but of course for the Church. We're Catholic priests and we serve the whole Church and all people of goodwill. I entered The Society of Jesus in 2009. You don't become a Jesuit when you're ordained. You become a Jesuit when you enter the novitiate. It’s been 10 years since I entered the novitiate. I took my vows in 2011. And since then I've been in formation as a Jesuit, and my formation continues after my ordination through final vows.

C: What led you to discern this was a journey you'd like to embark on?

FAH: Well, it was the fruit ultimately of prayer. I had a profound sense that God was calling me to do something particular in my life. When I first started discerning this, I was doing a doctorate in physics at Princeton University and I really enjoyed the studies and the work I was doing there, but I felt as though this wasn't my particular calling for the rest of my life. When I sensed that God might be calling me to religious life, I had the sense that this was an opportunity to follow God's will in a deeper way.

And that was mysterious to me at the time because I hadn't really considered religious life deeply before I started feeling this call. But I went and talked to a Jesuit priest that I knew and just said, "Listen, I think I might have a vocation." I started seeing him for spiritual direction and eventually got in touch with the vocation promoter, went on some short retreats, went on "come and see" events to visit actual Jesuit communities. By the time I was in the last year of my PhD program, I knew that I wanted to apply to enter The Society. So for me, the discernment period before entering lasted a little more than three years.

C: Can you share about the community aspect of the Jesuits?

FAH: That's an important part of religious life, that we as Jesuits share with other religious congregations, like Franciscans, like Sisters of Saint Joseph, like any other religious congregation, community life is super important. So we typically, unless there are exceptional circumstances, will live in a community with at least a few other men. Normally we'll have at least one meal together. We celebrate Mass every day together, and so on. So it means that you're always with other people. You have people to support you. You have a superior who helps guide you through things. It’s a very fraternal way of life.

C: And how many did you live with? What did your particular community look like?

FAH: We have a number of different communities across Canada, I've lived in several. I also did a period of my formation abroad in Rome. The largest community was in Rome when I was studying theology. We were around 60 people in that community from all over the world. The smallest community was in Vancouver. We were four or five depending on when it was.

C: What is distinctive about the Jesuits?

FAH: If I were to describe what's distinctive about us, I might mention two things. First, we have a spirituality that shapes who we are and how we live, that's centred around the Spiritual Exercises of Saint Ignatius. So the Spiritual Exercises are a way of prayer, doing retreats, relating to God that really emphasizes having a personal relationship with God. It emphasizes relating to God with both the mind and the heart, with the imagination and with speculation. It involves finding God in all things.

And that leads to the second thing I would say is distinctive about us, that we don't have one particular area that we work in. We're not just focused in education. We're not just focused in parish work, for example. I think what is distinctive is we really desire to serve where the Church might not be able to otherwise reach. So we often seek to go to the frontiers, whether those frontiers are geographic or intellectual or social work, and we'd be present where other people aren't. So historically that's led us to do a lot of missionary work, especially here in Canada. That's one thing that we're known for.

C: Your parents served for seven years of your childhood in Lesotho with the Mennonite Central Committee. Can you tell us how your time spent in Lesotho under the auspices of a Mennonite organization shaped the way in which you see the world?

FAH: I was four when we arrived and 11 when we left. The question of how it shaped who I am today, and my journey... that's a very grown up question. When you're a kid, you know, where you live and what your family does is normal. I went to school. I played with my friends. I grew up in a loving family. I was aware obviously this wasn't what ordinary Canadian kids did, but you know, I didn't kind of stop and reflect about how it was shaping my character when I was there.

But I've come to realize that it's shaped me in very deep ways because they were formative years. First, it gave me a rich view of the world, having grown up in a different culture and then coming back to Canada and being able to see things from two cultural perspectives. And particularly realizing that there's a disparity between rich and poor in the world. Why do some people have a lot while others struggle to get by? I discovered since there aren't necessarily easy answers to that. But I accepted the fact through lived experience.

C: You have an extraordinary scientific background. You're trained as an astrophysicist, specializing in physical cosmology. Would you share a little more with us about this work?

FAH: I did a PhD in physics, and my area of study is physical cosmology. So that's the study of the universe as a whole. So what's the universe like as a whole on the larger scales of space and of time? How has it evolved? What's its history? How did it come to be, scientifically speaking? And it's a really exciting field because so much has been discovered recently. For instance, we've only known for roughly 90 years that the universe is expanding. Before that, no one knew that there had been a big bang and the universe was expanding. Within the last 20 or 30 years we've discovered that there's so much in the universe that we never knew existed before.

C: What would you say to those who think science and Christianity are opposed?

FAH: Contrary, I think, to the popular perception, the Church welcomes and encourages authentic scientific research. If you just look in my field, astronomy astrophysics, and restrict your attention to clergy within the church, we have made a lot of contributions. One little fun fact is that there are 35 craters on the moon named after Jesuit scientists.

The person who first came up with the idea of the big bang was a Catholic priest, Georges Lemaitre, a Belgian. The 19th century Jesuit, Angelo Secchi, is often called the father of astrophysics because he was the first person to, in a systematic way, study what stars are physically.

And today, the Pontifical Academy of Sciences, which is an advisory body composed of scientists who are experts in their field that the Church can use to consult when she needs information on what the most recent scientific knowledge is. There's the Vatican Observatory, which is an astronomical research institute that belongs to the Vatican and is run by The Society of Jesus. Then there are Catholic universities in the world, many have science faculties and are supporting scientific research. I think if you just look at history and what is going on, on the ground, I don't see how you can say that Christianity is opposed to science.

C: And you continue to do some scientific research and are an associate scholar at the Vatican Observatory. Would you share a little bit more with us about that work?

FAH: As a Jesuit, I spent two years as a full-time scientist at the University of British Columbia. Then during my studies, I have tried to spend at least a few hours every week remaining active with my research colleagues. When I was a graduate student I started working on the Atacama Cosmology Telescope. This is a telescope in Northern Chile for studying the very early universe. At UBC I also was involved in the Canadian hydrogen intensity mapping experiment, CHIME, which is a project to try to measure exactly what the rate of expansion of the universe has been.

Currently I've been involved in Simon's Observatory, which is a new observatory under development in Chile for observing the early universe. Here in Toronto, during my theology studies, I try to spend roughly a day a week on science. And as you mentioned, I'm also an associate scholar at the Vatican Observatory. I've been in contact with the scientists there for a few years now. And when I was living in Rome, I would go and visit every now and then. So as an associate scholar that's kind of an official way of saying that I'm a friend of the Vatican Observatory.