Stuck inside these four walls

Never seeing no one nice again

–Paul McCartney, “Band on the Run”

Then I better stay in my room

Better stay in my room

Better stay in my room

Residents of Ontario find themselves overseen by a government that was exceedingly quick to promise to make life extra inconvenient for those who don’t acquiesce and readily submit to receiving a vaccine for COVID-19. How did it come to this?

To be frank, COVID has kicked Canada in its collective groin. Health care is our nation’s most prized jewel—we brag about it constantly, but it’s our most sensitive and vulnerable spot, too. Getting hit hard there is incapacitating.

Thousands have died, hundreds of thousands have been counted as cases, millions have had their lives disrupted. COVID’s toll has been appalling. As someone who teaches political theory, I have worried since before it was declared a global pandemic not only about the lives we would lose to the virus, but also how we would choose to live in a world in which we’re stuck with it. 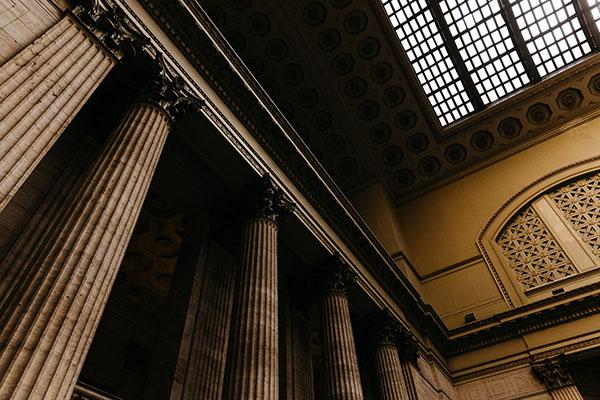 From the get-go we were told that there would be no hope until a vaccine arrived. Vaccines became the one thing needful. We have endured lockdowns and shutdowns and antisocial practices such as physical distancing for nearly a year, longing for salvation from the hell that was 2020. Finally, in November—good news! Almost immediately following the American election, word spread that there was not one but two vaccines, ready for delivery. They were proclaimed safe and effective, and soon we would be in the possession of more. The announcements were a source of comfort and joy. It was like a miracle, pronounced the outgoing President. Through the coming holiday season, we could await and anticipate our liberation. Relief was on the way.

Appended to these glad tidings, however, was an admonition, a threat. Here in Ontario, where I live, the government wasted no time assuring residents that if there be among them anyone who did not accept the promised remedy, their condition would most assuredly worsen still. If you thought 2020 was unpleasant, just wait and see what the future holds for the hesitant and recalcitrant.

Apparently, our provincial slogan is undergoing some minor modification; soon it will be: “Yours to Discover, Unless…” Exactly what sanctions will be applied have not yet been formally decreed—which rights abridged, what penalties inflicted, what restrictions imposed, what access denied, what surveillance enforced—but you can be certain that they are hard at work devising them. Perhaps details will be forthcoming once we emerge from our latest state of limbo—their most recently mandated suspension of all activities except those they deem essential—possibly in another one of those press conferences where they line up in precise formation with austere faces, robotically approaching the microphone one by one, like children in a spelling bee. Compliance: C-O-M-P-L-I-A-N-C-E. Compliance.

It is important to note that they have so far declared there will be no compulsion. Their telling people that they remain free to choose after promising them potential personal ruin if they choose poorly, however, reminds me of a schoolyard bully holding down the scrawny kid, beating him with his own limbs, saying, “Stop hitting yourself. Stop hitting yourself.”

After cautioning the unenthusiastic, they left people who might be hesitant time to stew over exactly what their warnings might imply. Will you be effectively confined to your home? Allowed outside only if tracked in a fashion that might ordinarily befit only expensive pets? Must you wear face shields indefinitely to identify you as unsafe? What public services will be withheld from you? What penalties will you be susceptible to? How frequently will you be subjected to interrogation by officious public servants representing newfangled task forces? Will others in your community be forced into isolation if they happen to come into your proximity, as if you were some kind of contemporary leper? Will there be rewards for tattlers who report your infractions? Will amber alerts blare on everyone’s devices should you go AWOL?

Every string of rhetorical questions tends toward hyperbole, but during another prolonged lockdown our imaginations can fly to extremes wondering what else may be done to any one of us for the sake of the common good.

Naturally, the government doesn’t want to inflict any of these burdens, deprivations, or indignities upon you. If it must make a pariah of you, it is only because you have done that to yourself. Over the past year, governments have been gaining experience at devising and applying policies with remarkable bluntness. Even though important questions were raised in 2020 about the exercise of coercive force by agents of the State, it looks like we should get ready for more of that kind of thing. We’re already seeing the ramping up of boneheaded muscle during the current lockdown in the nation’s capital, where bylaw enforcers might write up kids for posing a menace while tobogganing. You might be tempted to curse these uniformed functionaries should they hassle your family; but remember, Jesus befriended even tax collectors. The Christian thing to do would be to invite them over as guests to your home—except you’re definitely not allowed to do that these days, either.

I am blessed to have been spared any personal losses during COVID Times, so far, but my melancholic temperament tells me that won’t last. My son was placed in self-isolation, or “bedroom jail” as he called it, for two weeks before Christmas, because he spent a few minutes in a room with a schoolmate who apparently tested positive. A nurse at the public health unit told us it didn’t matter whether or not he was wearing a mask because of the virus’s transmissibility through the eyes. The nurses who spoke with us were nothing but pleasant, patient, empathetic, and solicitous. Luckily, neither he nor any of his other similarly quarantined schoolmates tested positive or developed symptoms.

We’re all very fortunate. As a teenaged boy, my kid was fine; two weeks with his screens, guitar, books, weights, with room service and without any chores, was like an early, extended vacation. That said, I cannot help but suspect that normally parents who confine their children to a single room for two weeks might expect a visit from Children’s Aid.

The bluntness of province-wide policies was exemplified in his case by the prohibition against his getting some fresh air by walking in the woods visible from our front window, on the edge of a rural small town, where he would encounter literally nobody else—even after he tested negative. My own inner teenager says: I guess the science deems that too risky.

I bring up his example to illustrate how, just over a year ago, most Canadians would have thought it ridiculous to imagine that our governments would treat members of the public in the variety of stifling ways that we now experience as understandable if not acceptable and treat as necessary if not deserved. I can only hope that whatever measures the government elects to enforce to further trouble those troubled by the vaccines, it realizes that what it is doing is not inherently good. This is a clear-cut case of politics being about choosing the lesser evil.

Governments should make every effort when enacting these policies to provide assurances that their implementation will be limited, non-arbitrary, and temporary.

Whatever costs and restrictions the government imposes it should do so only because it is convinced that not following through in this fashion would be much worse. In addition, governments should make every effort when enacting these policies to provide assurances that their implementation will be limited, non-arbitrary, and temporary. Unfortunately, governments seldom give up newly acquired powers and they rarely make mistakes they wouldn’t rather double down on; plus, people can get used to almost anything. The year 2020 already saw the normalization of much we were originally told would last for only a few weeks. Now there’s talk that things won’t really start approximating normalcy (or whatever simulacrum will substitute for it) until 2022 at the soonest, even though the vaccines are safe and effective. That’s a long time for anybody to be severely inconvenienced.

Personally, I am generally critical of modern society’s tendency to believe that with enough willpower and imagination, politicians and technologists can accomplish anything. Excessive faith in the ability of technology in combination with political power to achieve sufficient rational control such that we might expect to fix all of our problems and right every wrong is more a counsel of despair than a sign of hope. For the past five years or so, my own political instincts have been basically boiling down to one guiding principle that largely eschews ideological or partisan commitments: Let’s try to avoid whatever policies and practices nudge us, however slightly, toward authoritarianism and totalitarianism. For a while we’ve been witnessing things progress along those two distressing and intertwining trajectories around the world, across the political spectrum. Even if they’re pursued for public health reasons, the measures that governments like Progressive-Conservative-led Ontario are proposing resemble those trends, however slightly. Unfortunately, there’s a track record among some of the worst regimes in recent history to make appeals to public health considerations to rationalize their bad behaviour. I have to hope that the powers that be recognize all this and restrain themselves accordingly.

Niccolò Machiavelli… taught modern governments that the best way for them to avoid responsibility for their decisions is to blame necessity for their actions.

At the outset of modernity, political philosopher Thomas Hobbes told us exactly what kind of government we should expect—he would say “need”—if you’re willing to do anything to preserve yourselves: a totalizing, absolute government against which the public has no recourse. It is also Hobbes who most cleverly contrived the argument that whatever the government does to you, you have really only done to yourself. Niccolò Machiavelli, whose influence is found all over Hobbes’s writings, taught modern governments that the best way for them to avoid responsibility for their decisions is to blame necessity for their actions. Appeals to necessity can be used to justify anything undesirable or disgraceful. The rhetoric of necessity also works fairly well at winning obedience. Nothing in modern times is perceived as more necessary generally than whatever is dictated by science. And nowadays, nothing presents itself as more necessary for our preservation specifically than medicine. Knowing the Machiavellian pedigree of political appeals to necessity, however, we should exercise greater skepticism and scrutiny when governments make recourse to them to expand their power, not less. Science does not and cannot dictate policy; that’s why we need statesmanship and responsible government.

Going all the way back to the ancients, when Plato presented the idea of philosopher-kings—whose successful governance would depend in part on technological innovations in medicine—he already grasped that the rule of science is inherently despotic. It leaves no space for moral agency. Plato’s protégé, Aristotle, further understood that rigorous scientific thinking and technological know-how are both liable to be used for bad ends, if unwittingly, and that neither of them provides a substitute for practical intelligence in political affairs. None of this should be news to us.