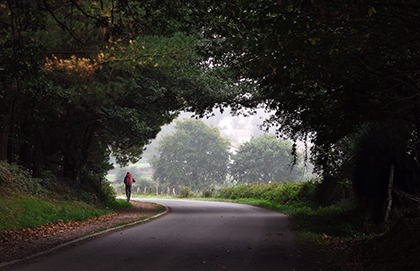 Walking the Way of the Camino Nova Scotia January 21, 2020  |  By Hannah Marazzi

The Camino de Santiago each year draws thousands from around the globe; young, old, lost, and found. While some complete portions of the route, others set aside weeks to travel this well-worn footpath.

Halifax’s Atlantic School of Theology has its own variation of the Camino, a program in Nova Scotia, offered through the school’s continuing education division. Convivium’s Hannah Marazzi sits down with recent pilgrim, Donna Preater, to discover the gifts that lay ahead for those who wish to pilgrimage closer to home.

Convivium: How did you hear about the Nova Scotia Camino?

Donna Preater: A friend of mine sent me a cutout about the walk from the Anglican Record for my birthday in April. I didn't look at it until about May, and then said, "What!?" I sent them an email, and they put me on the waiting list for two of the walks they offer. They called me in July to offer me a spot. Life was pretty full. In the end I went on the Annapolis Valley walk.

C: What is distinctive about the Annapolis Valley Walk?

DP: The Annapolis Valley Walk takes you along through the orchards that are there. Alongside the orchards is a trail called the Harvest Moon. It's an old rail bed. It's pretty flat, which is nice when you're walking. It’s 110 km from the beginning at Grand-Pré, where the Acadians were and it is beautiful. As I completed my walk, the colours were just beginning to come out on the trees. We were probably two weeks early to be there for the trees to have changed colour, but it was lovely. I understand that this Nova Scotia Camino has run for three to four years out of the Anglican School of Theology in Halifax.

C: How did you prepare to go?

DP: Initially, I was a little worried when I went. Could I do it? But of course, my kids said, "Yeah, you can do it, Mom." And it was important to tell myself, and even to show myself that I could do it too. My husband and I had been training here before I went, by going for good, long, 25 to 30-kilometre walks here between communities in Western Canada.

C: Can you share a little about your walking companions?

It was my goal to listen to each person and their story. I wanted to learn who they were and what their world was like. That was an important aspect of the whole picture. Some of my companions helped with meals, or helped me with my feet when I was having an issue with my left foot. There is personal meditation, but there's also journeying with others. There is such a large part of experience, in which you are with others and serving one another.

C: How is each day shaped? Was there some sort of structure?

DP: For the entirety of our trip, our accommodations were in cathedrals along the way. Some Anglican, some Baptist, others were United Churches. Each had beautiful stained glass windows, and we got there in the daytime, so you could just see the beauty of those windows. Each day, we would wake up, have breakfast, pack our lunches, and begin to walk together.

Now, we didn't all walk at the same pace; some were stopping to take photos, have a lunch or just sit on a nice bench. I am more a get-out-there-and-go person, though I did take a few detours. Most days, we walked 20 km, though there was one day that we did 33.

We would usually get into the community that we would be staying with, in the afternoon. The supper meal was prepared for us in the kitchen of the church that we were in. And then, after supper, we would sit around and talk. We would have an evening devotion. We would also sing songs together because a lady in our group wanted us to sing songs. She had lost her faith, but she missed the singing and so she requested that we sing in the morning and the evening. And then we would go to bed, putting our sleeping bags on the air mattresses they had provided.

C: What most surprised you about this experience?

DP: You know, it surprised me that a lady who had lost her faith would want to come, but she was one of my walking companions. And yet, I also know that pilgrimages aren't necessarily spiritual. Some people do it for a loved one or a personal journey. I went with the idea of listening. But I also went with a prayer list; I would pray for particular people and situations.

DP: The thing about walking and journeying is that you go one step at a time. And people say, "Oh, how could you do it?" Because they hear that I walked the 110 km, but it really is one step at a time. It might be daunting to think about walking 20 km in one day, but really, it's just walking. You see what's ahead of you and then it comes closer and closer and you accomplish it. And you know, there is a significance there. I really want to do the 800 km Way of Saint Francis in Northern Spain. So this was a way to see if I could do it. And you know what? I think I can.

C: What would you say to someone who is considering undertaking a similar journey?

DP: I heartily recommend that people choose to take time out of their busy lives to be, well, mindful. This is an experience devoted, not just to meditating, but also to enjoying life lived with others. I have a few memories that I know I will specifically carry with me. One that will always remain profound to me is of the day we arrived at a little Anglican church in the Annapolis Valley that had found the remains of 14 people who were not in the cemetery. Perhaps they weren’t baptized or had been left outside because they were African American, or perhaps they had been lost at sea. Regardless, this church wanted to consecrate or include these people. And so, they had a special service, had a special plot made and they put a little garden right in front of the cemetery to honour them. That was very, very touching.

And I will also carry with me the memory of the next day. We arrived at a church, which had no showers in it. Members of that church came and opened up their houses for us to shower in. As we got into the car, one of the ministers I was with said, "I love the church!" I woke up in the morning and starting scribbling in my journal and came to this beautiful realization: I love the church too! She spoke the words of my heart that I didn't even know were there. I shared it the next day at our time of evening reflection and one of the women who had given up her faith approached me and said, "Donna, I can see you love the church."

It was this beautiful moment: to see the church at work in those who are journeying. My eyes are open to the great hurt experienced by some from the church. We've done some horrible things, we’ve made great blunders, and yet, the church is also those who continue to love and serve. I feel my eyes have been opened to see this different and particular way of serving and it is just so beautiful to me.