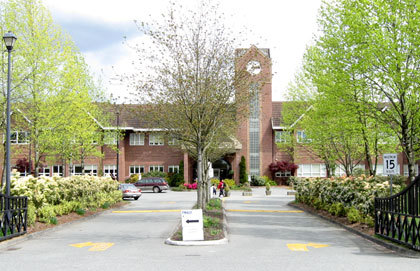 Not long before the end of 2018, British Columbia industrialist James Allen Pattison turned 90.

There are faith-based facets to his story that point to his ability to get people and groups working together for the greater good.

Jim Pattison himself described the beginning of that story in the late 1980s, at Pacific Academy, whose brick clock tower is clearly visible from Highway 1 in Surrey. The occasion was the dedication of school’s Chandos Pattison Auditorium.

He told how Chandos Pattison, his father, had owned – and lost – a farm implement and automotive dealership in a small Saskatchewan town, Luseland. To recover from those hard times, the Pattison family, including young Jimmy had moved into Saskatoon, into a crowded one-bedroom downtown apartment.

One wintry evening, pleading cabin fever, Chandos slipped into the city streets. He came upon a little church, heard the singing and went inside.

He found Christ there. His life was changed, and so was that of his family. They discovered a new sense of purpose and moved to Vancouver. In due course, Chandos became the western Canadian manager for Packard, a luxury car manufacturer.

Young Jimmy (many of his friends still call him that), grew up and went into commerce studies at University of British Columbia. He didn’t finish his degree, ironically because he became so successful at selling cars to his fellow students.

While Pattison seemed obviously to be a free enterprise type, his story hints often at his ability to encourage collaboration, rather than class warfare, by working to bring out the best in others.

In his early years, Pattison was criticized because, in his auto dealerships, the lowest performing salesperson would be let go if he or she could not meet the targets. Pattison maintained that often it was for the best, because someone who was not well-suited for commission sales would likely do much better at something else, if given the opportunity.

The penchant for working across ideological lines particularly emerged in the run-up to Expo 86 when B.C. Premier Bill Bennett solicited Pattison’s help, particularly in sorting out increasingly complex labour relations on the Expo construction sites. As the volunteer chairman of the Expo ’86 board, Pattison was successful in getting both union and non-union contractors – and their workers -- to live and let live. There were oft-repeated accounts of non-union and union workers sitting on the fences between their construction zones, sharing lunches and congenial conversation.

The next, and most striking, occurrence in this narrative occurred a decade later. At that time, the leftist NDP premier of British Columbia, Glen Clark, became ensnared in a scandal over gambling and influence peddling that led to his resignation..

A few weeks before his case went to court, Pattison approached Clark with an offer to have the younger man run some of his companies. At court, Clark was cleared of the charges.

Pattison saw strength in bringing Clark into his companies. For one thing, the former labour lawyer and NDP politician understood the union mindset and could give good leadership in labour-management relations.

But there was something else. Jimmy Pattison, son of Chandos, knew what it meant to reach out in faith and take some risks. And Glen Clark needed someone like that, at that juncture, when many even in his own party had turned against him.

Today, Clark is president and COO of the Jim Pattison Group, which is the umbrella for all the Pattison operations – food, auto, entertainment, philanthropy etc.

Global Television occasionally runs leadership interviews with prominent Canadians. One such interview with Clark queried him on his experience as a former union lawyer now running operations where the unions are a significant component of the success of the companies. His response: The need to “build trust.” And the implication: It is much less complicated to build trust in a collaborative enterprise, such as the Pattison group, than in an adversarial setting, such as a provincial legislature or federal parliament.

Two decades after Pattison and Clark began working together, a little known spinoff of the story developed in the Fraser Valley. Last fall, about the time Pattison turned 90, Chris Braun ran unsuccessfully for the school board in Chilliwack, 100 kilometres east of Vancouver.

In Chilliwack, the teachers’ union and some parent groups were at serious loggerheads over the implementation of the SOGI-3 (Sex Orientation Gender Identity) anti-bullying resource materials mandated by the provincial government. Opposing sides accused the other of child sexual abuse, and the vitriol was, in Braun’s view, making things interminably worse.

Braun’s run for office grew out of his 27 years as a union member and leader in the Pattison Group’s Save-On Foods organization. He was clearly impressed with the Save-On setup, where union and management found every possible way to work together. Despite not winning a seat, Braun continues to try bringing the sides to understand each other better.

The Pattison story fleshes out when one takes into account the philanthropic side of the Jim Pattison Group’s activities. While much of that largesse has been directed toward health care and educational projects, others have related to a faith that was nurtured in Chandos Pattison’s finding Christ, and the impact that had on young Jimmy.

The faith-based side of Pattison’s leadership during his early years related to his trumpet-playing at a large Vancouver Pentecostal Church. While he was not flamboyant about his faith, close observers could see it playing out in the development of a “fair play” business ethic and a sense of care for his growing number of employees.

As Pattison’s business empire grew, philanthropic contributions to significant faith-based projects increased. They included the 1984 Billy Graham British Columbia Mission. The budget for the eight day event, which drew 240,000 aggregate to BC Place, was just under $2 million. Pattison’s contribution was believed to have been $50,000. More significantly, the record shows it introduced some 11,000 people to the idea of committing their lives to Christ – as Chandos Pattison had done.

Arguably more significant, in the educational field, was the $30 million or so that Pattison has put into the above-mentioned Pacific Academy (PA). Today, PA, with 1,450 students, has a program rooted in Christian values with a distinctive blending of evangelical, social justice and international development perspectives.

As an outgrowth of his support of PA, Pattison recently contributed to a major Cardus-initiated study by education program director Beth Green on the role that private and/or independent schools play in a province’s education system. So, in effect, the Pattison-Clark combo can be seen as moving well-beyond one cluster of corporate entities, to help shape collaborative policies, strategies and best practices in governance, legal, educational and even global spheres.