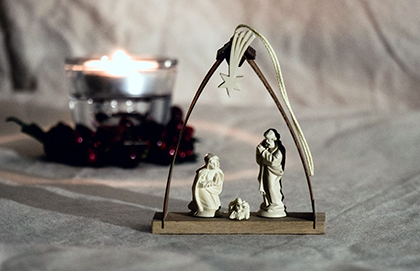 I didn’t expect to encounter the humble peace of the Nativity in the grey of late February.

As our campus back home in Kingston, Ont. was hit with late-winter freezing rain and the cutting winds off the lake, I found myself standing in the courtyard outside the Church of the Nativity in Bethlehem among a group of students from our chaplaincy with Convivium Editor-in-Chief Fr. Raymond de Souza and a Bethlehem native as our guides.

To enter the church, even the smallest among us had to bow through a tiny door in the towering limestone walls. The church was crowded and chaotic, a stark contrast to the calm courtyard. Even after several days of visiting religious sites along with bustling crowds of pilgrims, I was overwhelmed.

As a general rule, I avoid large crowds. When I find myself in a crowded place, I spend most of my time deliberately re-centering myself in an attempt to avoid panic. And this church was not just crowded, but under construction, adding to the chaos. The floor in the centre of the church was bare, cordoned off by ropes and tarps, red lanterns and gold bulbs strung from the ceiling by chains, almost undiscernible from the ladders and scaffolding. I looked to the altar for solace, but it was barely visible to begin with, and so obscured by the chaos that it appeared as one tarnished-gold and gilded tangle.

I stuck close to my tall friends and focused on our guide telling us stories of this church’s history through the cacophony of voices from all around the world singing and shouting over one another. Slowly, we inched ourselves around the construction barriers, towards the sanctuary. He explained how we came to recognize this location as the place of Christ’s birth: that the story of a birth in a cave would have spread by word of mouth, and that after Christ’s death and resurrection, early Christians would make pilgrimages here.

The Romans, seeking to quell this new religion, hijacked this place for a shrine to the god of agriculture, Saturn, by planting trees all around it. Christians would still clandestinely pilgrimage to the place of Christ’s birth under the guise of worshipping the Roman god (surrounded by – he inferred – the first Christmas trees?).

The closer we moved toward the church’s sanctuary, the closer and tighter the crowd became. At certain points, I felt as though I couldn’t breathe. I kept reminding myself that the exit to the church wasn’t far behind, but that we would be at the front of the horde soon. When we entered the sanctuary, the men directing the line ordered us to be quiet. Still, the crowd was on top of one another, and the commotion of the open church was close behind. The group behind us pressed so close that they were literally leaning on our backs. We pressed closer to narrowing steps funneling to another small, dark doorway.

Finally, our group descended into the silent alcove. Candles and lanterns surrounded a star-shaped hole in the marble floor – the place of Christ’s birth. Somewhat dazed and disoriented after hours of waiting, we took our turns kneeling to venerate this integral location in our salvation history. Our guide, privy to our bewilderment, instructed us softly – “sing.”

My dear friend, with her gift for music, gently started singing Silent Night. We all joined quietly, and a peace filled the cave-like space. Or, rather, the peace had always been present, but in holding onto my anxiety about our journey here, I had not been able to experience it. With the singing of this song, the gaze of my heart was turned away from the chaos of the world and to the Holy Family – Joseph gazing with love on his wife, who held in her arms the fragile and beloved Christ Child.

In our waiting, I had not realized that they had been walking with us all along. Through the crowds gathering for the census at Bethlehem, through the pilgrims gathering to pay homage to the Son of God, they were there. Their entire lives had been uprooted and turned around to make room for the salvation of all of humanity, and all we had to offer them was this simple lullaby that my own father would sing to me before bed when I was a child. It was nothing, but I felt Mary smile at our gift, the Child sleeping against her chest.

As we left the Church of the Nativity, back through the crowd and the curtained, tiny door, I carried with me a renewed peace. I felt shrouded from the chaos, holding in my heart this close encounter with Christ.

During Advent, this treasured memory resurfaced on my heart. As a student in teacher’s college, my journey towards Christmas this year was full of final assignments and deadlines. As far as what is going to happen after Christmas and into next year, very little is certain. I am emotionally and mentally back in that crowd making its way towards the alcove, side-by-side with the expectant Mary and Joseph making their own journey with hordes of travelers to Bethlehem. With little in the way of space, quiet, or certainty for the future, this couple took refuge where they could – in a cave, where the Prince of Peace was born. Royalty, sleeping in straw. Profound peace in the midst of utter chaos. Leave it to our God to embody complete simplicity, peace, and humility from the very start.

My prayer is that the Holy Family will let me walk with them and take comfort in their company on this chaotic road to uncertainty. I pray that, as we approach Christmas, I will have the humility to rest, and to lean into the shroud of Christ’s peace, giving Him what little I have and letting Him strengthen me for the continuing journey to Heaven.