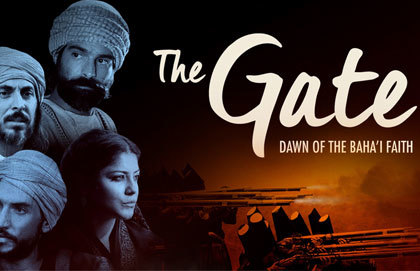 In a recent New Yorker essay, Adam Gopnik reflected on the challenges and perils of reading sacred scriptures as a modern reader. When reading these texts, he writes, “we too easily glide past difficulties, or propose aesthetic interpretations, in ways that lead us away from the obvious intentions. By searching around for the good bits, we read past the point, and past their point of view.” These challenges extend into other endeavours that try to present – and, therefore, interpret – the lives and teachings of Prophets and Messengers of God.

This has been a particular challenge for film. The most ambitious religious movies of this sort, including Mel Gibson’s The Passion of the Christ and Martin Scorcese’s The Last Temptation of Christ, have often been polarizing for their narrative and aesthetic choices.

The Gate: The Dawn of the Bahá’í Faith, directed by Bob Hercules, is the first cinematic attempt to portray the life, history, and teachings of The Báb. It avoids many of the problems of the genre by approaching its subject in a more didactic way, as a kind of historical documentary. In the opening sequence, it also informs the viewer that out of respect for their divine station it will not depict any of the Prophets of God. The film is self-conscious about the fact that it is narrating the story of a religion that remains little known among Western audiences.

The Báb (1819-1852) was the Prophet-Founder of the independent Bábí religion, as well as the fore-runner to Bahá’u’lláh (1817-1892), the central Messenger of the Bahá’í Faith. It is impossible to understand the two figures as separate from each other; the Báb has a similar prophetic role in the Bahá’í Faith as Elijah or John the Baptist, although he also claims the station of a divine messenger.

As the film narrates, during a period of millenarian fervour in mid-19th century Persia, The Báb revealed himself as a “Manifestation of God” who fulfilled expectations of the return of the “Hidden Imam.” His ministry was spectacular in its social and religious impact, and extraordinarily brief in its tenure. Thousands of Persians converted to his cause, and he won over the allegiance of common people as well as respected clerics and political elites. His teachings had a profound mystical dimension, emphasizing that individuals should purify their inner lives and commune with God without intermediaries. The Báb abrogated Islamic law, announced the equality of the sexes, and prophesied the imminent appearance of another Prophet: “Him Whom God Will Make Manifest.” The Báb was 24 at the beginning of his mission in 1844, and was 30 when executed by a regiment of soldiers at the direction of the Persian Shah.

After the public execution of The Báb in 1850, the Persian Government increased its persecution of his followers. It imprisoned and exiled Bahá’u’lláh, who later revealed himself to be the one foretold by The Báb. The beleaguered Bábí community almost universally recognized Bahá’u’lláh, when he announced his mission in Baghdad in 1863. The Bahá’í Faith traces its origins to the tumultuous and transformative ministry of The Báb, although Bahá’u’lláh established the spiritual and social teachings that form the core of the religion today.

The Gate conveys the historical narrative of The Báb’s Revelation with great verve. There is a propulsive energy to the film that reflects the excitement one must have imagined it to feel like at the centre of a religious revolution. It narrates the life and ministry of The Báb essentially chronographically, interspersing commentary, historical re-enactment, and photography. The commentary is primarily offered by Bahá’ís, some of whom are widely-published academic historians. The interviews are highly effective, and the film-makers can be complemented on making a coherent narrative out of a diverse cast of subjects. The photographs help to convey how recent, in historical terms, many of these events were.

The decision to employ actors to represent some of the early followers of The Báb – akin to Christ’s disciples – is one that I would not have made, primarily on aesthetic grounds. The film didn’t require these re-enactments, and having actors speak in accented English was a distracting and ersatz aspect of the film.

When it comes to the narrative of the film, there is little to quibble with in regard to the facts. The film is informative, accurate, and instructive. A knowledgeable Bahá’í would also have few complaints about the story-telling.

However, there were two aspects of the narrative that I would have approached differently. The first pertains to miracles. The Báb, as the film notes, urged his followers not to attach importance to miraculous events associated with his ministry. There are a good number of such events recorded in Bahá’í histories, some of them confirmed with third-party reporting. However, the fact that The Báb insisted on more than one occasion – including in his final trial before his execution – that miracles should not be held as proof of his mission, should invite caution about how these stories are employed. While miracles are not unduly emphasized in the film, but they are mentioned so frequently in the course of the narrative as to attribute to them an importance that is simply unnecessary for historical (and theological) understanding.

A second issue is about the broader framing of the film, as about the “revolutionary” figure of The Báb. Indeed, many Western observers became enthralled by the romantic and dramatic story of The Báb. Sarah Bernhardt, Edward Granville Browne, A.L.M. Nicolas, Ernest Renan, Leo Tolstoy, Matthew Arnold, and George Curzon all wrote about The Báb. However, this is not how The Báb saw his own mission, nor is it how Bábis viewed themselves. They were not seeking revolution. Where they were forced into battle with the Shah’s government, it was in self-defense.

The Báb’s entire mission, as he declared, was as “the humble Precursor” to One greater than Himself, writing, “Well is it with him who fixeth his gaze upon the Order of Bahá’u’lláh, and rendereth thanks unto his Lord.” Indeed, “The Báb” itself is a title taken by ‘Ali-Muhammad, the youthful merchant from Shiraz with a lineage reaching back to both Abraham and Muhammad. The title means “The Gate”. That Bahá’u’lláh does not become a serious subject within the film until more than half-way through was an oversight by the film makers.

Such editorial decisions are, however, aspects of the challenge of making art about the luminous and transcendent figures who have been the embodiment and reflection of God on earth. To criticize these decisions is not intended to discourage the enterprise but to probe into the question of what it means to comprehend, understand, and interpret religious history for a modern audience. Living as we do in secular time, how do we make sense of these great and consequential disruptions in human history? They signal more than just social and political revolutions. They entail the Word of God itself reshaping how entire populations begin to view themselves, their societies, and the possibilities for the future. Religious films have to convey more than information; they need to also contain within them the spark of hope, possibility, and fulfillment that resides within every Revelation.

The Gate can only be regarded as a success with regard to its aim of telling The Báb’s story to new audiences. The questions it raises and leaves unanswered will create opportunities for future film-makers to tell their own stories. As 2019 will mark the bicentenary of the birth of The Báb, there is every reason to expect an outpouring of artworks and creative efforts to celebrate the life and teachings of this extraordinary figure in religious history.