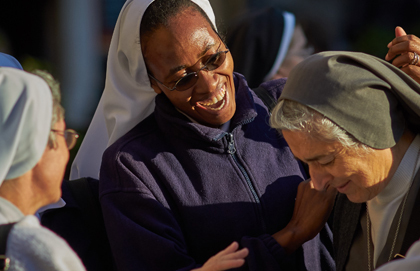 Katie Gordon: The Nuns and Nones project emerged from a curiosity of what would happen between Sisters and Millennials if they were able to be in a room with one another. There was this inkling that there we had something in common that we wanted to figure out.
I was living in Grand Rapids, Michigan doing interfaith organizing as a non-religious Millennial when I first encountered the Nuns and Nones movement. I was really seeking community. I was seeking connection, and sort of by accident I ended up meeting Sisters.

I was in a climate march in the city and carried the banner with a Sister. She shared that she worked at the United Nations for 15 years. She had this incredible history advocating for human rights. I was interested to learn more about her life and her journey, so we had tea. I remember nervously coming out as an agnostic or maybe even an atheist. I didn't know how she would react to that.

She said, "Oh, that's okay. Some days I am too." I was so surprised and suddenly so comfortable sharing that with her. There was an opening for a deeper conversation from there. Knowing the Sisters and their openness to people like me who were wandering and seeking.

I had many friends who were millennials and were organizers, activists, and social workers, who were already facing exhaustion through the deep work they were doing in our community. I thought they would benefit from having relationships with Sisters. They might benefit from having this broader sense of time, of how to sustain ourselves in social movements.

We started gathering within a few months after that initial tea with the Dominican Sisters. Around that same time, I connected to other Nuns and Nones gatherings, and one particular gathering held at Harvard Divinity School. We shared about the possibilities we saw and started moving together into what became a larger Nuns and Nones initiative.

C: As I understand it, there appear to be three different components to this project: the building of community, a research initiative, and a pilot residency. Help us understand how these three components enrich and overlap with one another?

KG: They each feed into one another. The building of community is creating connections that happen both in person and digitally. There have been gatherings in a dozen or so cities at this point. Those have all looked very different but have generally included anywhere between ten millennials and Sisters.

The research initiative came out of our interest in digging deeper into some of the questions that were emerging in those community spaces. Through our research, we are attempting to dig into possibilities and models for intergenerational stewardship of sacred spaces. One thing that has emerged out of nearly every gathering we've hosted is this identification of the Sisters' deep question about the future of their community.

How their charism will live on, or even how their physical assets, their buildings will continue in the future, as their numbers are diminishing. At the same time, millennials express a hunger for deeper communities or community living. It seemed like such a meant-to-be meeting of the needs and desires of these two groups. That's where the pilot residency comes in. One of the ways we are asking the question regarding the stewarding of sacred space is to just try a pilot residency.

C: I understand that in November 2018 (so recently!) five millennials moved into Mercy Center in Burlingame, California to live alongside the Sisters of Mercy. Would you share a little about how this residency is going?

KG: I visited for a couple of weeks in January. The residency is beautiful and also has its challenges as all communities do. I think that it's been exactly what we were hoping for. We were hoping for a space to imagine the possibilities that exist to build deep connection and deep community in order to listen to where it is calling us moving forward.

We have five millennials living there who are connected to broader networks that, by proxy, get to see this way of life and be a part of it as well. They get to have tea or lunch with the Sisters and get to know the community.

C: What is the conversation that you are trying to facilitate between these Sisters and millennials?

KG: The conversation has changed and evolved over time based on what participants have brought into the conversation. Originally, many of our first gatherings were started with a simple prompt of: “What question are you holding? What wondering are you holding deep within yourself that you want to share with us?”

These gatherings are a space to hold our questions, to hold our yearnings and desires, and this has then led us to ask new questions and have a new conversation. We have begun to ask: “What can we create together?” This is not just a beginning but about creating something entirely new.

For the Sisters, I think it relates to a bigger question that they're asking about the future of the religious life and the future of their order. Where is new life emerging in religion and spirituality today? I think they're seeing some of that new life embodied in community.

C: What has been the biggest challenge of this initiative thus far?

KG: There are plenty of challenges to sort out logistically but on a base level there’s a challenge of just how big and scary these conversations are. A lot of what we're talking about, particularly around this idea of the future of religious life or the transitional moment we find ourselves in are scary. They involve change, uncertainty, and mystery. A lot of trust has to be built in order to enter into these conversations together.

I feel that we've been held by the spiritual tradition of the Sisters. They embrace mystery and we have been held by their ability to enter into that mystery graciously. There has been a lot of grace despite the challenge.

A lot of churches are meeting this narrative of 'diminishment' with great anxiety and are asking, “How can we bring these institutions back in to where we are?” The Sisters have a totally different approach. They’re simply asking, “What is going on? Where is new life emerging and how can we support that? They're not overly attached to the institution, but they are really invested in the mission, the charisms, the values of their tradition. So, they look to where that's being embodied, and put their energies behind that.

C: What has delighted you most about being engaged with this project?

KG: I just love having Sisters as some of my closest friends and mentors. They have such a joyful approach to life but retain their deep introspection at the same time. I think they have a model for how I hope to live my life. I find myself so happy and laughing all the time when I'm with Sisters. This has so delighted me, especially as someone who was raised Catholic in the Western Tradition. This is not the tradition that I left. It was very serious or somber in church. I am now understanding a totally different model of church through the Sisters, and continuously surprised and delighted at what I'm learning from them.

C: What has most surprised you about the project thus far? What might surprise readers who are unfamiliar with this movement?

KG: There is so much! The women religious that we work with defy most stereotypes that the general public has about Catholic Sisters. Most don't wear habits. Most have their own sort of ministry. They're stretched outside of the traditional ministries in education or in health care and are really doing some deep social justice work in many communities. So many people have the image of Sister Act or any other popular image of Nuns. There is such a difference.

I’d encourage your readers to meet an actual Sister. I'm amazed by the conversations that women religious are having. I think that a lot of people would find resonance with their spiritual practices once they got to know them.

C: Are there questions that have emerged across your gatherings, research, and residency that you would like to encourage our readers to consider?

KG: I would like your readers to wonder how inter-generational relationships or friendships are showing up in their lives? I didn't have an elder figure in my life until I had Sisters. It’s important to say that not all Sisters are on the older end of the spectrum. There are plenty of Sisters that are younger, millennials even, but by and large the average age of Catholic Sisters is something like 78 or 79. So, largely Sisters represent an older generation.

It’s important for us younger people to have a mentor in our lives as we come into our vocations, as we continue to discern how and where we want to spend our lives. Theses voices and their questions have been essential to our own spiritual and moral formations.

C: Do you have a story that illustrates what you are trying to achieve with this initiative that you often reach for? If so, would you share it with our readers?

KG: I moved away for divinity school shortly after we had our first few Nuns and Nones gatherings in Michigan. It was hard and challenging to leave and yet I knew that when I landed in my new city, I could find sisters and feel at home again.

As soon as I landed into Boston I was connected with a few sisters of St. Joseph and was invited to their chapter meeting, which only happens every five years. The gathering is devoted to discerning what the signs of the times are and what they're being called to do. I was invited as a stranger into the chapter meeting and I felt immediately welcomed into this new city because of the Sisters. They were some of the first people that I built community with here.