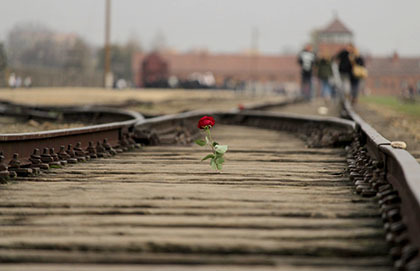 This article is part of an ongoing series on faith leaders who have demonstrated courage living faith in the public square. In partnership with the Cardus Religious Freedom Institute, Convivium magazine will regularly publish these profiles from contributors across Canada. To submit a story to the series, email Aaron Neil at aneil@cardus.ca and Rebecca Atkinson at ratkinson@cardus.ca.

“Let us remember that love lives through sacrifice and is nourished by giving… Without sacrifice, there is no love.” – St. Maximilian Kolbe

What comes to your mind when someone mentions public faith or religious freedom? You may picture an eccentric preacher, an individual approaching you on the street with a small booklet when you are in a rush, or perhaps that one friend gracing you with another tiresome and unwelcome lecture about your life’s trajectory.

While these stereotypical examples may by definition be public or stem from an expression of religion, public faith does not need confinement to the small corridors of negative connotation. Structures supporting public faith and religious freedom could be thought of more appropriately as mechanisms for individuals to live out their convictions and engage in meaningful, respectful dialogue.

Our faith is not to be hidden in shame behind the walls of our places of worship and this means that we naturally harmonize it with our other faculties. This does not imply a forceful approach, but rather an open and honest approach. It is impractical to pretend that one’s perspective on the deepest meanings of existence will not have a bearing on daily life. By extension, I would like to challenge the hostility we often see toward expressions of public faith. I believe this may be done with a story of someone who has inspired me, a story of brave charity made possible by the public faith of St. Maximilian Kolbe.

The revised picture of public faith I hope to leave you with is the story of Kolbe. While Kolbe has solidified his legacy within Catholicism in several ways (e.g. contributions to Mariology, religious orders, etc.), I would like to focus on the events leading up to his death at Auschwitz during the Second World War.

Kolbe was captured and eventually taken to Auschwitz. There, he was a source of comfort and strength for his fellow prisoners in the daily hardships and horrors they faced. His faith and leadership in prayer calmed them and provided a sense of hope in the darkest of times. Three months into his stay at the camp, his leadership eventually culminated into an outstanding act of sacrifice.

To make an example of a prisoner who escaped from the barracks, the guards picked ten prisoners at random for starvation and execution. One of the chosen prisoners broke down in tears and protested that his family deeply needed him for support. Moved with love and pity for this stranger, Kolbe stepped forward and while his exact words may not be known, they can be paraphrased as, “I am a Catholic priest from Poland; take me instead as this man has a family.” He proceeded to give his life over to take the place of this stranger whom he did not know.

When Kolbe was put in his cell to be starved with other prisoners, he was heard leading them in prayer and hymns each day. While the other prisoners gradually died of starvation, Kolbe would not die, even after two weeks. The guards wanted the cells cleared and were irritated that Kolbe was somehow beating death. As a result, they injected him with a lethal dose of carbolic acid. He died on Aug. 14, 1941 and Pope John Paul II canonized him a saint on Oct. 10, 1982.

Faith, particularly bold and public faith, can truly be a pillar of strength in times of tragedy. In these times, it asserts the purpose and intrinsic value of human life and combats the temptation to view it all as a cruel and meaningless nightmare.

We could surely use a few more heroes like St. Maximilian Kolbe and his story echoes with importance to this day. In my life, the extent of my tests of faith include whether I have enough courage to live it out, communicate what I believe to be true, and overcome the fear of ridicule and alienation. When comparing this task to the tasks faced by Kolbe, I think of my own struggle as rather juvenile. Nevertheless, while the struggle in the present day is different and far easier than Kolbe’s struggles, he serves as a role model to remain strong in an increasingly challenging climate for religious freedom.

Some may claim that Kolbe’s heroism is not exclusively linked to public faith and that there are other historical heroes who have shown great courage without such a faith. While this may be true, there is no doubt that Kolbe and many others like him have achieved an exceptional level of moral strength by virtue of their dedication to their faith. A beautiful quality of Kolbe’s story is that it represents a faith so accessible that it sparks inspiration in believers and non-believers alike. Thus, Kolbe’s faith was the source of energy that made manifest the virtues of courage and charity on display for all to see.

As alluded to above, some of the most powerful acts of public faith are those that integrate faith with actions that are admired by those outside of the faith tradition. The heroism exemplified by Kolbe is the specific boldness and conviction that could enable someone to give faith a chance. Many years ago, when reflecting upon this story and sorting out my own feelings, I posited the following thought: If this man’s faith provided him with the necessary courage to act in this manner, perhaps there is something to that faith, and perhaps it is something worth my further investigation.

I am inspired by this story because I truly believe that witness is the most effective way to invite those who have hardened their hearts toward faith; words will often not be enough for them. I am convinced that a strong faith bestows a certain resilience that may otherwise not be accessible. I have witnessed public faith in the role models of my own life and I am eternally grateful to them. Their freedom to live and share this gift has truly blessed my life and I know that it is a freedom worth defending.

The story of St. Maximilian’s faith calls all of us to a bold selflessness and sacrificial love. If this is what Kolbe’s faith allowed him to do, it sparks a hope that we may flourish, even if in small steps, in the same spirit of courage and charity a little more with each day.