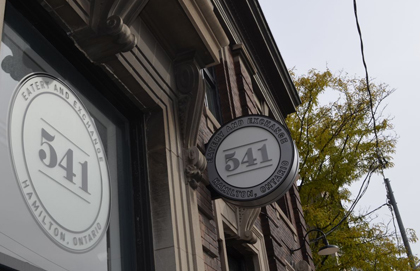 Community With Your Coffee November 25, 2015  |  By Stephanie Schoenhoff

It’s a not-for-profit restaurant that serves its community healthy, affordable meals (and really, really good coffee) in East Hamilton. 541 provides the city with communal space for people of all socioeconomic backgrounds to engage in a meaningful exchange. Jenn is now one of the managers,  who says she never imagined God would fulfil her dream the way he has.

“I had no idea of the extent that God would go to with this,” she says, gesturing at the well-designed, warm café surroundings.

Ten years ago, while volunteering at a Church down the street, Arnold had a vision of starting a café in the neighbourhood where there was previously very few safe places for single mothers and their children to grab a healthy warm meal. When her friend and fellow manager, Miranda Crocket, approached Jenn about the initiative, she felt God was making her dream a reality.

There are countless stories of redemption springing from the café, she says.

Jenn points to a man behind the counter (who wishes to remain unnamed) who is busy making sandwiches and clearing the lunch line.

When the café started, this cook could barely come in to 541 as a customer because his anxiety was so high. He would usually pop in early mornings before the rush and would leave before too many people came. He used to sit by himself at a secluded table by the wall.

Gradually, the staff and volunteers at 541 got to know the customer, and discovered that he loves food and wanted to learn more about cooking. When the staff heard about this, they started a chef apprenticeship program so he could participate in the restaurant in a service capacity.

A year and a half after spending time at the eatery, he was baptized at a church that many people in the 541 community attend. The man who stood in the baptismal was a transformed version of the person who used to come and sit in the corner of the café.

“He stood in front of a room full of people. From where he had been before to getting up in front of a group of people and speaking, was incredible,” Jenn says.

During his testimony he thanked 541 and all the people who have come alongside him. It reminded Jenn of the way God has been moving in the community as staff and volunteers offer their hands to serve.

“The day of the baptism, the pastor of the church spoke about story, and how all of our stories piece into a broader story, which is God’s story,” she says.

The message made Jenn think about how 541 is part of God’s story in this community, and how this is just one of so many people whose lives have changed because of this place,”

“My life has changed… I’ve never experienced community the way that people are communal here.”

That community makes 541 much more than another place to find a warm drink, although it’s good for that too—it’s a hub for social change and a beautiful place to watch God at work.