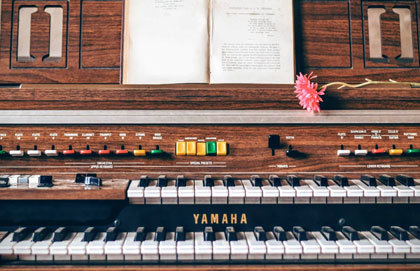 His feet on the pedals, his fingers on the manual, Derek Harrison leans into the organ at St. John’s Anglican Church in Fort Qu’Appelle, Sask. and begins to play My Life Flows on in Endless Song, a favourite hymn that could well serve as a metaphor for his life.

The peace of Christ makes fresh my heart, a fountain ever springing. All things are mine since I am His, How can I keep from singing?

For at least 65 years (some would argue even longer), Harrison has had a leadership role in the community. He's a Mason, a member of the Lions Club, and has been delivering Meals on Wheels for three decades.

A man of quiet, deep-seated faith, he replaced the previous church organist, Louise Dyer, in the 1950s. He has been there almost every Sunday ever since. Now, for the first time in 135 years, St John’s will be without its own parish priest. Only a dozen people attend Sunday Mass, half of them sing in the blue-robed choir and most are in their 80s and 90s.

The diocese says it can no longer support a salaried priest in the parish, so when Warren Heustis leaves this summer, he won't be replaced. But lay services will continue.

"It’s either me or nobody. I don’t know what will happen now that we’ve lost our priest. There is no one else, is there?"

He began playing the piano by ear when he was eight. He could sight read and pick out a tune, "not very well, but I could pick it up." Perhaps he inherited the talent from his mother, who studied in France and took music lessons from the organist at Notre Dame Cathedral in Paris before she spent a year in Russia as a governess to Leo Tolstoy’s children.

She answered an advertisement in the London Times "to teach English gentlewomen the art of farming," and came to Saskatchewan in 1910. She married in St. John’s Anglican Church in 1914.

Harrison was baptized in the church in 1924. He took piano lessons for eight years during the Depression but never wrote a Conservatory exam. He played the organ in Sunday School, and while still in his teens began grinding out hymns on a little portable pump organ for patients in two nearby hospitals.

"I’d have to take the organ, lug it around from one hospital to the other, set it up. One day the choir director was waiting for me to arrive and when she saw me coming down the hall, she shouted, ‘Oh there you are, did you bring your little organ?’ I didn’t know what to say."

St. John’s is a small fieldstone church in the Qu’Appelle Valley that was built during the Riel resistance in 1885. Even before it was completed residents of the town 40 km east of Regina, fearing a Metis raid, sought refuge behind its rough stone walls until the 91st Battalion marched 20 km in five hours to protect the town, causing “a shout of joy from the anxious townsfolk who had been wondering just what might take place."

One of St. John’s first wardens, Capt. John French, was killed at the Battle of Batoche. His funeral was held in the church even before the building opened for worship.

The storied church seats about 100. Yet shortly after Harrison became the organist, the priest of the day, described as someone who saw himself as both England’s and God’s representative, decided to have a pipe organ installed. Harrison wrote to the Casavant organ company in Montreal.

They were not interested. The firm of Hill, Norman and Beard, a celebrated British organ building company in Norwich, agreed to build "the smallest pipe organ they had ever designed." It would take a year to build and two weeks to install. It would cost $30,000, the equivalent of about $281,000 in today’s purchasing power.

"I don’t know where the priest thought that kind of money was going to come from, but it was never built," says Harrison.

When he was in his late 20s, Harrison considered becoming a priest, but after a year he recognized "it wasn’t for me." He has, however, led a lay service.

"The priest pointed to me and said, “next week you do the service.” I did it, I went into the pulpit and preached but I forgot three parts of the liturgy. I think it was the shortest service at St. John’s."

There have been a few gaffes along the way. There was the Sunday he fell asleep sitting at the organ during the sermon. While the priest was speaking. Harrison’s arm came down on the keyboard with a roar.

"After the service, the priest told the congregation, ‘I want to thank the organist, but I am not sure what to thank him for.’”

Then there was the time he played the hymn before him, only to discover the choir and congregation were singing something else entirely.

Twenty-five years ago, the church replaced its traditional hymn book with Common Praise.

"We had a meeting of all the organists in Saskatchewan and they said ‘if your favourite hymn is not in it, put up your hand.' A lot of people in the room raised their hands. I don’t know if the new hymnbook is better than the old or not. It never hurts to try something new. I just figure my job is to carry out what they want me to do. One of our priests picked the hymns the first time, and after that let me pick what to play. Another priest e-mails me the list of hymns. I carry out what they want me to do."

When Prince Edward worshipped at St. John’s in 1978, Harrison was at the organ. And in 2012 he was awarded the Queen Elizabeth Jubilee Medal for his contributions to the community.

Harrison says he’ll continue to play even if he is the last person left to worship in the church.

"Do you know the difference between a terrorist and an organist?" he asks with a chuckle. "You can negotiate with a terrorist."