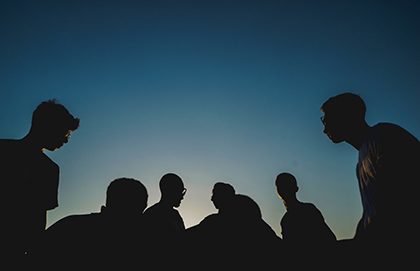 This article is the fourth part of an ongoing series on faith leaders who have demonstrated courage living faith in the public square. In partnership with the Cardus Religious Freedom Institute, Convivium magazine will regularly publish these profiles from contributors across Canada. To submit a story to the series, email Aaron Neil at aneil@cardus.ca and Rebecca Darwent at rdarwent@cardus.ca.

As a 19-year-old university student, I chose to pursue and practice my faith again because it offered something to me that this world could not.

On Oct. 14, 2017, I attended an evening of prayer and had an encounter with God in the holy sacrament of the Eucharist. I had never before felt so much warmth and joy in my heart. I quickly recognized that I needed to orient my life towards the God I had once rejected.

I have been in search of love and truth for my whole life. And ever since that night of adoration, my life has been filled with true purpose. Blessed be God! A tradition of the Catholic Church brought me (a once-professed atheist) back to the faith that I lost in my adolescence. More specifically, the authenticity and substance offered by the Church changed my life.

Since then, my spiritual life can be described as the pursuit of Jesus Christ through the longstanding traditions maintained by His Catholic Church. This includes the deep appreciation for the Holy Mass, classic chants, and silent prayer.

After identifying these pillars of my spiritual life, I sought to explore them further. Luckily for me, YouTube offers a variety of Catholic personalities who provide practical advice for those seeking more. One of the personalities I thoroughly enjoy is Brian Holdsworth. Founder of Holdsworth Design, a small business that helps clients with media design, he regularly posts videos concerning the Church, pop culture, and overall faith.

Hailing from Edmonton, Alta., Holdsworth is a young father who is easily relatable to every audience. His videos are easy to watch and he is always respectful to the subject he is addressing. Immediately after I watched some of his videos, I began to reflect and realized I needed to apply these lessons that I have learned.

This was because I began to notice that my spirituality was different from those in my local Catholic community. It was not because they did not share my love for the Mass, music, and prayer. In fact, that was far from it. What was different, though, was the approach to living out the Catholic faith. Many attended Mass in English while I was drawn the Mass in Latin, others embraced modern “praise and worship” music while my preferences sat with chants and classic hymns, and others used their words and voice to pray while I cultivated silence.

Why is there a difference? Is one way better than the other? Am I right and everyone else is wrong? Am I lunatic for wanting liturgy in a language I cannot speak?

These questions raced through my mind with no clear answer. Not only that, but I found myself unprepared to have sensitive conversations over these differences with those of the same faith tradition. I was at times both condescending in my own speech and unnecessarily judged by others for my preferences. After all, we are all human and bound to make mistakes.

Despite these setbacks, I still wanted to discuss these differences in spirituality. I felt that, even though these differences exist, that doesn’t mean we can’t have a conversation. Not to prove that one is better than the other is, but simply to articulate my side without looking like a snob.

Holdsworth’s videos came at the perfect time for me. It felt like he was giving me the answers to the problems that I was encountering. He personally influenced me due to our paths to the Catholic faith being very similar.

To summarize his spiritual journey, Holdsworth experienced an encounter with God in his early studies at university and felt compelled to pursue the Christian faith. He then identified that despite the many denominations of Christianity, the Catholic Church was the one for him. Holdsworth frequently discusses the authenticity and substance provided by the traditions of Catholicism such as the reverent liturgy, sacred music, and old architecture.

Holdsworth has posted over 110 videos that concern many themes, but his forte is addressing topics relating to tradition and the Church. His top videos, in my opinion, are Why Christian #Liturgy is So Important, Make Church Music Great Again, and How Christianity Led to Science.

Judging by the titles of these videos, it can definitely seem like he is posting rants proving how traditional taste is superior and that everyone should listen to him. But his videos are quite the opposite (he even has a serious video called Why You Shouldn’t Listen to Me). He is well spoken, engaging, and best of all, respectful. Holdsworth touches on sensitive topics, like liturgy and music, yet he presents his views in a careful and charitable way.

He backs up his claims with reasoning and logic that appeals to the Christian heart. Holdsworth is respectful, never attacking a certain group or individual he disagrees with.

But that doesn’t mean he shies away from bold statements.

In Why Christian #Liturgy is So Important, he comments on the question of going to a liturgy that panders to a person’s individual taste. His examples include going to a Latin Mass if one likes chants or a contemporary Novus Ordo if one likes folk music. To respond to this, he says, “I didn’t become Catholic because it was the most appealing to me. I became Catholic because it’s true. Likewise, I’m not trying to find a liturgical environment that suits my taste. I'm trying to find one that best reflects the objective reality of God's beauty.”

If you watch the rest of the video, which I recommend you do, you’ll see that he makes the argument for a more traditional liturgy. When watching the video, however, he doesn’t directly tear down the point he disagrees with. He is certainly choosing a side, but not in a way that is condescending or mean spirited. He simply voices what he believes and backs up rhetoric with evidence, not emotion.

Holdsworth’s videos are a reminder that we can be passionate about a subject without being a jerk about it. I have had friends who really enjoy his videos, yet disagree with some of the points he makes. That is a great sign of someone who can share his or her perspective with respect.

Holdsworth inspires me for two different reasons. His videos help articulate why I have a certain love for traditional aspects of the Church. By sharing his story and posting videos about passions of mine, I don’t feel like an outcast anymore. In fact, I can wear my orthodoxy on my sleeve without insecurity.

Arguably more important, though, he inspires me to be respectful in how I present my perspective. Before watching his videos, I at times would be condescending and an outright jerk about believing my way was the right way. Seeing the way Holdsworth presents his arguments in an objective and respectful manner, though, I can’t help but try and emulate his calm spirit.

As I said before, these topics of Catholic spirituality are very sensitive. I hope that by sharing my story, and very briefly Brian Holdsworth’s, I was able to convey one aspect of diversity that Catholicism contains. Whether through pure tradition, contemporary, or even both:

All are welcome into the Catholic Church regardless of their past.

All are welcome to live out their Christian faith with the spirituality God has given them.

All are welcome to know and love Jesus Christ.