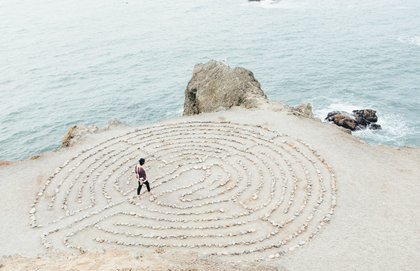 In today’s busy and noise-filled world, when did you last purposely take time for silence?

About 30 people in Calgary attend an early morning mid-week contemplative service. The hour-long service includes teaching, reading, music and a block of silence. Usually about 20 minutes, the silence portion may last longer or shorter depending on other content and what’s going on.

“We had a series of deaths in the community over the last few weeks so last week silence was bigger, just to be able to hold that,” says Susan Cooper, contemplative ministry lead at Hillhurst United Church. Through Christmastime, snowstorms, and extremely cold weather the group gathers every Wednesday at 7 a.m.

Cooper’s earliest exploring of silence was in the Buddhist tradition, with years of mindfulness practice. The Calgary contemplative services started almost a decade ago, and a variety of people from different faiths or no faith come. When they first started holding the services Cooper’s spiritual teacher said Calgary was on the leading edge.

From an ancient perspective, silence runs through all traditions and religions, she says. When we drop past the chatting mind and past the noticing mind there is a spaciousness where we can contact a unified mind. Some people call it God, the Spirit, the unified field, the prayer field or the now. In other words, “this thing that’s much bigger than us from which we are created,” Cooper says.

Many people find silence frightening to be with, she says, and may not be open to exploring it until experiencing the peace and rest it can offer.

“People find their way to this kind of practice when they are ready. It’s not necessarily something that twigs right away, in fact it turns people off if they are not ready.”

One of Cooper’s favourite stories to share about silence is from Vietnamese Buddhist monk Thich Nhat Hanh. Monks were sitting in meditation when a small troop of French soldiers burst in looking for the Vietnamese insurgents under instruction to arrest or kill them. When not a person in the room moved, the shocked soldiers went out into the yard to wait until the meditation time was over. Later, a young French soldier shared with Thich Nhat Hanh he felt the presence of what these monks were doing and it transformed him.

“But for most of us it’s incremental. Slowly we fall in love with this depth and the silence as we clear the clutter away,” Cooper says. “There’s transformation that happens there that you can’t imagine in advance. Something about the gathering together opens up in ways that we can’t open up ourselves and we hold each other and deepen love of being together.”

Daybreak Contemplative Service is hosting a Feb. 8 open service at Hillhurst United Church as part of Calgary’s inaugural UN World Interfaith Harmony Week. Cooper says she hopes those who attend the open service get a taste of what silence really is, and an awareness of another approach to worship and spiritual life.