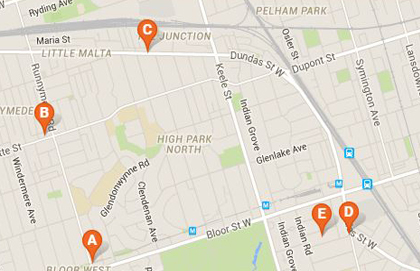 Himy Syed has been involved in Jane’s Walks since its beginning in 2007. The public, citizen-led tours were born from the legacy of Jane Jacobs—journalist, activist and author, best known for her urban geography work.

When Jacobs died in 2006, Torontonians decided to lead a walk through the city in her honour. The tribute has grown to a global movement, with walks led in hundreds of countries across multiple continents.

In her advocacy work, Jacobs urged the public to get out and walk the streets of the city. Walk and look—really look—at what was going on around them. This was, she said, one of the best ways one could get to know oneself and others.

For Himy, long involved in the effort, a Jane’s Walk would be the perfect platform to share the history of his Muslim faith to fellow Torontonians when the opportunity arose.

He felt compelled to lead the walk after a Canadian woman in Toronto was verbally harassed for her Muslim faith outside her home. She was yelled at by a stranger and told to “go back to her own country,” while walking with her child on the sidewalk.

“She was in her own country. She is a Canadian. This is her home,”  Himy said.

“This is what inspired me to lead a Jane’s Walk on the history of the Muslim community in Toronto.”

Himy’s desire for the tour was to teach Torontonians that the history of Muslim’s in Canada is part and parcel of Toronto’s history.

“Muslim’s have been in Toronto longer than people think,” says Himy. “We have fourth, fifth generation Muslims in Canada now.”

Himy led the walk in December, which dozens attended despite the cold. For those who were there, the walk was a moving experience.

Himy’s tour led Torontonians to The Albanian Muslim Society of Toronto, where they discussed the pivotal role of its founder, Reggie Assim. They then made their way to the site of the first Masjid in Toronto, The Dundas Street Mosque, which is now home to a wine bar. At this stop, a descendant of one of the founders of the Dundas Street Masjid gave a moving presentation outside the former place of worship. They also visited Toronto’s first Halal butcher shop, where they reflected on the growth of the Halal industry, which has come a long way in just a number of decades.

For Himy, the walk marked a significant moment in history, where Muslims and non-Muslims alike were able to recount the rich and dynamic past of the Muslim community. It bridged religious and non-religious communities together in a way that hadn’t been done before in the city.

“That walk can never be replicated exactly the way it happened. It was very special,” says Himy.

Himy hopes that public efforts like the tour will help curb assaults like those faced by the woman outside her Toronto home, and others continually faced by Torontonians.

As an immigrant to Canada, Himy knows what it’s like to be Canadian but still misunderstood. He doesn’t see why his Muslim faith, or place of birth, should take away from his citizenship.

“I like to tell people that I grew up on an island near some tennis courts—I was born in Wimbledon to Indian Parents and grew up in Toronto. What does that make me?”

He paused. “A Canadian. It makes me a Canadian.”