At first, I was surprised to find out that Henri Nouwen—world renowned scholar, writer and theologian—is buried at St. Johns Cemetery, in a small churchyard in Richmond Hill, Ontario. 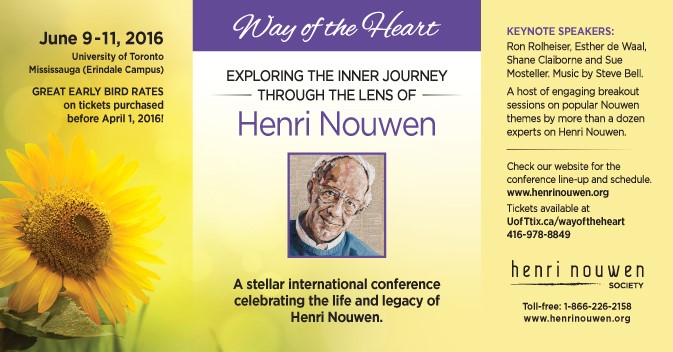 I suspect that other Nouwen readers like myself might ask why this is his resting place. He was, after all, a luminary in the world of ethics, psychology and pastoral theology, a Catholic priest and one of the world’s foremost Christian authors. There must be someplace else he would have wanted to lie after his death in 1996.

He was born and raised in the Netherlands and spent over two decades teaching at Notre Dame, Harvard and Yale. His international acclaim reached to far more dazzling places than this Toronto suburb.

But if you look a little closer at the life and works of Henri Nouwen, his resting place makes perfect sense. The narrow path from Boston, where he taught the best and brightest of America, to L’Arche Daybreak, a small community of people with intellectual disabilities, is marked by some of the most significant spiritual experiences of his life.

There, at L’Arche, he would experience a deeper sense of belonging in this community than he ever did in the hallways of success.

It makes sense, then, that he would want to be buried beside a humble church in the Ontario suburb where he eventually found home.

Karen Pascall, Executive Director of the Henri Nouwen Society—an international organization promoting the life and work of Nouwen—invited me to sit with her and talk about Henri’s journey from worldly success to personal belonging. This was the same journey that led him to suburban Canada, and ultimately, changed his life.

Karen and I sat down in the sun-soaked common room of the Henri Nouwen Society head office just outside Queen’s Park in the heart of Toronto. We shared coffee and conversation at Henri’s desk—a large, square pine table where he wrote books such as Return of the Prodigal Son and The Way of the Heart.

Karen agreed that it may have been the summit of his experience, noting that through it, Nouwen found the “downward mobility” to which he was called. “I think the pinnacle of any of our spiritual experiences is when we do that, that downward mobility, that reverse, where we are no longer trying to prove our value.”

“I think what's interesting was that Daybreak did have something to offer him, it was completely new when he started there,” says Karen.

While Karen says she doesn’t think Nouwen ever lived ‘grandly’ per se, prior to moving to L’Arche, “when he arrived [at Daybreak], he was really going down. He was going to a place where he was solo, and then they assigned him one of the most difficult people,”

Even if his new community members at L’Arche had known he wrote books, they likely wouldn’t have been able to read or appreciate him. His sense of belonging had nothing to do with the height of his success or the breadth of his achievements.

“These people wanted him present. It didn't matter that he had written a book. It mattered that he was going to be home for dinner,” says Karen.

Part of the organization’s mandate is to foster the practice of solitude that Nouwen wrote so often about. It was Nouwen who taught Karen the concept of solitude as a spiritual practice.

“I remember, I think it was one of the first things that I heard from him, when I interviewed him, that stuck with me was the idea that I had this ‘inner room’. This deep place, and that I could go there to dwell with God and ask God what he wanted to write on the walls of my heart. I love that.”

On a broader level, the Henri Nouwen Society’s mandate is quite simple.

When you walk into the Henri Nouwen Society, you’re greeted by a quote at the top of the stairs that reads:

My hope is that the description of God’s love in my life will give you the freedom and courage to discover God’s love in yours. –Henri J.M Nouwen

Karen likes to think of her job as offering people an appetizing meal.

“It's quite ... I almost want to say delicious because the reality is that when you say, ‘I want you to find Christ,’ or ‘I want you to find the faith that I have,’ it's a very direct kind of thing. Whereas, when I say ‘I want to share with you a book,’ you are free to react anyway that you want. It's not a gospel. It's just one man's story,”

Karen herself discovered Nouwen through a book recommendation.

“I would always ask people who inspired me, ‘what are you reading?’ Because you always wonder what kind of stuff inspires you? What makes you think the way you think? That's how I found my way to Henri,” she says.

And you can tell by the way she speaks about Nouwen, that she is truly grateful she eventually found her way to him. All these years later, sitting at his desk, she smiles and sips her coffee with a peace that makes me think that she’s indeed discovered God’s love the way Henri would have wanted.

The Henri Nouwen Society is hosting Way of the Heart, an international conference on the life and work of Henri at University of Toronto Mississauga campus from June 9-11. If you’re interested in purchasing tickets, please register today.

Beyond the Usual Suspects

Beth Tzedec, a synagogue in SW Calgary chose to do something rather than nothing in the face of human trauma in Syria. They decided to sponsor a refugee family.

Pianist Chiara Bertoglio reflects on her two-fold identity, as both a musician and a Christian. When, as a child, she wanted to be the greatest pianist in the world, she now realizes she was trying to be something other than the actual, flesh-and-bone Chiara – and something other than what she was designed to be.