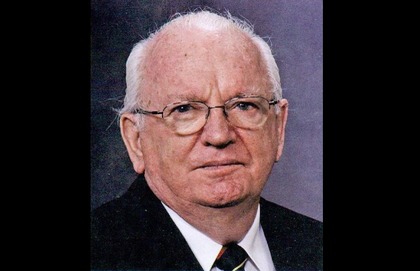 Charles Ellington is a “product” the Protestant Orphanage in Victoria and its “official” Sunday school, Oaklands Gospel Hall. He is a retired notary public and Victoria business and Christian lay leader who gave significant leadership to morphing the orphanage into the Cridge Centre for the Family, a contemporary faith-based cradle-to-retirement agency geared to special needs families.

Charles Ellington always said that he was raised in a 40-room mansion.

“We had a cook, two nannies and a gardener. However, it was not as great as it seemed…”

Home, for Ellington, from age three to 16, was the Protestant Orphanage in Victoria, British Columbia. His description, to a point, was accurate: The Orphanage was an imposing red-brick structure atop a rocky hill three kilometres northeast of the provincial capital’s Legislative Buildings.

Ellington was not a real “orphan”. His hilltop home emerged from a complex set of employment and health issues sustained by his parents after their November 21, 1912 marriage in Winnipeg.

His father, John William (Bill) Ellington, was born in Nottingham, England. His grandfather was a butler to several families. Ellington describes his own father as “a bit of a rebel.” He moved to London at a young age and trained as a waiter in an exclusive restaurant. From thence, he crossed the Atlantic where he met and married Elizabeth Preston Ellington. At the time, he was a steward on the Canadian Pacific trains. They lived in various cities in western Canada. Their five children were born in Brandon, Winnipeg, Calgary and, the youngest, Charles, in Victoria.

Early into their marriage came World War I.  His father spent time in the trenches. He was wounded at Vimy Ridge and in the Battle of the Somme. Returning to Canada after the war, he found his wife sick and confined to a wheelchair. Furthermore, his steward’s job was gone and only periodic work was available, as a doorman in the Empress Hotel.

In desperation, in 1927, he threw a rock through a jewelry store window to get the attention of the authorities. It seemed to work. Folk at the Orphanage offered to help.

That began a decades-long relationship between Charles Ellington and Oaklands Gospel Hall. He committed his life to Christ, there, and was later baptized. In due course he became a deacon, an elder and superintendent of the Sunday school. During his tenure, the school grew to over 300 students and was a factor in building a larger church a block away with a new name, Oaklands Chapel.

And it was at Oaklands that he met and fell in love with Kay Fowler, to whom he was married for 48 years, until her death in 1998. They had three children, Grant, who died of cancer at age four, Rob and Steve.

Charles’ relationship with his parents ebbed and flowed. At times he was angry with his father but, as he matured, realized that the health of his mother was such that he carried a heavy workload. He held two jobs, at HMCS Dockyard in the day and in restaurants at night. For several years, Charles was able to live in his parents’ home, a small cottage on Walnut Street. It was there he experienced parental love, as his mother, at times wrapped her arms around him and “I thought I had gone to heaven.”

Oaklands, and the evangelical Christian community of which it was a part, was home to Ellington as a young adult and he grew exponentially in his leadership skills in that community. While he never acquired a university education, he took many courses related to the notary public practice he acquired and built up over several decades.

That practice became the bedrock from which Ellington could provide leadership in many community and faith-based organizations. He was commissioned as a notary public in 1958, having purchased his practice from J. Arthur Wild, who, himself, had been a Christian lay leader, operating from a Pentecostal perspective. Ellington retired in 1997, with his son, Rob, taking over the practice.

Most significant, among these leadership activities, given the place of his “home” as a young child, was his 25 years on the board of the British Columbia Protestant Orphans Home, with five years as board chair. Out of that tenure grew his role as founding chair of the board of the Cridge Centre for the Family.

And it was during that tenure that Ellington played a pivotal role in the transitioning of the Cridge from a traditional and now-outmoded orphanage to a multi-faceted government-assisted cluster of family services and facilities. Sprouting out on the rocky campus, around the big brick edifice was housing designed for single parents, a commodious child day care facility and, in due course, a seniors housing wing.

Ellington’s particular role, during those transitioning years, was to be a bridge between the government and the faith-based community, to see that the values of that community did not get lost in the process of extending its available services. Much of that “bridgework” resulted from his other leadership activities, including:

Ellington gave credence to the need for attention to detail in an article he wrote in the Winter, 2006 issue of The Scrivener, the publication of The Society of Notaries Public of British Columbia. Entitled “Looking Beyond the Obvious”, he described a case involving checking into the detail of a particular approach to contract law. He was able to help a client sub-divide a residential lot that had been thought to be covered by a restrictive covenant not to do so.

He concluded by noting: “So in matters Notary, things are not always as they seem. We need to keep our wits about us and always look beyond the obvious.”

In his retirement years, Charles has enjoyed his grandchildren, among them Spencer and Taylor Ellington, who grew up as NHL-aspiring hockey enthusiasts. Spencer was hampered in that quest through a debilitating illness. But he pointedly inspired his brother, Taylor, to fulfill both their dreams. Taylor was a Round 2 Draft for the Vancouver Canucks in 2007 and has, in 14 seasons up to 2014, played defence in eight minor league teams in Canada and the United States. He is currently in Denmark with the Esbjerg team. Grandpa, from the care facility where he now lives, just blocks from where he practiced as a notary public, continuously keeps tabs on him, expecting that Taylor will one day make it to the National Hockey League.

Lloyd Mackey has close to half a century of experience in community, faith-based and leadership journalism, including 15 years working out of the Canadian Parliamentary Press Gallery in Ottawa. Books he has authored include These Evangelical Churches of Ours (Wood Lake Books, 1994), Like Father, Like Son: Ernest Manning and Preston Manning (ECW, 1997) More Faithful than We Think: Stories and Insights on Canadian Leaders Doing Politics Christianly (BayRidge Books, 2005) and The Pilgrimage of Stephen Harper/Stephen Harper: The Case for Collaborative Governance (ECW, 2005/2006). He is founding editor/director of the Online Encyclopedia of Canadian Christian Leaders, an outgrowth of his Doctor of Ministry (DMin) studies, completed in 2015 through Tyndale University College and Seminary. In 1984, he earned a Master’s in Business Administration (MBA) at Simon Fraser University. He and his wife, Edna, are trying to practice “active retirement” and an examination of “social architecture” in the emerging Central City urban core in Surrey, BC.

Photo reproduced by permission of Rob Ellington. Charles Ellington, as he appeared in a photo accompanying an article he wrote for The Scrivener, the magazine of the Notaries Public of British Columbia, in the Winter issue of 2006. The article recounted some of the results of “looking beyond the obvious” in assisting clients in property conveyancing issues.