In a concise blog post today, Ottawa journalist Brigitte Pellerin asks the essential journalistic and political question that looms from the verbiage fog of the SNC-Lavalin contretemps: Why?

Pellerin’s “why” is directed specifically to the bizarre episode of Canada’s prime minister threatening defamation action against Canada’s Leader of Her Majesty’s Loyal Opposition for his remarks about SNC-Lavalin. She bifurcates the matter neatly.

Why, she asks, did Conservative leader Andrew Scheer wait almost a week to make public use of the political bombshell of a sitting PM threatening to sue – i.e., attempting to silence – an Opposition leader?

At the very least, news of the March 31 threat should have immediately followed the expulsion from the Liberal caucus of former attorney general Jody Wilson-Raybould and former Treasury Board president Jane Philpott. Want to affirm in the public mind an image of Justin Trudeau as über silencer of all opposition? Try exposing his legal attempt to muzzle an Opposition leader immediately after the ouster of two key internal party critics. Works like a charm every time. So, why, given this explosive advantage, does Scheer now more resemble a bewildered Wile E. Coyote staring into the sputtering fuse of a stick of Acme dynamite?

Pellerin’s second “why” is even more compelling. Why on God’s green earth would the prime minister send such a threat? Either way it plays, he loses.

If he fails to follow through, Opposition critics will remind Canadians over and over again until Election Day in October that the allegations Andrew Scheer made must be true because the prime minister himself backed down from his legal vow to challenge them.

If, God forbid for the Liberal Party of Canada, he does follow through and the matter ends up in court, every jot and tittle of the SNC-Lavalin affair will be discoverable as evidence, and therefore subject to being made a matter of public record. Six months of SNC-Lavalin seeking a so-called deferred prosecution agreement to avoid trial on corruption charges will have ended publicly in front of a judge anyway. 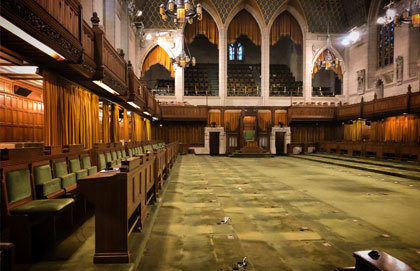 Why did Justin Trudeau threaten, why was Andrew Scheer slow to respond, and why, oh, why did Jody Wilson-Raybould have to act on what she knew?

All the internal strife, the resignation of the Clerk of the Privy Council, the resignation of the prime minister’s principal secretary, the loss of two cabinet stars, and what the PM himself has called a “civil war” within his caucus, will have been for nothing. SNC-Lavalin will be the show piece of a civil action that risks spilling every little detail all over the court room floor. Can you spell Oscar Wilde?

In popular mythology, of course, Wilde is remembered as the great Protestant Irish writer infamously jailed for being gay in Victorian England. He wasn’t. He was jailed because he launched a defamation action against the Marquess of Queensbury, who had called him a “somdomite (sic)” in writing. Evidence at trial led to Wilde not only losing the suit but being charged with having sex with teenaged boys. His crime and punishment were functions of his acts of pedophilia, exposed by his dirty bed sheets literally being brought into court.

The digression into legal-literary history serves to remind that those who have legal secrets are best advised to avoid libel litigation like the proverbial plague. It’s a saw that carves out a series of other “why” questions beyond the two raised in Brigitte Pellerin’s blog. One of them has been front and centre for me since this whole SNC-Lavalin fracas erupted with the Globe and Mail’s Feb. 7 front page scoop: Why is the Montreal engineering firm so seized with avoiding either a trial or having to enter a straightforward guilty plea?

Several lawyers that I’ve spoken with agree it’s a central mystery, one that likely has far more to do with the company being determined to keep certain private matters under the sheets, as it were, than with the flimsy invention about the need to protect jobs. The issue of companies convicted of bribery being banned for up to 10 years from receiving government contracts, they say, is something to be concerned about in the sentencing phase of a proceeding, not at trial. Indeed, the company could, I’m told, launch a Charter challenge against the 10-year prohibition as being excessive punishment. Alternatively, the Crown and defence could make a joint submission for a reduced sentence given efforts by SNC-Lavalin to clean up its act since the charges against it were laid.

But no. It persists in pursuing the option of deferred prosecution, which effectively allows it to admit guilt yet, as I understand it, keep all evidence out of the public record. Why? Doesn’t SNC-Lavalin want us to know the details of what its now-fired operatives were doing that brought it under criminal scrutiny in the first place? If so, why?

Which leads to an even deeper “why” arising. Why is the prime minister of Canada prepared to abide any such lack of public disclosure in a matter that he has acknowledged is of critical public interest? The ready-aye-ready answer, that he’s doing it to protect his own electoral skin and therefore putting the interests of the Liberal Party first, doesn’t pass muster. We can all read the polls. As Shannon Proudfoot reported in Maclean’s on Friday, since SNC-Lavalin blew up, the Liberals and the prime minister have been “bleeding support” all over.

Given that, it is a reasonable question to ask why Justin Trudeau is so attentively tuned to the interests of one Canadian engineering firm that he appears to be willing to sacrifice his own, and his party’s, political well-being? There is a myriad of possible answers to that question, some that cross into a kind of strange but admirable altruism. But it is unquestionably a question that needs to be answered sooner rather than later.

It leads inexorably to a final why (for today, anyway). It concerns not the prime minister directly but rather Jody Wilson-Raybould. In three months, she has gone from being a shining light of the Trudeau cabinet to an expelled MP who will not even be allowed to run for the Liberals in the next election.

Why would she risk such an outcome by going public in the measured, documented way she has unless she knew what she was saying was true and, far more importantly, essential to say? Why would she be prepared to burn the bridge she was standing on unless she was absolutely convinced there was a critically important matter of principle at stake? Why would she recklessly gamble with the perks and powers of an incredibly bright political future for herself and for the causes she supports?

To ask is to form a perfect triptych of “why” with the questions Brigitte Pellerin asks in her blog: Why did Justin Trudeau threaten, why was Andrew Scheer slow to respond, and why, oh, why did Jody Wilson-Raybould have to act on what she knew?