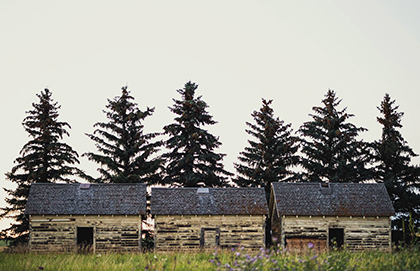 The blaring noise not unlike an air raid siren dragged me out of sleep at 3 a.m. in my tiny Ottawa apartment. Through blurry eyes, I saw how my phone had turned itself into a sort of warning station, its screen lit up. “What is going on?” my roommate mumbled in Spanish from where we had set up a temporary bed for her this summer. “It’s OK. Go to sleep,” I said, unsure of what exactly was going on. Sirens echoed from every corner of our thinly paneled heritage house.

Before slipping into an uneasy sleep, I breathed a prayer someone would locate the little girl. By 4:15 a.m., the alert had ended.

“I think I had a nightmare about that little girl,” my roommate whispered into her coffee the next morning. Silence stretched between us. “The kidnapping of a two-year-old is certainly nightmare material,” I said over the toast.

I smiled into my coffee. I cannot tell you the number of articles I have read, lectures I have received and conversations I have participated in regarding the “damage that technology is doing to our communities.” And while I am not here to debate the overall impact of technology and smartphone use – which undoubtedly has a dark side and has contributed to the rise of an age of distraction – I found myself celebrating the use of my cell phone as a tool for good.

I was rejoicing in something else that morning, too. In an age often marked by the siloing of conversation, social isolation and loneliness, I was celebrating the use of technology to remind us that we belong to one another.

A recent Angus Reid study produced in partnership with Cardus revealed the shocking prevalence of loneliness and social isolation in Canada. Sixty-two per cent of Canadians would like their friends and family to spend more time with them. Thirty-three per cent are not sure they could count on friends and family in the case of financial crisis and six in 10 women “sometimes or often wish they had someone to talk to but don’t.”

I have had numerous Canadians confirm the truth of those statistics. I often lead with these numbers when asked to share about our research when I am out in the community and proceed to watch for people’s reactions. Each time, reactions include the shaking of heads, sighs and the clucking of disapproval. Yet never do the listeners refute these facts. It seems that Canadian loneliness and social isolation is common knowledge, accepted fact. We have mourned but resigned ourselves to our fate.

I for one am not resigned to this fate. I refuse to enable this phenomenon to endure. Even just reciting these facts makes my blood boil. Give me 30 seconds of leeway and I am liable to end up ranting about belonging to one another, inviting someone to dinner and often have to be held back by those wiser than I from all but handing over my house key.

Loneliness should not be our default condition. We were not made for it. We were not meant to walk alone. Perhaps the Amber Alert offers us a way forward.

Yet, as someone of faith, I believe that there is a theological significance to that phrase. One that frames an Amber Alert as a call for each of us to wake up to the value and preciousness of every single human life. That the life of a tiny, vulnerable young girl in our province at risk is absolutely worth the sending of an Amber Alert to the cell phone of each and every resident in the region. In fact, by doing so, we awake to our collective responsibility to uphold justice and safety in our home communities. We are reminded that the safety of the vulnerable is of concern to all.

As a Christian, the image of an entire region being awoken and charged to go out and look for one little girl brings to mind the parable of the shepherd leaving his flock of 99 to go and look for the precious one that is missing. Too often do the lonely, isolated, vulnerable and in-danger go unnamed and even overlooked.

So bring on the Amber Alerts. Far above news notifications, social media updates and advertisements spit out by algorithms attempting to anticipate what the next thing to consume should be, the Amber Alert stands apart as a reminder that we are indeed each other’s business. While technology will not save us from our loneliness and social isolation, it must serve as an important cornerstone moving forward as we attempt to recover our sense of responsibility towards one another.