Two postcards from Canada's Switzerland, where "neutrality" now means the Québec government will employ its monopoly on the use of force to knock all hats off all heads almost equally.

A) Wisdom from friend and Convivium magazine contributor Alisha Ruiss:

Just asking for prayers for the province of Québec and an appeal to all of you for increased unity—in our family, friendships, faith. I always thought I would live to see some sort of religious persecution that was more blatant than the many ways I already experience (mockery, assumptions that religious people are stupid, clear disrespect towards aspects of my faith's symbols, teachings, condescension, etc . . .).

I guess I didn't think it would be quite so brazen. This is quite serious not only for what it is but because I think this issue will be used to try to push Québec separatism for all those who oppose it, and the thought of ma belle province becoming an isolated island of xenophobia in the name of protecting so called Québec values makes me sick at heart.

I am first of all a Christian, a Catholic, whose belief in God, even through struggles, I hold dear. I am second, a Canadian, a French Canadian who has chosen Québec as my home, who lives in relative peace with a diversity of people of different faiths and no faith at all. Even though I would love for others to come to share my faith, though I may be a challenging presence, I have no desire for their freedom to be violated, and that's precisely what this proposed charter is about: violating religious freedom of expression.

This proposed charter is wrong in so many ways I haven't time to count them all. As well as dealing a serious blow to the freedom of religious expression, it also puts forth the idea that a secular outlook is a neutral outlook, or that secularism necessitates controlling religious expression—something I know that many friends of mine who are non-believers vehemently oppose.

There is a sentiment that is expressed that we should relegate our faith to private worship: just conform and everything will be okay.

As was written in a recent letter in La Presse:

("So I extend my hand to you and ask you, my Muslim friends, that you join other immigrants, Italians, Chinese, Greeks, Vietnamese, Latin-Americans, who also practice their religion, but discretely at home, why is it easy for them and not for you?")


Well, yes, of course, how silly of us. I'll be sure to leave all of my deeply cherished beliefs in my closet where they won't bother anyone. Incredibly scary because of its subtlety—except for those who have lived through oppressive regimes, where they can smell it a mile away.

Thankfully, the backlash seems to be quite strong—let's hope strong enough so that no one will ever have to worry about whether or not it's ok for me to wear my Cross, or a religious t-shirt, or priests or nuns to wear their collars and habits, or members of any other faith or set of beliefs to wear something that expresses their beliefs.

B) A recent walkabout reflects my building sense of bewilderment:

So here I come from Villa Maria Metro in Montreal's Notre-Dame-de-Grâce neighbourhood, heading over to catch a bus on Côte-St.-Luc Road that will take me through a borough with one of the city's largest Jewish populations. 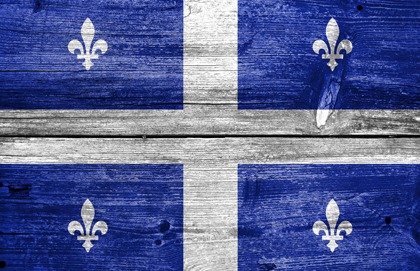 Turn your back to them
Buying Groceries in Egypt
After Meaning: Quebec's Religion Problems are Mere Symptoms

Name a race, ethnicity, language group, skin colour, hair texture, eye shape and you will almost certainly find a match among these streaming young Montrealers, Québecers, Canadians. And in their midst, walking, laughing, being school kids just like everyone else, are some Muslim students with beautifully coloured scarves modestly covering their hair.

I look around and I say to myself: Here I am, Lord, on a street honoring the Hellenist Evangelist, between one neighbourhood whose name reflects its French-Canadian Catholic history and another neighbourhood that Jews have long called home, walking among the multiplicity that is Canada's future, watching Muslim girls bear their identity with strong, quiet, simple pride.

I say two more things to myself:

And I wonder, in a kind of postscript, what the real Swiss would think of this particular understanding of neutrality?

Turn your back to them

And so, the two greatest heroes of most nationalist movements—the peasant and the poet—both share a deep and abiding sense that the modern state is not real Is the Québécois quest for sovereignty a properly modest aspiration fuelled by evident injustices of Canadian federalism or a spiritually disto...

The Muslim Brotherhood retaliated against Coptic churches and by marching through the streets of Cairo While international discourse tends to focus on the extreme players in this combat, there is a wide swath of moderates in Egypt, who want a modern state with tolerance for minorities ...

What seems, on the surface, to be simply fear of outsiders "diluting" French culture is the more complex response of those who have long ago emptied their lives of truly lived faith and now face others whose faith is the fulfillment of life itself ...