The sound of religious worship is as varied as the number of faith traditions around the world. A mournful chant, an ancient hymn, a barely audible mantra, and even the wail of an electric guitar will pierce the air in various houses of worship. But on a sunny Wednesday morning, the typical sounds of worship gave way to the whine of circular saws, rumbling forklifts, and hammers hitting nails. The audio landscape changed as more than two dozen leaders of faith communities and faith-based organizations responded to the call from Faith in Canada 150 to spend the day volunteering at a Habitat for Humanity Greater Toronto Area (GTA) construction site.

“We believe that faith is what’s happening today – that faith is lived through action,” Ene Underwood, CEO of Habitat for Humanity GTA, told the multi-faith assembly at the faith leaders’ build.

Her words came over lunch – halal, kosher, and vegetarian – while distinct faith communities mixed and mingled as they broke bread, taking a break from their construction.

“Just remember, Jesus was a carpenter,” Rabbi Baruch Frydman-Kohl remarked with a smile at one point in the morning as he picked up tools with Christians, Muslims, and representatives of other faiths. It wasn’t long before he, Bishop Vincent Nguyen, and Imam Hamid Slimi were grabbing a plank of plywood together and nailing it down as part of a second storey floor. Differing backgrounds and beliefs did not get in the way of a common act of worship and a common expression of faith by contributing to the construction of 50 homes for low-income families.

The significance of the day’s work wasn’t lost on Ray Pennings, co-founder and executive vice president of Cardus, the think tank behind Faith in Canada 150.

“The secular narrative, by and large, is that faith is what happens in churches, mosques, synagogues, or what happens in people’s private homes,” said Pennings. “The narrative that we want to counter with is … a lived faith has implications for society and for the public good. We want to give tangible expression to that. Faith communities don’t just serve their own members and those who walk in the doors. Faith actually produces a public good.”

In this case, the public good would be safe, decent, affordable homes at 140 Pinery Trail. But the actions of faith leaders also made real what in Habitat for Humanity parlance is known as the “theology of the hammer.” 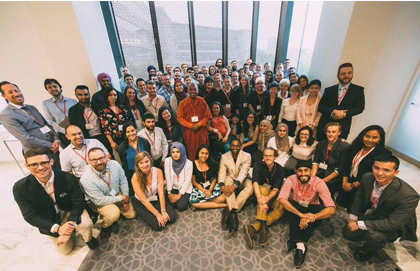 A Song of Ascents: A Report from the Faith in Canada 150 Millennial Summit
City of Sparks
Cardus Law: You, Me, Community
They gave resonance to a simple truth: This is Canada. Faith matters.

“Our political, philosophical, and theological differences exist, but we can find common ground using the hammer as an instrument of … God’s love and our common love and compassion for each other,” said Underwood, quoting Habitat founder Millard Fuller.

Indeed, the differences among the assembled faith leaders do exist, including deep disagreement on the nature of God, the identity of Jesus, sin, salvation, and myriad other issues. Noting that the day’s effort was not about “eradicating the differences between us,” Pennings pointed out some of the common ground among faiths, such as an appreciation for the sacred, not just the secular. But he also noted a common thread among faiths of appreciation for “arriving home.”

“Almost every faith tradition has a sense of purpose, of destiny – a place of arrival,” Pennings said. “In a very tangible way, the homes that are being built are places of arrival. Also, in a temporal way, for 50 families in our community who are facing challenges, this is going to provide an opportunity for them to come home with a different sense of meaning than they’re able to today.”

And just how do so many faith leaders get together to work on a common project for a day?

It wasn’t a spontaneous burst of cooperation. In fact, the day’s effort grew organically out of the Faith in Canada 150 project, which created a national network of faith leaders and faith-based organizations called the Faith Alliance.

“The seed sort of got sown, if you will, at one of those Faith Alliance meetings,” said Pennings.

It was at one of those meetings earlier in the year when several faith leaders broached the idea of cooperating at a Habitat build. And it wasn’t long before an event was organized and leaders were being recruited to take part.

“We brought more than 300 faith communities together as part of the Faith Alliance,” said Pennings. “So, we have used that network to raise awareness and support for this project.”

Faith leaders packed up their tools and gave back their hard hats at the end of the day. But they didn’t just help build homes. They gave resonance to a simple truth: This is Canada. Faith matters.