Convivium: The Armenian Church Diocese of Canada – in partnership with the Vancouver company Lights and Shadows Productions and the Government of Canada – has created a short documentary on religious diversity in Canada. Where did the inspiration for this project come from?

Levon Isakhanyan: The year 2018 His Holiness Karekin the Second, the Supreme Patriarch and Catholicos of All Armenians proclaimed the year of youth. The head of the Armenian Diocese of Canada, His Grace Bishop Abgar Hovakimyan, gave his blessings to the Armenian Parishes and the diocesan staff to focus on somehow promoting dialogue among younger people who are not only Armenians, but youth from other faith-based communities too.

We started thinking "What should we do to bring together these young, spiritual Canadians?"

The project, Celebrating Our Diversity Now, was born. The government supported our project and we got to work. There were many different components to the project – meetings, a website, and also this documentary. We wanted to bring together young people from different faith-based communities.

C: This documentary was filmed in Canada’s four largest cities: Vancouver, Calgary, Toronto, and Montreal. Can you talk about the continuity and difference you experienced between communities of faith located in these diverse pockets of Canada?

LI: These cities as you mention are very different. At the same time, they are all Canadian cities, so they share some base similarity. Collectively, they hold the largest concentrations of urban Canadians.

For this reason, we wanted to go to these four locations, and organize our meetings in collaboration with the local faith-based communities. We also have some presence in those cities. In each city, we were filming the documentary but also holding interfaith meetings. We typically divided the day into three parts: an interfaith meeting, interviews in the afternoon, and visiting places of worship in the evening.

As we were doing our interviews and visiting different places of worship, we wanted to somehow highlight the aspects of worship that were similar across traditions and those that are different among various communities. We discovered that most of the faith communities, almost all of them, deliver the same, or try to deliver the same message, at least as they are expressing it.

For example, we heard everyone saying that they were praying, not only for themselves, but also for all the human beings, for the well-being of all people.

I was reminded that if we were all the same, we wouldn't have this diversity at all. We are all different, but our difference makes us beautiful. When you put together all these different parts of the puzzle, of the mosaic, it gives us this wonderful mosaic of the Canadian society.

People tend to get lost, I would say, because we are in a constant rush, especially in the modern days.

C: Fear, generational differences, and religious illiteracy were also cited as key challenges facing young people of faith today. What steps are communities of faith across Canada taking to address these very real challenges and support the next generation of leaders of faith? 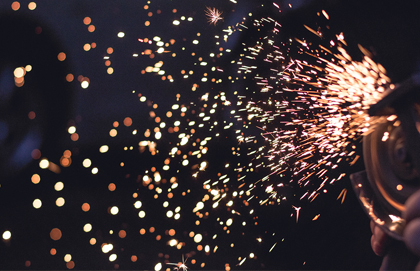 If you want to personify faith and challenge its eradication, you have to promote the light. You have to focus more on what is positive from the point of view of the soul. Father Paraskevopoulos, from the Greek Orthodox church, said that if anyone says that he wants to see God but hates other human beings, he is never going to see the God. You cannot have such an attitude.

It was interesting to see that both a Jewish rabbi and a Muslim imam, are talking about the importance of promoting religious literacy. Faith plays a very important role vis-à-vis the formation of the character, both for faithful people and in the process of those who are not of faith witnessing the formation of faithful people.

Sometimes you might not realize how in terms of its place but on the subconscious level, it plays a very important role because faith is a part of identity.

C: About halfway through this documentary, Imam Fayaz Tilly says, “We need to be more concerned with our character than with our reputation.” What role do you believe faith plays in the formation of character?

LI: I think this conversation is first and foremost about identification. Every person has some kind of identification, be it Catholic, Muslim etc. Even atheism is an identity. Identity is, in my opinion, a condition of human dignity.

C: Lorna Dueck shares within the documentary that 67 per cent of Canadians believe in God or a higher power. This surprised me, and I know I’m not alone. Why do you think that a narrative of secularism, rather than diverse religious pluralism, has emerged within the Canadian sphere?

LI: This did not surprise me. I think it is normal that the majority of people are believers. We have to understand that people believe in God and continue to believe. The question we should be asking is why is there more talk about secularism rather than diversity? Secularism is a very good thing. It is necessary in a country, or else we would have theocracies.

In countries like Canada, secularism allows many different identity groups to grow. We have to take this into consideration. In order to create sustainable conditions for our peaceful coexistence, we have to find a way where none of our identity dictates its rules over the behavior of other human beings.

If you cannot love something or someone that you don't know, you have to figure out how to know them.

I’m not advocating for the kind of secularism that is bland, but I do believe it is necessary for a diverse society to peacefully move forward and develop. It provides some preconditions for peaceful coexistence.

This goes back to your original conversation with me about religious literacy. Are people literate regarding what secularism is? Do they know the benefits are of religious pluralism? In this context, I would say the faith-based communities have an important role to play in promoting their own importance to the well being of multicultural societies.

C: “Loving each other? The first step is knowing each other,” says Dr. Adriana Bara. What steps can ordinary Canadians of faith take to begin to get to know their neighbours of differing faiths?

LI: If you cannot love something or someone that you don't know, you have to figure out how to know them.

To know someone, you have to open your heart to the positive aspects of who they are, to receive from them. At the end of the day, again and again, Father Paraskevopoulos said you have to see the beauty of creation in each and every individual. Then, we will see the Creator Himself.

If we know each other, we can collaborate together to bring more light into the world. This creates less space for darkness to remain. I find this to be a bit of an overwhelming question to consider if I’m honest.

C: Very Rev. Fr. Ammonius Guirguis asks, “How we learn from them and how they can learn from us?” Where do you think most Canadians learn about faith now? Is it in the news, on the internet? What resources can you point Canadians who want to learn more about their neighbours of different faith?

LI: I would say the vast majority of not only Canadians but also people the world over are learning from the news, from social media. Unfortunately, I feel as though there is mostly negative information being disseminated. You don't have many positive stories.

People seem mostly interested in something negative or news that would reduce the strength of belief in something that they held before. The message, of the Internet and the media, and the majority of the coverage is not positive, especially as it comes to religion.

We made this video to create a positive message. We have already had so many views and despite releasing it not too long ago, we have received messages from all over the world already. People are sharing this movie. I think if you create a space to share stories like this, you also create space and more ground for people to have positive interactions around this content.

C: “If we aren’t walking a path of courage or service, why would they?” asks Michael Bopp of the Bahai community of Calgary. What role can elders in communities of faith guide their younger counterparts into a future marked by increased faithfulness?

LI: Why do people go to church, to mosque, to synagogue? They go because they are looking for some kind of teaching. We want to be taught and we want to understand how the message we are being taught is being implemented.

Elders don’t just play an important role. They are fundamental to any community. I will speak in the context of the Armenian Church. We are only able to walk on this path of Armenian Christianity because of the Armenian Apostolic Church that went before us. For many centuries, we didn't have a State because our Armenian State was conquered and the Statehood was lost. We managed to maintain and to save our identity thanks to the Armenian Apostolic Church. Our church is the main national institution of our people.

We managed to be who we are because we were able to see the example of our clergymen, our leaders. In our history, both in the time of the formation of the Republic of Armenia and during the genocide, our monks were willing to die before they would allow our church to be conquered. They said, the church does not belong to those who are wanting to conquer it. Rather, it belongs to the Lord. The Lord made us, this people, to build it, so it belongs to us, too.