The transformation couldn’t be more dramatic. Each May, thousands of tulips in full bloom turn Ottawa’s parks and public gardens into bursts of vibrant colour, ranging from fiery reds and yellows to delicate pastels—all the more striking after the dreary greys and muddy browns of winter. The city’s annual Tulip Festival brings with it the eager anticipation of a debutante ball, with all of nature dressed in its finest apparel of greenery and flowers.

Even with COVID restrictions having forced many festival activities to go online for the second year in succession, the mere sight of the colourful blooms brings a renewed sense of hope to a pandemic-weary city.

The story of the festival has almost become the stuff of legend, in which central roles are played by a princess born in Ottawa to a future queen in exile and by a refugee boy from a Mardin, a little-known city in southeastern Turkey.

The festival has almost become the stuff of legend, in which central roles are played by a princess born in Ottawa to a future queen in exile and by a refugee boy from southeastern Turkey.

The story of Dutch Princess Margriet’s birth in Ottawa during the Second World War when the royal family found Canada a safe haven-- and of the liberation of Holland in 1945 by Canadian troops— is well known. In gratitude for Canada’s hospitality to the royals, and for military assistance during the war, the Dutch government has sent each year since 1945, thousands of tulip bulbs to Ottawa a special gift.

But it took the imagination and artistic flair of Malak Karsh, an Armenian refugee from Turkey— who later became a renowned photographer—for these iconic flowers to blossom into the centrepiece of one of Ottawa’s and Canada’s most popular spring festivals, placing the city on the world map as a former mayor Bob Chiarelli put it.

Malak—who used his first name for professional purposes to avoid confusion with his brother Yousuf Karsh, the famous portrait photographer—was fascinated by tulips and never tired of capturing their beauty through his camera lens.

In 1952, he proposed the idea of an annual tulip festival to the Ottawa Board of Trade. The following year Ottawa’s signature festival was launched, with Malak as the honorary president of the annual event until his death in 2001 at 86.

His photographs of Ottawa’s tulips framed against the peace tower and parliament buildings transformed the image of Ottawa from that of a dull lumber town to a sparkling jewel of a capital city.

The history of tulips, however, begins, not in Holland as is commonly assumed, but in Turkey, the birth country of Malak Karsh, where they grew wild and were cultivated for millennia before they were introduced to European gardens. In the 16th century, they were brought to Holland, where they became wildly popular. Today, they are cultivated in huge numbers in Holland from where they are exported around the world, giving rise to the idea that the flower originated there.

(Malak’s) photographs of Ottawa’s tulips framed against the peace tower and parliament buildings transformed the image of Ottawa from that of a dull lumber town to a sparkling jewel of a capital city.

“Tulips are a highly popular motif in Turkish art and are used to decorate everything from plates and tiles to fabrics,” said Mine Erbek in an interview with Convivium. Erbek is a retired art teacher, and costume designer with the Turkish State Opera and Ballet. She joyfully recalls the 2002 edition of the Tulip Festival when she travelled from her home in Ankara to Ottawa and designed a floral ball gown for the fashion show at the Turkish pavilion. 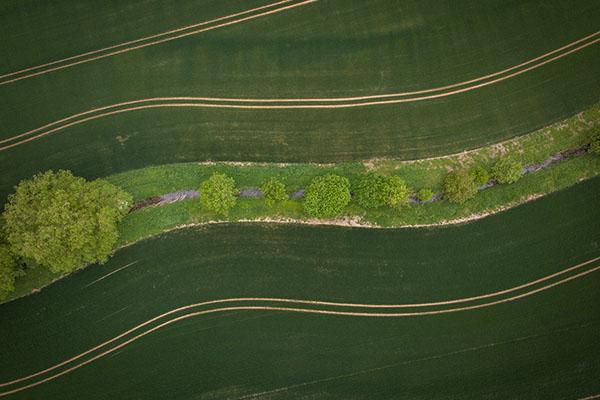 Apart from tulips and the talents of refugees like the Karsh brothers, the region of south-eastern Turkey where they were born has given many other treasures to the world, including an array of ancient Christian churches and monasteries of stunning architectural beauty.

Known as Tur Abdin (Mountain of the Servants of God) it is a limestone plateau bordering Syria and Iraq. Part of the Middle Eastern cradle of Christianity, it once had a majority population of Assyrian/Chaldean/Syriac and Armenian Christians who had lived there for millennia and practiced their faith since the very dawn of the Christian era.

Today, because of waves of persecution including the infamous genocide of 1915 (which drove the Karsh family into exile), their numbers have dwindled to a mere 3000. Whole villages have been emptied of their Christian inhabitants and many of the places of worship are in a sad state of disrepair.

Aramaic/Syriac, a sibling dialect of the Galilean Aramaic that was the mother tongue of Jesus, is still spoken by these remaining Christians and others from the region who have emigrated to other countries.

But now there are signs of hope that this historical heritage—once thought to be in danger of being neglected and erased by hostile governments— will be preserved with the care it deserves, says Nuri Kino, a Syriac Christian journalist and filmmaker based in Sweden.

A native of the Tur Abdin region himself, with a family history similar to that of Malak Karsh, he has coordinated international film festivals in Mardin, and is intimately familiar with the area.

“Eight of the monasteries have been placed on a tentative list for consideration as UNESCO’s world heritage sites, and I’m really happy about that,” he told Convivium. “Also, for the first time, the Turkish media is using the name Tur Abdin, the name by which the region is known to Syriac Christians. This is a very positive sign, because Syriac, our native language was suppressed for so long.”

“It would be wonderful if UNESCO made Syriac part of the world’s intangible heritage,” Kino said.

The cultural heritage of the Tur Abdin area will soon be captured in a documentary film.

The brainchild of Syriac Christian lawyer Ilhan Aydin whose family emigrated to Sweden from the village of Hah in Tur Abdin, the documentary, “My Heritage” will showcase the region’s rich cultural treasures and history.

“The film will be about Tur Abdin’s distinctive culture, prehistory and its Christian heritage,” Aydin told Convivium in an e-mail.

Working with Turkish filmmaker Ridvan Baskurt, Aydin said they plan to release “My Heritage” in the spring of 2022.

“The idea is to show what a hidden pearl Tur Abdin is,” he added.  “Our current plan is to translate it into English, German and Swedish.”

From tulips and artistic talent to an ancient language and millennia-old monasteries steeped in beauty, Turkey has given some priceless gifts to Canada and the world.

Photo by Tienko Dima at Unsplash.com