“And all the lousy little poets coming ‘round/tryin’ to sound like Charlie Manson/see the white man dancin’….”
Leonard Cohen The Future

Montreal’s Museum of Fine Arts is a major institution in Canada’s only real city, which is why its summer Revolution exhibit is such a serious let down.

Devotees of the MMFA expect far better than Revolution’s intellectually lazy merchandising of 1960s mythology, especially after the sumptuous feast that was the Marc Chagall extravaganza in the spring, and last winter’s provocative glory of Robert Mapplethorpe’s photographs.

Based around the eponymous Beatles song, Revolution purports to be a fresh exploration and celebration of “the decade that changed everything.” It encompasses the roughly five-year span when the first wave of Baby Boomers left home and began behaving like cohabiting rabbits with Benzedrine in their water bottles.

It would be unfair and untrue to say the era was a complete disaster. It was, like much of the thought and many of the sentences of the drug-addled self-described “freaks” of the time, an incomplete disaster. The best minds of the generation shared a common addiction to being unable to finish much of anything more extensive than a three-minute rock song, and the requisite side order of drugs.

In fairness, good things did come of the 1960s. They ended, for starters. That’s a very good thing. Let’s see…what else? Hmph.

Too harsh? Maybe. Admittedly, great music, however inadvertently or accidentally, was made. Major steps were also taken to break down truly evil social barriers around race, and related repulsive restrictions based on class and sex. There was a kind of necessary personal liberation but, alas, it became indistinguishable, in what now seems like mere minutes, from pathological narcissism.

The notable invisibility of the period’s pathology is precisely what is so disappointing about the MMFA show. It’s why it should matter even to those unfortunate Canadians unable to live in Montreal year round, or at least visit it with spirit rejuvenating regularity. Yet again, one of the country’s major mediating institutions has given a pass to the destructive folly and violent fraudulence of the 1960s rather than scraping away the Day-Glo paint and exposing the dark ugliness masked by all those drug-addled smiles. In so doing, it has, however unwittingly, refused art’s great commission of using truth to hold evil up to the light.

It’s why it should matter even to those unfortunate Canadians unable to live in Montreal year round, or at least visit it with spirit rejuvenating regularity.

Where, as I asked friends with whom I attended the exhibit, was Charlie Manson, for example? His visage was nowhere visible in the cornucopia of images stretching from Bob Dylan’s Highway 61 Revisited all the way to Woodstock. Indeed, by the time we got to Woodstock in the exhibition space, the impression conveyed was that for a short, sweet time in the history of humanity, happiness and light had reigned all year round while beautiful music played ever do loudly. Nirvana, and not the suicidal ‘90s grunge band, had apparently touched down.

But Charlie Manson was, in all his psychopathological charisma, every bit as much the epitome of the 1960s as the cherubic faced Paul McCartney, the drunken doomed diva, Janis Joplin, or the cat-strangled harmonics of Crosby, Stills, Nash and Young. He, too, wanted a “revolution” based on all out race war, and fittingly took the thematic from it from the title of another Beatles song, Helter Skelter. And Charlie, the octogenarian with the swastika carved in his forehead, has has actually outlived most of his fellow ‘60s dwellers. He’s not just a frightful flashback from a time that overflowed with awful memories. He’s the monster in maximum security that just won’t die.

So what do we do? How does one of Canada’s finest art institutions in its only real city respond? It Photoshops him out of history, then drags and drops a kooky cartoon cast of happy clappy hippy love bugs into the white space that Charlie Manson properly occupied. In polite company, this is called Soviet-inspired propaganda technique. The more plainspoken term is historical lying. 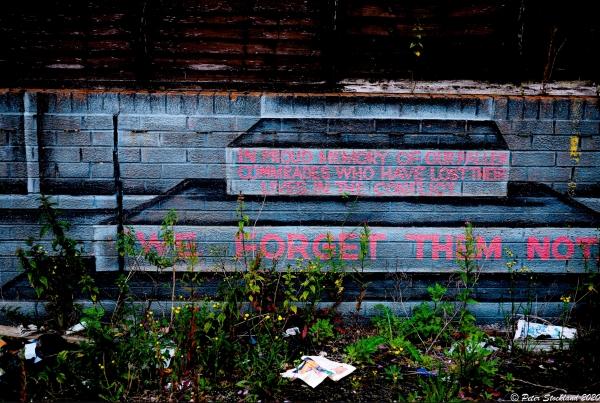 Sharing Memory Matters
Setting Down Roots...or Not
The Cultural Mousetrap of Cats

I cite Manson’s missing murderousness mug merely an example. Of course, there are a myriad of others who, while not as overtly bloodthirsty as he, destroyed hundreds of thousands of lives through everything from the “revolutionary” advocacy of recreational drug use to the tearing down of essential social structures such as the family, the church, the possibility of faith itself. Where are their faces on the museum wall? Where is the calling them to historical account?

The paradox of their absence is that the very song that provides the MMFA exhibit its motif was precisely about calling to account the malefactors, miscreants and outright murderers who painted black the bright dream with which the decade began. In his Revolution, the perpetually perspicacious John Lennon sings:

“You say you want a revolution

We all want to change the world

You tell me that it’s evolution

We all want to change the world.

But when you talk about destruction

Don’t you know that you can count me out….

(And) if you go carrying pictures of Chairman Mao

You ain’t gonna make it with anyone anyhow….”

Climbing free of the wreckage of the 1960s, the Who’s brilliant Pete Townsend wrote a song in 1971 that should, in truth, be the anthem of the benighted age:

I tip my hat to the new constitution
Take a bow for the new revolution
Smile and grin at the change all around
Pick up my guitar and play
Just like yesterday
Then I'll get on my knees and pray
We don't get fooled again….

Don’t get fooled again! Now there is a future-oriented theme around which some very fine museum of fine arts somewhere – perhaps even in Canada’s only real city - might one day build a truly uplifting exhibition.

The Cultural Mousetrap of Cats

The less-than-purrfect Cats movie presents an underlying problem with the way in which our entertainment industry claws at art and replaces it with something in-fur-ior.