In a recently re-opened Ottawa restaurant this week, a member of our party of five was forbidden from using a chair.

He wasn’t sitting in it standing on his head showing off some exotic yoga pose or, more pedestrianly, engaged in man-spreading to a degree that discomfited other diners.

In fact, he was told he would have surrender his seat and squish into a booth where four of us were already crammed. Why? Why, to comply with COVID 19 public health regulations, of course.

“But isn’t the greater risk having us all so crowded together?” asked one of the litigation lawyers in the group.

“You’re all one group so you’re okay. The tables have to be six feet apart,” the hostess answered with a shrug of I-don’t-make-the-rules.

Given that dining chairs measure about 16 inches from front to back, our friend would be only 4.667 feet from the nearest table, and therefore a potential menace to spread the worst pandemic virus in a century. Never mind that he would be facing away from the table, which was empty. Ridiculous, ludicrous, crazy, we all expounded, until one of our number held up a hand and said: “Let’s not get started or we’ll be here all day.”

Wise words. And yet, alas and alack, here is exactly where we are. I myself have accumulated anecdotes that could fill out a six-foot list of absurdities gusting to lunacies in the application of COVID prohibitions. Let me tell you about the receptionist behind a two-inch plate glass barrier who insisted I keep my mask on even though she couldn’t understand what I was saying. Or no. Let me not, as the wise man warned, go down that road. We’ve all been there. We all know.

So, knowing, what can we do? What do we do? Mostly we roll with the absurdities a) because there seems little alternative and b) because absurdity is such a commonplace of our waking hours that Samuel Beckett’s absurdist plays seem like blinding statements of the obvious by contrast.

I myself have accumulated anecdotes that could fill out a six-foot list of absurdities gusting to lunacies in the application of COVID prohibitions. 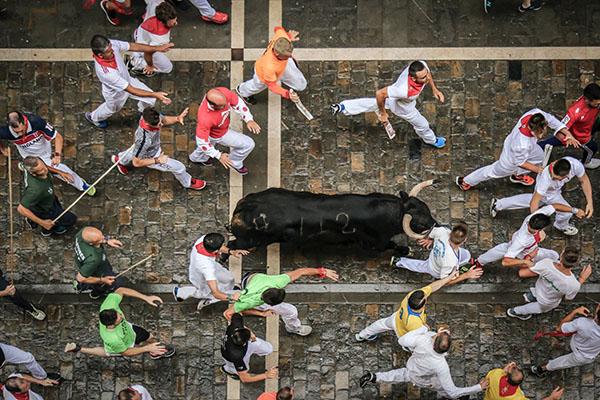 This being where we are, it’s still a vital question as to whether it’s where we should be, i.e., is it a good place for us to be? The great Catholic writer Flannery O’Connor pinpointed why it’s such a crucial (cruciform?) question. Southern writers, O’Connor wrote in the essay “Some Aspects of the Grotesque in Southern Fiction” have a penchant for writing about freaks because they are still able to recognize one.

Such recognition, of course, requires the corollary capacity to recognize, remember, and recall us back to the ordered good that makes the freakish stand out. As O’Connor walks us toward seeing in her story “A Good Man is Hard to Find,” the point is not to kick against the misfit per se but to regard the image of the outlier to remind us how far we’ve fallen from that which the ordered good demands we do.

In purely political terms, the very least we must do is call legal, regulation, and freedom-corroding absurdities by name. Failing to do – collectively agreeing to refrain from doing so –risks begetting the tyranny of hourly lies that characterized certain evil empires of the 20th century.

We are nowhere near such a tyranny (though I can already hear one razor sharp polemicist I know vehemently disagreeing). Yet where we are now stands O’Connor’s wisdom on its head and contorts it into a most unbecoming pose. Our adaptation to meekly accepting ever abounding rule-by-absurdity is creating a disorder in which those who challenge it are the ones scorned – even silenced – as freaks, misfits and menaces.

Our adaptation to meekly accepting ever abounding rule-by-absurdity is creating a disorder in which those who challenge it are the ones scorned as freaks, misfits, and menaces.

I regularly hear, for example, first-hand stories from those who question the current hard sell vaccination campaign. They recount being bluntly asked the most intrusive queries about their personal health and treated as social pariahs if they don’t respond according to vaccine orthodoxy.

To be clear, I am double-vaxxed, as we now say. I conclude the balance of probabilities – 940 million doubly dosed globally with moderate to minuscule repercussions – makes vaccination a prudent choice. In Thursday’s Wall Street Journal, public health researcher Dr. Leslie Bienen and University of California infectious disease specialist Dr. Monica Gandhi underscored that. Detailing the statistical global benefits of vaccination even in the face of the much-hyped Delta variant, they cite a Public Health England study showing the average unvaccinated person is “25 times as likely to be hospitalized with COVID as the average vaccinated one.”

I consider such a number, factor in my age-related risk, and see vaccination as a slam dunk calculation for me. I consider it equally presumptuous beyond imagining to insist others make the same risk assessment and come to my conclusion, especially under the present inordinate social, media, and political pressure.

A recent op-ed in the Globe and Mail, for example, sought with the most arm-twisting, soothing paternalism possible to teach readers how to override “conspiracy theorists” and help expand vaccination. Conspiracy theorists, it turned out, apparently comprise the entire 25 per cent of the U.S. population identified as vaccine-hesitant.

To stress, I myself do not see the need for vaccine hesitancy. To doubly stress, I am not arguing against vaccination. I’m suggesting we ask ourselves about the COVID-induced habit of denigrating, often to the point of absurdity, those who question its appropriateness for themselves. In a world gone otherwise absurd, I do not see the good in scorning as “conspiracy theorists” or in equally derogatory language those who raise such questions.

I know from personal experience that many who are chary of vaccines are superbly intelligent people whose research abilities far outstrip my petty journalistic skills. Far from being part of the gape-mouthed crowd that, as the op-ed put it, believes Bill Gates wants to implant chips in their brains, they are sterling critical thinkers who unreservedly reserve the human prerogative to question, to challenge, to voice non-compliance with what infringes their physical, emotional and spiritual integrity.

When the pandemic first broke, my instinctive concern was the risk our response posed to large liberties. Here and now, I see the threat coming much more incrementally: not just in the absurdities of where and how and on which chair we may sit, but in the limiting of genuine concerns on which we’re “allowed” to take a stand.

Photo by Dan Gold on Unsplash.com

Sandra B. Julian warns a basic human right is being trampled in the COVID-fed panic to digitize and QR code where we can go and what we can do based on whether we’ve had the jab.