This piece ran originally in the Catholic Register.

On Palm Sunday, at Resurrection of Our Lord church, we were read a letter from Montreal Archbishop Christian Lépine confirming that our parish will be formally joined with a Polish congregation that has shared our building since 2006.

For 13 years, there’s been accommodation arranged between Resurrection and St. Wojciech and St. Maksymilian Kolbe. Events last year, including the retirement of our Father Jack Kennedy as parochial administrator, made it evident our little English-speaking parish in Lachine faced change. After 74 years of existence, to be blunt, the future looked little better than bleak.

But ever since a bilingual Polish-English Mass was held last August, creative work at a variety of levels from our wardens and administrations to Montreal’s episcopal vicars slowly, prudently, painstakingly, crafted “bonds of fellowship and fraternity,” in Archbishop Lépine’s words.

A sounding of both parishes resulted in a show of 80 per cent support for the merger of the communities, which will almost certainly be renamed for St. John Paul II. (Astonishingly, there is not a Catholic church in the Montreal archdiocese named for the great Polish pope.) 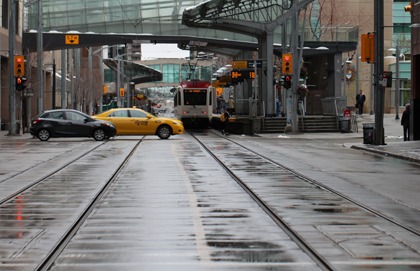 Eros and Civility
Building Beyond Bill 21
Faith Creates a Neighborhood

The irony, of course, is our good news is not really much in the way of news at all for many Christians, especially in Quebec, particularly in anglophone Quebec. Congregations merging, closing, or selling off is a matter of well-worn routine. It’s a function of demographics. It’s a function of the falling away of the Faith. It’s a function of the many stumbling blocks Pope Emeritus Benedict XVI named in his recent 6000-word letter on the sexual abuse crisis in the Church.

You could take a glass half empty view and see the whole circumstance, both for our local parish and the universal Church herself, as merely signaling a lingering, bitter end temporarily forestalled. Fortunately, faithful Christians don’t deal in glasses half-empty or half-full. The significant vessel for us is the chalice of Our Lord, albeit a cup even He asked to have passed if it be His Father’s will, knowing what His Father’s will was, knowing He would have to make the sacrifice for all of us.

His sacrifice, of course, what Palm Sunday points us to, what we will mourn on Good Friday, and celebrate in great joy on Easter Sunday. Within that celebration, within that joy, is the reaffirmation of our faith that the Church will continue in the promise that even the gates of Hell will not prevail against Her.

It’s a promise beset by what has sometimes seemed diabolical menace as the clergy sex abuse scandal spiraled to unimaginable depths of degradation. Yet in the face of that threat comes the enormous comfort of Benedict’s letter. It does not flinch from the damage done but, on the contrary, courageously names the authentic source of the problem, and wisely marks a path forward to renew the Church in this terrible time in Her life.

Naturally, media coverage has been superficial gusting to foolish, qualifying it as Benedict “blaming the 1960s” for the proliferation of sexually incontinent clerics. In fact, his critical point is that this is not the outcome of a unique historical moment. It is what happens when faith becomes subordinate to relativism and what used to be called situational ethics. Against that ethos, Benedict insists there are right and wrong answers, everywhere and for all time.

The sex scandal in the Church is a scandal of subordinating faith to flesh, he reminds us. It is the refusal to sacrifice as the Cross demands. It occurs when the individual, and not Christ, is placed at the centre of the Church. He asks us to consider, too, how such individualism manifests itself in our failing, or refusing, to recognize and live out what the Eucharist – what Easter itself – means.

This Easter, in our little Resurrection parish, we will join with the universal Church in that timeless Christian moment of Resurrection, though we will do so in a new way for us, joining in a bilingual combined Mass with our Polish fellow Catholics.

Crises will continue to swirl around us. But together, all of us as Christians will be renewed as one holy, catholic and apostolic Easter people again.

This column is adapted from a version that appeared first in the Catholic Register.