The panel convened the morning after the semi-annual Munk Debate at which 45 per cent of the audience agreed capitalism has failed and needs to be replaced. Originally, the Cardus discussion was designed to extend the Munk debate, but host Paikin and the three panelists decided on a more compelling topic: the political polarization that is splintering American and Canadian life.

What followed was a galvanizing display of cerebral improv, which we’ll present (slightly edited for brevity) to Convivium readers this week.

Steve Paikin: David, if Arthur’s right that perfect love drives out fear, who is the perfect love candidate for the Democrats? Who is the antidote to Trump?

David Brooks: As Arthur was talking, I just realized, I'm actually married to one of the three of us, or one of you two, and it's not the person with my last name.

David Brooks: I just made a table of priests over there nervous. There's an interesting contrast in the Democratic field on those who talk about fighting and those who don't. So we have this polarization, this division on the basis of ideology where we assume that (Bernie) Sanders and (Elizabeth) Warren are on the left and most other people are on the middle. But we also have a fighting versus non-fighting. And it's interesting to me, the person who spoke most about fighting was Kamala Harris, who's now out of the race. And the other person who spoke most about fighting was Warren, who is sinking right now. And as far as I know, Pete Buttigieg has never used the word fight in this campaign, and he is surging.

I don't totally agree with Arthur’s theory on the economic determinism of what we're going through. I halfway believe in it. The fact we're becoming a no majority country I think is a pretty significant here. And I think exhaustion is now becoming a more powerful driver than hatred. I met Pete Buttigieg about three weeks before he announced (his presidential bid). I happened to be sitting next to him at a dinner. And when he announced I thought, "Wait, I remember that guy. He was mayor of some small town in Indiana, and he's 37 years old." Yet he's done very well. Because of my job, I’ve had the chance to interview all the presidents, except for the current one, dozens and dozens of times.

I think exhaustion is now becoming a more powerful driver than hatred. 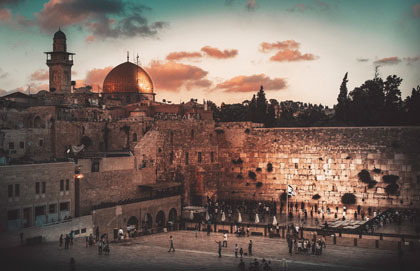 When I leave all those interviews, I think, "That's impossible. That job is impossible,"  If you’re the President of the United States, you wake up, you go to the national security brief, and then you're greeting the women's championship volleyball team from the University of Washington. Then you've got domestic policy and then you've got Israel, and then you've got something else. It's impossible. And yet having spent time with Buttigieg, I think, "It’s plausible. He could do the job as well as anybody." He is a character of “let's just relax and talk to each other and be normal.” When I covered the end of the Soviet Union, and the end of apartheid, normal was a gigantic word. “Let's just be normal.” There's a hunger for that kind of normalcy, which Buttigieg sort of fulfills.

Steve Paikin: Let me do a quick follow up with you, because you mentioned Israel in the midst of all that, and I don't want to sound like I'm picking on the evangelical community with the previous question to Arthur. So, let me pick on the Jewish community as well. The Jewish community is in the tank for Trump because he's moved the embassy to Jerusalem, and therefore he can do no wrong. Does that make any sense to you?

David Brooks: Jewish voters in the U.S. are pretty progressive and they're pretty Democratic. It'd be tough to live in New York. But the Orthodox community… he has been supportive of (them). My son served in the Israeli army. I've very complicated views about all the issues there. My attitude towards some of the evangelical voters toward Israel is like, "I'm really glad you support Israel. Maybe a little less." It's always like, "Move to Damascus. You guys should take over Damascus." And it's like, "No, I don't think so." But as Arthur was saying, as Anne was saying, when evangelical, this is one of Anne's sayings, when evangelical becomes a noun and not an adjective, it turns into a problem. It should be a way of practicing the faith, not a tribe you're a member of. Instead, it's become like, "We all hate the same enemies," and, "We all hate the Muslims." And if that's your motivation, you've got a problem. When my son left the Israeli army, he was a sniper in Gaza in the West Bank, he left with a very complicated view of the situation there.

And you should go into that place with a complex view. I've just written a piece I'm proud of for Comment on the Jewish view of Jesus. I don't know how many people here practice faith or how many people have not been to Israel. But if you go to Israel, the thing you get impressed with is it is a literal spiritual and metaphorical battleground, and it has been for 2,500 years. So you see the complexity of all that and you see what any Arab, or any Jew, or what Jesus, walked into: a maelstrom of conflict. And to be him in that context was a radical act of difference. But you become aware of the complexity of that view.

Many years ago there was a horrible mass murder at the grave of Abraham in Hebron. It was by a Jew named Baruch Goldstein who killed Muslims. I was there the week before. And the Christians, Jews, and Muslims had joint protection of this site, a Holy site for all three religions. And the Jews were allowed to sweep, the Christians were allowed to mop, and the ... I forget what the Arabs did, maybe they cleaned the windows, but the sense was that mopping was more ownership than sweeping, and a little more than-

David Brooks: I remember it was like a successful way to deal with our differences, but that takes a level of awareness of each other that is rare. If you operate in that world successfully, that's what you have to learn to do.

Anne Snyder: Something has been coming to mind in this whole discussion. A number of weeks ago, I saw a film that I recommend to all of you. It's called A Hidden Life and it's directed by a film director named Terrence Malick, who some of you may know is incredible. He's rather avant-garde, famous for a number of films, one of which was Tree of Life. And A Hidden Life is about actually a man who is not that well known, at least in my world, but I think has since been canonized by the Catholic church. A Catholic man who was with his family in rural Austria at the time when Austria had been taken over by Germany.

It's really the story of very hidden resistance. He winds up not joining Hitler's army, but being imprisoned for it. And no one knew about this and it's just searing, for anyone of Christian faith. It's probably the most cruciform film I've ever seen. But there's a line in it towards the end when the protagonist, the hero, is in the worst stage of his prison sentence and he's alone in his cell. The whole film is about tribalism and sort of the fury that sweeps up this seemingly innocent agrarian community as they are hearing words about who is superior, and about defending your community. This man who's made these choices to not join Hitler's army is being abandoned, including by the local Catholic priest for putting the community in danger and putting his family in danger.

So he's racked by all these moral choices he's making, which we would now in retrospect obviously see as very black and white. But, in the moment were very, fuzzy and the punishments were fatal. He's in his prison cell, looking at the light streaming in, and he's writing a letter to his wife. He says, “What I've learned is when you give up the right to survive, a new light floods in.”

I just thought it was a beautiful line that's very apropos to our moment of tribalism right now where there is this instinct I think at the root of tribe as some self-protection. It's trying to figure out what allows you, what love is great enough, whether vertical or horizontal, to allow you to get rid of that. It’s an ultimate individual surrender, but I sometimes think that's the only thing that will allow us to get past our instinct to withdraw and protect our own, sometimes in very ugly ways.

As Ottawa heads into one of the last Pride weekends of the summer in Canada, Convivium publisher Peter Stockland interviews Daniel Jonas, an Israeli LGBT activist trying to balance contemporary interpretations of human rights and identity with his devout commitment to the timeless truths of Orthodox Judaism.

How did we get into the tunnel, and can anything light our way out?

Riding Out The Polarization Express

The Startup Your Life Project