The panel convened the morning after the semi-annual Munk Debate at which 45 per cent of the audience agreed capitalism has failed and needs to be replaced. Originally, the Cardus discussion was designed to extend the Munk debate, but host Paikin and the three panelists decided on a more compelling topic: the political polarization that is splintering American and Canadian life.

What followed was a galvanizing display of cerebral improv, which we’ll present (slightly edited for brevity) to Convivium readers this week.

Today: The Startup Your Life Project

Steve Paikin: I'm curious about the fellow you described who lost his job and became a staunch Trump supporter. Three years later, how do you think he feels about his vote for Donald Trump? Do you think his life's any better as a result of that vote?

Steve Paikin: So why does he still feel good about it?

David Brooks: I spent a lot of time with Trump voters and they love him more now than before, because he's taking the fight to the people that they think look down on them. I mean, resentment is super powerful. They just wanted to throw him into the system and change it. And they see him owning the liberals. So their support for him is stronger. All the Republicans know they're less popular in their state than Donald Trump is. A lot of it is status related.

I'm a moderate. I don't like Trump, but I'm not a progressive. I get attacked from both sides. The attack from the right, from the Trump side, is from an idea of perceived inferiority: "You think you're better than me, I hate you." From the progressive side, it's from a perception of assumed superiority. It's ridicule and scorn. It's very interesting to be in my position to have these two different flavors of attack.

Part of it is spiritual. We all spent a lot of our time thinking about spiritual life, and we've become spiritually denuded in the country. There's something happening, part of it I don't understand. Why has the teenage suicide rate in the U.S. gone up 70 per cent in the past six years? Why has the college depression rate gone up, doubled in the same period?

Somebody did a study at the University of Michigan on empathy. I'm not sure I believe in studies on empathy, but according to the studies, it's down 40 per cent. There's a guy who does a study on creativity over the last 30 years. Suddenly, creativity rates among college students have collapsed. I don't understand what's in the water, but something is in the water, and it's created a feeling of emotional panic, a sense of, "I need to attack in order to make myself whole." And we're just living in the middle of that. I've created this program at The Aspen Institute called “Weave: The Social Fabric Project,” which is an attempt to help people get better at relationships, and to help people get better at building community.

Why has the teenage suicide rate in the U.S. gone up 70 per cent in the past six years? Why has the college depression rate gone up, doubled in the same period?

I think it's that elemental essence of, "How do I get to know you? How do I see you? How do you see me? How do I make myself available to be seen?" And I think it's at that fundamental spiritual and emotional level that our problems reside. AI don't ever make this case in public, but some people do, and I'm not sure I agree with it, but it's like, you lose the faith element of your society, you're fragile. I think it's that deep whatever it is we're dealing with. 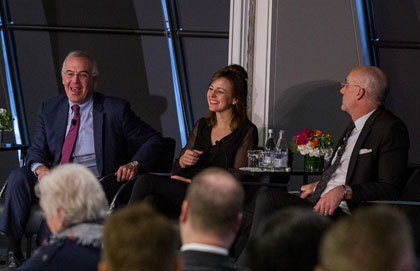 Steve Paikin: It’s not exactly as if there's a lack of religiosity in American politics these days though. When Jeb Bush came up to Toronto to give a speech, many years ago, before he gave the speech and before we dove into lunch, he sat around one of these tables and he leaned over to me and he said, "Are we not going to say grace before we have our meal?" I said, "Well, we don't really do that in Canada." He just shook his head and could not believe it. There's tons of spirituality and religiosity in American public life, and yet something's missing. What do you see missing?

Anne Snyder: I’m getting to know Canada since stewarding in Comment Magazine, which I'm loving, but coming up here is at once always so refreshing. But it is more secular. I grew up in New England, in a very secular part of the U.S., but I'm struck by how sort of civic religion remains a part of our forms, our ceremonies. I think right now there's a couple of things going on. There's a lot of hand wringing in the U.S. around the seeming sort of moral incomprehensibility of evangelicals, particularly white evangelical support for Trump. The same people who would have been aghast at, say, Bill Clinton's behavior are being asked "How can these folks support a man (Trump) who's had all these marriages?"

What you see is religion is an end, not a means. It's become an identity. It's become wrapped up in sort of a tribal sense of belonging that is often very fear based. I would call that sort of a spiritual impoverishment of what religion is actually meant to offer you.

We're talking about tribalism. There's something like so primordial in it. The Sebastian Junger book Tribe brings out the ways in which there's something natural and human about membership, about wanting to belong, about not fearing suffering so much. We fear not being needed. There's a lot of that right now, particularly for young people, and it's hitting men worse than it's hitting women.

In that desire to somehow feel needed, if the institutions are no longer there to grab your sense of purpose and activate it, to get you animated to care about a context beyond yourself that's tangible, to let you see the contribution of your role, then I think you revert to these tribal tendencies that get very hot and furious. It's almost a religious or spiritual impulse, but manifesting it in what I would call a very pagan way.

Arthur Brooks: Donald Trump is a walking middle finger. You have to understand what happens when you have a fear based politics in the wake of a horrible financial crisis that disproportionately affected the second quintile in the income distribution. The financial crisis did not affect people at the very bottom of the income distribution of the United States because they were not earning income to begin with. It was the second quintile, the working poor and the working lower middle class that were ravaged by the financial crisis. And there was a belief, and it was a correct belief by the way, that people in Washington and on the coast didn't care about them. And finally, somebody came along who said, "I'm going to fight for you."

My own family, the family I come from, is pretty progressive. But one of my children lives a Catholic religious vocation and is very anti-Trump. The other is a farmer, didn't go to college, and he's joining the U.S. Marine Corps and he'll say to me, he says, "Dad, you know why we love Trump I'll say, "No, son. Tell me. And he says, "Because he fights for people like me." And I say, "You mean affluent kids from Bethesda?"

But that's not his point. The point that David and Anne are getting at, I think quite correctly, is that when you have a culture, when you have a political culture that's motivated by fear, people act in funny ways. The real question is how do you neutralize a culture of fear? Now, Trump is a bully. People actually don't like bullies. There's a lot of literature on bullies, a little social psych literature on bullies. Even people who, if it's your bully, you still don't like them. People will use bullies. Bullies believe that they're loved. They're not loved. They're despised. The problem is that we have to get into an equilibrium where people will reject their own bully. We're not there yet.

In the 15 years after a financial crisis, which happens two times a century in most developed economies, you have 15 years of fear-based politics. I have data on 800 elections over 120 years in 20 advanced economies, including the United States and Canada, that shows that on average in the 10th year after a financial crisis, you have a 30 per cent bump in the voter share for populist-based parties and politicians. It's Donald Trump and Bernie Sanders by the numbers. There's nothing mysterious about this because we're in a fear-based cycle where we feel that the rich or immigrants, or wily foreigners, or whatever, are going to take my stuff.

There's only one thing that drives out any kind of fear. Perfect love drives out fear. You actually need to be quite cognizant of the real problem, and David touched on it. He said there's this malaise among young people. Did you know in the United States that people in their 20s today are a third less likely to be in love than people were when I was that age? Is there anything that brings you more misery than a lack of romantic love? It's the life in life. God's gift to us, is love. It's the nuclear fuel rods of happiness. So, David's project, Weave, you have to check it out at The Aspen Institute. It's very important because what it's trying to do is to find institutions that will create the connective tissue between humans and create the ecosystem where love can reside.

What I'm really interested in, what I'm paying a lot of attention to, is what I call the Startup Life Project. People talk about entrepreneurship a lot. Toronto is one of the most entrepreneurial cities in the world, of course. But starting businesses is the most boring of all entrepreneurial activities. Why? Because the real enterprise is your life. The real startup of your life is taking risks with your heart for explosive rewards. And the best way that you can do that is by falling in love and declaring your love for other people. What I want is cultural renewal on the basis of risk, and that's what I've been doing going from campus to campus all over the place.

I give a lot of commencement addresses and the last charge I'll leave them with is if you consider yourself an entrepreneur, you have two weeks to declare your love for somebody. Call somebody up and say, "I love you." Are you tough enough to do that? You're enough of an entrepreneur to do that? That's the kind of movement that we actually need, and that person by person, by person, by person, will repolarize our culture and ultimately work on our politics.

Click here to read yesterday's excerpt which asks: How did we get into the tunnel of political polarization, and can anything light our way out?

How did we get into the tunnel, and can anything light our way out?

What is the antidote to political polarization?

In a lecture at the University of British Columbia this week, Canada’s eminent pollster, Angus Reid, dug deep into the intriguing data from recent polling commissioned by the think tank Cardus.