George Petrusma knows exactly where he was at 4:03 p.m. on Thursday March 12, and the decision facing him, staff and students at John Knox Christian School in Oakville, Ontario.

“I was having a conversation with all our staff who were in the building at the time. There was a group of about 30 of them,” the principal of the 220-family independent school says. “We were in the staff room where we have this rather large clock, and I looked over at 4:03 and said: ‘That’s exactly how this is going to go.’”

What was “going to go,” of course, was a scramble to figure out how to continue the school year if word came from the Ontario government that all school buildings in the province could have to shut down because of the COVID-19 pandemic.

“It was 4:08, actually, that the government announcement came. On a moment’s notice, we had to recalibrate everything,” Petrusma recalls.

Recalibration is putting it modestly. In mere days, working 16-hour days, the school’s leadership team put together a plan for implementation after “return” from the March Break that never actually ended. It required a technology component to get lessons to kids online. It needed a learning component to decide what curriculum the various grades could manage without direct classroom teaching. And finally. There was the crucial component of a “family care team” to make sure the school’s tuition-paying families were kept in constant communication.

The veteran school administrator describes the myriad of task needed to get up and running with a mixture of exhilaration, bewilderment and wonder that what happened could happen so fast.

“People said to me ‘George, how are you doing?’ I said, ‘Well, I think I’m either living the dream or I’m in a dream. I don’t even know anymore.’ I’ve had all kinds of August (back to school) experience. It’s not a problem. But this was like a first-year August, and we’re trying to direct it from a distance.”

The distance-learning logistics were up and running relatively quickly, leaving time for essential focus on communication with the whole school community: staff, students, parents, and with a savvy nod to current realities social media followers. Emphasis was put on communication that was constant, without fear of overcommunication. 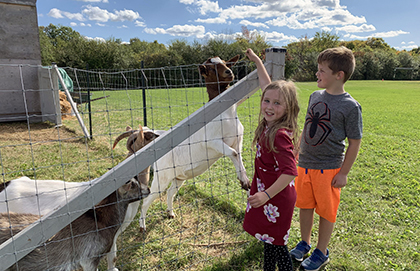 Sticking Up for Christian Schooling
Independence and Inequality
God's Preferential Option for Public Schools? Some Questions

Petrusma began doing weekly video updates mirroring the daily practice of Prime Minister Trudeau and Premier Rob Ford. Staff videos began, too, as did devotional activities to keep the essential Christian foundation of the John Knox in front of all its participants at every level.

“We wanted to make sure that people were seeing us, hearing us, and that there was authenticity and empathy.”

The messages delivered required a precursor decision of their own in terms of content, yes, but much more crucially in the essential posture the school would toward the fact it receives no government funding and is therefore heavily reliant on parents continuing to be willing to pay tuition. There was significant prospect that at least some parents would point out they signed up for their children to be educated in a particular building for a specific number of hours a day. Absent those conditions, the words “we want our money back” were equally probable.

“We had a very honest conversation to figure out for our school whether we were going to assume a community mindset or a consumer mindset. Those are two very different approaches to the idea of tuition and what it looks like.”

In the end, John Knox chose to sustain the mindset of a community that surrounds and supports pupils, parents and families. Special effort was made to ensure that those who, through force of COVID-19 circumstance, couldn’t maintain tuition were helped financially so their children could continue at the school. Again, Petrusma says, the decision was rooted in Christian faith and teaching.

“We pulled back and looked at Scripture, at the (commandment) to love the Lord your God with all your heart, soul and mind, and the (commandment) to love your neighbour as yourself. We tried to weave those things together so the love and trust that we have for our Heavenly Father was the basis of our process and decisions. Love of neighbour was saying ‘Oh, you can’t afford it? No, you’re part of us. Let us rally around and help you.’”

Petrusma says questions have been raised about refunds.

“I don’t want to be Pollyannaish. We have handled about six or seven families that question us about it, and our messaging has been that if the driving factor has been financial hurt, let us come around to you but if your driving factor is a consumer mentality, we’re not going to be doing that. For the most part, it has resonated well in our community.”

Exhilarating, exhausting, precarious and faith-affirming as the experience has been, Petrusma says it has produced outcomes with significant benefits for education well beyond the Christian independent world. The creation of the family care team extended the school’s role past pedagogy to an environment of care for all those involved with John Knox.

“It wasn’t just a case of how is Johnny learning. It was ‘how is your financial situation?’ ‘How is your family coping?’ And we’ve had moments when parents have shared thanks with us for caring for them that way. There’s a thankfulness the sense that the Lord was leading the John Knox community to be the hands and feet of Jesus to each other.”

Now there’s a memory to treasure for an unfolding that began with five minutes notice at 4:03 p.m. on a Thursday afternoon in March.

This is the second of Peter Stockland's series on how some Ontario independent schools succeeded in the face of the COVID-19 pandemic. Read the first part of the series on policy recommendations to strengthen Ontario's education for all students.

Sticking Up for Christian Schooling

Convivium’s Peter Stockland checks out the innovative independent school in rural Eastern Ontario that was denied a chance to pay top dollar for an empty public school building.