Earlier this year, we celebrated our first birthday. Yet as this issue is being put together, the papacy of Francis has not yet completed its first week. So who’s the new kid, and who’s the old timer, on this block?

Sticklers will note that, chronologically, Pope Francis is 76 while our editor-in-chief, Father Raymond J. de Souza, is but a stripling of barely 40 and our publisher is (ahem) hardly much older. But the truth remains that where once we were just newly born ourselves, we have now been present to witness and report first-hand on history—and Mystery—unfolding, as Father de Souza does from Rome in his Sea to Sea from Across the Sea column this issue.

"The conclave is not only mysterious because we can’t see what is happening. It is mysterious because it presents us with a paradox, which is always how the infinite appears in a finite world," he writes. "The conclave refuses to accommodate itself to the world outside, even if the fruit of its work, the new pope, immediately presents himself on the balcony to give the traditional urbi et orbi blessing.

"He appears not to bless the Church, but the city and the world. The conclave refuses to let the world see its work, but then elects a pope for the world. It is astonishingly audacious, and the world would be right to take offence if it were not the will of God. The Church believes it is, and therefore proceeds."

This mysterious shading of the finite and infinite, of time and timelessness, was a chiaroscuro thematic during the papal conclave that brought us Pope Francis, and it is in the April/May issue of Convivium as well.

Age itself sprung the conclave upon us when Benedict XVI shocked the city and the world by announcing that he felt too worn down by years, and too physically weakened, to bear the burdens of the Chair of St. Peter.

"I grow old, I grow old/I shall wear my trousers rolled," Pierre Elliott Trudeau long ago quoted J. Alfred Prufrock from T.S. Eliot’s great poem during an interview with the CBC’s Peter Gzowski as our once preternaturally youthful prime minister entered the winter of his life. 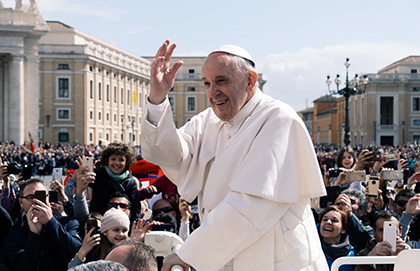 Two Popes: One Doctrine
From Sea to Sea: Lessons in Poland
Small Talk

Benedicts abrupt departure was both as confusing as my preceding sentence and bore all the world-weariness evoked by those famous lines. Nor were clarity or lightness to be had from most of the 4,000-plus journalists who descended on Rome, bearing the certainty of those who must pontificate professionally on matters they are entirely clueless about in private life.

Squeezed up against deadlines with precious little, if any, information to convey, they spouted like gargoyles in a week-long rainstorm. None of it was memorable 10 minutes later except for how completely wrong virtually all of it turned out to be when the truth of the new pope’s identify was finally revealed.

In that sense, the reporters and commentators at the conclave were perfect, up-to-the-minute simulacrums of the pervasive moral skepticism of the age that Richard Bastien skewers so effectively in this issue.

"With the advent of modernity, truth has generally come to be understood as always relative to some standard of justification generally accepted in a particular social or cultural context," Bastien says. "According to Judeo-Christian tradition, however, asserting that something is true does not consist solely in affirming its compliance with a particular standard of justification. The Judeo-Christian tradition denies that truth is a mere cultural construct... and affirms instead that there is a culture-transcendent truth that can be grasped by means of universal reason."

That is the reason, of course, that Catholics have a pope. It is not, as some in the media would have it, merely to oversee a particularly tetchy Roman bureaucracy. (Who in his right mind would want that job?) It is not, as others kept telling us, to regard the worldwide faithful as segments of theological market share and continually rebrand the Church to keep the most desirable demographic coming through the doors each Sunday.

No. The pope is the pope to a) preach the eternal Truth of the Gospel and b) safeguard that Truth so that the Church remains, like Christ, steadfastly the same yesterday, today and tomorrow.

As Ryan Topping writes in his new book, excerpted this issue, out of that steadfastness comes the catechesis that would, if we let it, lead us from the rubble of the cultural ruin around us. "Have we grown too old for Catechisms?" Topping asks rhetorically before setting out the argument that definitively answers: no.

"The resurrection of Lazarus did not mark the end of history," Topping writes. "What the rising of this dead man’s body made tangible was the power of God at work in a new age. Christ raised Lazarus to evoke faith. Christian culture can evoke hope. A vibrant Catholic culture makes intelligible a mode of life and the habits of being that fit us for Heaven."

Convivium, while Catholic in its origins, would extend that vibrancy and intelligence to include all those who share faith in our common life in the hope that we will grow old, and ever new, together.