I learned on my summer vacation something I should have known long ago: that the word “motel” is a compound of “motor” and “hotel.”

According to the Online Etymology Dictionary, it dates from 1925 when a publication called Hotel Monthly reported that “(t)he Milestone Interstate Corporation ... proposes to build and operate a chain of motor hotels between San Diego and Seattle, the hotels to have the name 'Motel.'”

The newly minted places of rest were meant to meet the need for speed of an increasingly automotive travelling public. They were the sign that constant motion had become socially paramount, transforming even how we stopped and stayed overnight.

It somehow seemed fitting to discover, while vacationing, that this 92-year-old compression of language as a concession to the arrival stage of our frantic transience.

More a propos yet, in hindsight, was my motivation for belatedly looking up how “motel” came into English. My wife and I were wandering with our cameras through a small town on Quebec’s Gaspé Peninsula when I came across two abandoned buildings on the main tourist strip. They were exactly the thing to whet the whistle of what my friend, the brilliant Ottawa photographer Ruth Dick, calls my “penchant for gone to seed motels.”

Turning my back on the photogenic sunset, post card sailboats and alluring bright waters of the bay across the road, I was – predictably and addictively – mesmerized by the locked up reception office with the “fermé” sign hand written in the window. Since childhood, I’ve been captivated by the mysterious collapse into dereliction of places where people once took refuge and found sleep.

Our language, that tireless pilgrim, ever seeks to remind us of connection between the fruits of the spirit and the gifts of giving welcome, comfort, protection, rest. 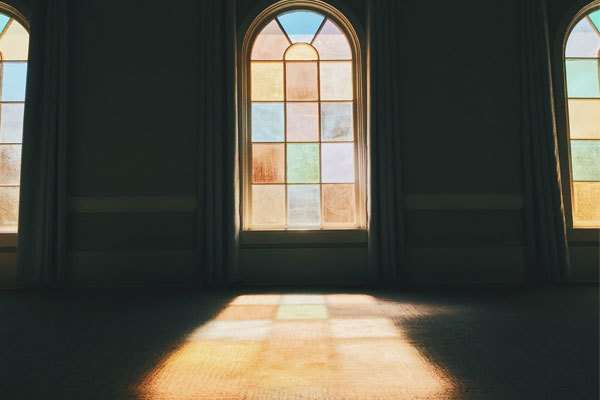 Shuttered businesses are, of course, commonplaces of capitalist life. In our daily lives, we often notice them only in cases of disruptive inconvenience, such as when the coffee shop where we love to meet and chat suddenly becomes, say, a Church of Scientology.

Even traveling, we’re generally aware of closures only as cumulative markers of a region’s overall commercial health. When we roll through a town and notice brown paper rolled across a single shop window, we take it as a sign of mismanagement or bad luck. When it is a visual theme hopscotching the length of a given Main Street, we intuit that some tectonic economic shift has opened fissures of financial struggle, family dislocation, looming impoverishment.

There are failed curiosities that can catch our eyes as well. On this recent trip, I noticed the number of bankrupt bowling alleys in towns and villages through the Gaspé. Their oddness stood as a stark exclamation point to the thesis of Robert Putnam’s classic study, Bowling Alone. Our voracious post-modern addiction to autonomy begets a self-fulfilling prophecy of ever-expanding isolation and loneliness.

Such failures always evoke in me curiosity about why they happened. They also provoke a reverence at being in the place where someone’s dream has died. For reasons I’ve spent years understanding, the shell of an old hotel, and especially a “gone to seed” motel, touches off distinctly spiritual resonance.

It seems paradoxical given the reality of motels as getaways where carnal appetites, not those of the spirit, are infamously engaged and indulged. But even that adds to the feeling that what has failed is more than the commercial. It is the human.

Years ago, I wrote a long short story about two former childhood friends who reconnect in mid-life and conduct an adulterous affair by breaking into a particular room of the forsaken Motel Raphael that once truly stood just off Montreal’s Highway 20. As I was writing the story, I used to sit in a nearby parking lot and ponder, observing the physical disintegration of Motel Raphael, the human need to find the sanctuary of open arms even within a desolate space.

What I learned on this year’s summer vacation is that hotels, and their speeded up offshoots motels, create this sense of refuge because their origin as enterprises is housed squarely within the great spiritual gift of hospitality. Indeed, our word “hotel” shares roots with hostel, hospitality and hospital, which itself comes from the Old French for a place of shelter or lodging by way of the Latin word for a guesthouse or inn. Our language, that tireless pilgrim, ever seeks to remind us of connection between the fruits of the spirit and the gifts of giving welcome, comfort, protection, rest.

To find such a place lost, even to purely economic causes, is to be called back to the childhood memory of dislocation and sorrow at the words in the Christmas narrative: “And she brought forth her firstborn son, and wrapped him in swaddling clothes, and laid him in a manger; because there was no room for them in the inn.” It is to wonder once more why there was no place for Him to lay His head.

We move on, of course. Travelers all, we live in a time, in a world, that does not dwell. What is lost is invariably compounded into something new. But moments do come when we learn what we should have known long ago. Or perhaps did.

Shadow and Light in the Post-COVID Church

Two long-time journalistic and personal friends, former CRTC commissioner Peter Menzies and Convivium's Peter Stockland, weigh the future of faith life in a Canada where churches have been shuttered by government order.

Publisher Peter Stockland offers a compelling defence of how faith is inextricably tied to his identity and vocation as a journalist, thereby illuminating the public sphere and his place in it.