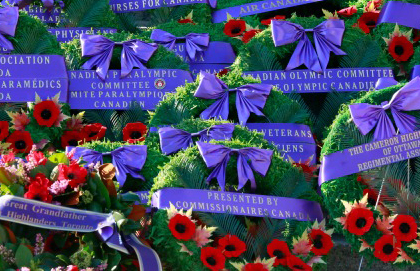 Peter Stockland was in Ottawa for the Remembrance Day ceremony today and was reminded of this poem. We've reprinted it here along with his photographs of the day's events.

The age of trumpets is passed, the banners hang
like dead crows, battered and black,
rotting into nothingness on cathedral wall.
In the crypt of St. Paul’s I had all the wrong thoughts,
wondered if there was anything left of Nelson
or Wellington, and even wished
I could pry open their tombs and look,
then was ashamed
of such morbid childishness, and almost afraid.

I know the picture is as much a forgery
as the Protocols of Zion, yet it outdistances
more plausible fictions: newsreels, regimental histories,
biographies of Earl Haig.
It is always morning
and the sky somehow manages to be red
though the picture is in black and white.
There is a long road over flat country,
shell holes, the debris of houses,
a gun carriage overturned in a field,
the bodies of men and horses,
but only a few of them and those
always neat and distant.

And I know this belongs
with Lord Kitchener’s mustache
and old movies in which the Kaiser and his general staff
seem to run like Keystone Cops.

That old man on television last night,
a farmer or fisherman by the sound of him,
revisiting Vimy Ridge, and they asked him
what it was like, and he said,
There was water up to our middles, yes
and there was rats, and yes
there was water up to our middles
and rats, all right enough,
and to tell you the truth
after the first three or four days
I started to get a little disgusted.

Oh, I know they were mercenaries
in a war that hardly concerned us.
I know all that.
Sometimes I’m not even sure that I have a country.

But I know that they stood there at Ypres
the first time the Germans used gas,
that they were almost the only troops
in that section of the front
who did not break and run,
who held the line.

Perhaps their only motivation
was a stubborn disinclination.
Private McNally thinking:
You squareheaded sons of bitches,
you want this God damn trench
you’re going to have to take it away
from Billy MacNally
of the South End of Saint John, New Brunswick.
And that’s ridiculous, too, and nothing on which to found a country.

Still
It makes me feel good, knowing
that in some obscure, conclusive way
they were connected with me
and me with them.