My son is a professional historian. I, as he constantly reminded me during his undergraduate days, am a mere journalist.

I suspect, though, that his eagerness to pursue history as his life’s passion was nurtured by a childhood spent listening to the key questions that journalists routinely asked in the days when their trade was still regarded as history in a hurry. Questions such as: “What happened?

When? Why? Who said so? How do we know? Where’s the evidence recorded for that?”

Lament falls daily from my lips that such essential journalistic questions have become relics of the past. I find a painful absence of such questions in a frighteningly high percentage of the journalism I now read. I confess, as well, to having become a relic of the past myself, fixed in amber by “the older I get the better I was” syndrome.

The only good news, it turns out, is the otherwise bad news that journalism now has company in its misery. This malaise of absent inquiry, it seems, has spread to the world of professional historians. At least, it’s becoming a major concern for American academics, according to Eric Alterman writing in this week’s New Yorker magazine.

Alterman, who has a PhD in history, teaches English and journalism at Brooklyn College, and writes a regular media column for The Nation, quotes a study showing that history has declined as the declared major of university undergraduates by about a third since 2011.

“With slightly more than twenty-four thousand current history majors (in the U.S.), it accounts for between one and two per cent of bachelor’s degrees. The decline can be found in almost all ethnic and racial groups, and among both men and women,” Alterman writes.

Much of that drop, he says, is attributable to parents pushing their kids toward job-oriented STEM fields such as engineering, nursing, biology, and above all computer science, which has seen its number of majors more than double since 2013. (For many reasons, comparable Canadian figures would probably require a significant research project to ensure they’re based on apples-to-apples data.)

It’s loss of the vital reality that truth can only emerge out of what is behind us, that is from what we remember to know, and know to remember.

What both countries evidently share is the malaise that follows the falling-off of historic sensibility. It’s much worse than just generalized public amnesia about specific events. It goes far beyond the ability to distinguish certain facts from obvious fictions. It’s loss of the vital reality that truth can only emerge out of what is behind us, that is from what we remember to know, and know to remember. It requires asking, over and over, the basic questions about how we got here from there.

The truth-recalling function of history makes it a critical field of academic study. Equally, it makes the historic sense integral to proper journalistic function in a democracy. To borrow a phrase from long ago, its loss is not merely alarming to pointy-headed professors who can’t park their bicycles straight on campus. It has real-world consequences for our practical capacity to truly understand what is going on and why.

Remembering what happened yesterday is our first and best line of defense against any bill of goods that someone perpetuating a particular story might be trying to sell us today.

When one in five Canadians under the age of 34 tell a pollster they don’t know what the Holocaust was or whether they’ve even heard of it, to cite a stark recent example, we’re a society on its way to doing the hideous evil work of Holocaust deniers for them. Who needs to deny the Holocaust, after all, among people approaching the vanishing point of remembering it happened?

How, in consequence, can such a people possibly make sense of the events whirling around devoid of the basic cognitive principle of historic cause and effect: of the ability to say such and such is happening, at least in part, because of such and such that happened a decade, a generation, a century or more ago. 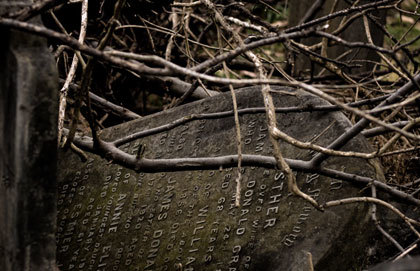 The withdrawal of Britain from the European Union, using an example much in the news, is a dog’s breakfast to try to sort through at the best of times. But the looming failure of Brexit, which could have serious global economic consequences approaching the 2008 world financial crisis, is impossible to comprehend without at least a smattering awareness of what England did by forcing the partitioning of Ireland in 1920-21.

Ireland’s refusal to budge on the nature of the border between itself as a sovereign nation and Northern Ireland as an anachronistic leftover of British imperialism is not vengeful stubbornness. It arises from the lived history of all that transpired after Prime Minister David Lloyd George, Winston Churchill and others imposed that boundary under threat of all out invasion of Ireland by England. To forget or conveniently ignore that is worse than a mere political lie. It’s utter denial of historical reality.

It’s not just a fact that is wrong. It’s part of a framework deliberately set up for us.

In his New Yorker article this week, Eric Alterman shows why the decline of historical sensibility leaves us so vulnerable to lying, yes, but even more so to the manipulations of demagogues such as Donald Trump.

“Trump,” Alterman writes, “is the king not only of lies but also of ahistorical assertions.”

He points in some detail to the way in which the U.S. president’s recent statements about Russia’s invasion of Afghanistan in the 1970s were not only pernicious falsehoods, but actually fabricated a reality that only those with memory and history at their command could say was a delusion.

There’s another immediate example of what the distinction between political lying and ahistorical assertion constitutes a worthy difference. It comes from the recent media brouhaha over that group of Catholic students involved in a bizarre quasi-conflict during the March for Life in Washington, D.C.

The Indigenous man at the centre of the so-called controversy, Nathan Phillips, was identified as a former Marine who had served in Vietnam. It was self-evidently a troubling ahistorical claim, without necessarily being a deliberate lie.

Phillips was correctly identified as being 64 years old. Even my journalist’s untrained historical sense, combined with simple arithmetic, and a quick Google curiosity check, showed me in about two minutes flat that there’s no way the statement could be true or, more importantly, historically accurate.

Being 64 years old means Phillips had to arrive to fight in Vietnam at almost the exact moment the last American troops were being withdrawn in 1972. If you do the math, you can easily see Phillips, after turning 18, could simply not have had time to go through basic training and be shipped to Vietnam when everyone else was homeward bound by Nov. 30 of that year. Indeed, there were media corrections a few days later admitting Phillips was never in Vietnam. In fact, he never even claimed to have been in Vietnam. It was an ahistorical journalistic claim compounded by being accepted and then repeatedly reported as truth.

Okay. So. A tangential mistake, yes? Let it go, right? Well, if you like. But there is a good reason not to like letting it go.

It’s a reason that starts with asking “why” that particular bit of false history was passed along as easily as such claims tend to pass from the lips of Donald Trump? Why, the question has to be asked, was it repeated without being challenged when it was so obviously historical impossible? Here’s the high probability answer: because it fit with, and helped make credible, the narrative construction of Phillips as a warrior figure pressed into service to do his duty in circumstances not of his making or approval.

That’s the quintessential Vietnam soldier mythology, and it was easily transported to Phillips in the conflict he found himself mediating with a group of high school boys in purportedly prima facie racist Make America Great Again red hats. What made it a great story, until it wasn’t, was the willingness to refuse to pursue the easiest of historically-based challenges.

It requires asking, over and over, the basic questions about how we got here from there.

Bluntly: if we know when the Vietnam War ended (or are even prepared to ask Mr. Google to tell us) we can’t just let it go.

As citizens, especially as democratic citizens, we have a minimal obligation to at least raise one eyebrow, burn one brain cell, open now our lips to ask: “How does that fit with what history teaches me, and if doesn’t fit, why is someone trying to make it fit for me?”

Why do we have that responsibility? In Eric Alterman’s pithy words: “A nation whose citizens have no knowledge of history is asking to be led by quacks, charlatans, and jingoes.”

Of course, we don’t all have time to school ourselves in the past minutiae of each fresh issue or public alarum that confronts us in every passing hour. History takes time, which most of us already have much too little of. But the historical sense doesn’t demand devouring 50 pounds of impenetrable historiographical prose a week. It can start with a light snack by simply asking: “What happened? When? Why? Who said so? How do we know? Where’s the evidence recorded for that?”

That might sound like, and be easily dismissed as, mere journalism. But it’s a critical precursor to the most important role of history, which is constantly reminding us of the relationship between past and present. It refuses to let us forget we were somewhere else before we were here. It insists where we were still matters, if only so we can more clearly and truly understand where we are.

What it means to remember

In fairness, the reporter did insert a paragraph or so of "balance" where he magnanimously allowed parents and organizers to insist—ha-ha-ha—that the National Bible Bee is about developing Scriptural understanding and raising a generation of good Christian ambassadors, not just a venue for pre-pubes...

Time to Bury the Bulls of Donation

Writer Douglas Farrow offers comment and critique on the Truth and Reconciliation Commission.