Federal Conservatives were fussed in the Commons this week about Facebook, firearms, infrastructure, and families. Religious freedom? Ummm,  yes, early on. And then, whoops, no, never mind.

To their credit, the Tories stood united while taking a pounding Monday night from both the governing Liberals, and the other opposition parties. Their motion calling on Prime Minister Trudeau to amend the divisive new Canada Summer Jobs application process was defeated by a vote count of 207-93. Down in flames, out with the ashes, and swept away by hurricane winds, it might seem.

Except that, even while appearing to have been so rudely routed, Conservative MPs were presented two powerful impetuses to rise again and continue to fight the issue.

The first was the tin-eared stubbornness of the government benches in refusing to heed the outcry across the country against wedging a so-called “values test” into a straightforward federal program to give students summer work.

It’s not just religious leaders, charities, and NGO’s that have furiously protested the application’s explicit requirement to support abortion and sexual minority policies.

Journalists, generally no great friends of faith, have been surprisingly vigorous in their condemnation of the bizarre “attestation” provision. They’ve critiqued it in numerous venues for being compelled speech, government overreach, and self-evident violation of various Charter rights.

A small third group, perhaps the most important of all, has been valiantly working to change government minds from within the Liberal, NDP and Bloc Quebecois caucuses themselves.

He says unless Canadians wake up, people of faith will continue to see the narrowing of the public space open to religious belief.

“I believe in reproductive rights,” Simms told Catholic News Service reporter Deborah Gyapong and me following the vote. “However, this was not the way to address it. For me, this was a principled (stand). I stood up because I believe the attestation was insensitive to a lot of people.” 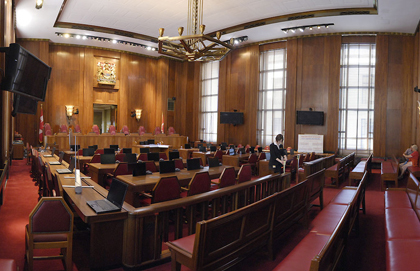 Simms said he doesn’t know if he’ll be punished for standing on principle. At least one veteran Liberal MP assured me: “It will not be without consequences.”

The NDP’s David Christopherson, who is also pro-choice, seemed unperturbed about potential caucus recrimination. He explained his defiance by insisting the attestation “took away the fundamental right of Canadians” to peacefully protest laws they don’t like.

Those individual acts of MP courage, along with the nation-wide clamour against the summer jobs “values attestation” should, you would think, be a strong second motivator for federal Conservatives to keep the cause alive, if only to seek its immediate removal from the application process for next year.

But in the aftermath of Monday’s vote? Crickets, as they say. Neither on Tuesday nor on Wednesday was a single query posed in daily Question Period about the government’s insistence on keeping the “values test” provision, despite its implications for religious freedom. No one even asked how a prime minister famous for his ability to act out an on-cue tear jerk, felt about being described as “insensitive” by one of his own MPs.

“We’ve spoken a lot about the issue. There are a lot of other issues to deal with,” one Conservative MP told me.

And it’s true, there are. Among those raised by the Tories this week:

All were certainly worthy of being raised in our House of Commons, of course. Yet what, if anything, gets lost when the run of day issues crowd out a government act that converges against freedom of speech, freedom of conscience and, especially, freedom of religion? An interesting answer to that comes from Carl Hétu, who was in the public gallery for Monday night’s vote on the Conservative motion.

Hétu is Canadian National Director for the Catholic Near East Welfare Association. His job is dealing with the daily mistreatment and suffering of Christian minorities in the Middle East, India, Northeast Africa and Eastern Europe. What he saw with the vote on the Conservative motion came from his substantive international experience with religious discrimination, and even persecution, against Christians worldwide.

He says unless Canadians wake up, people of faith will continue to see the narrowing of the public space open to religious belief. Watching the vote on the Conservative motion, he saw evidence of the rise in Canada of a variation on anti religious freedom ideology that he’s witnessed under oppressive regimes globally.

He wondered how long  it will be before, for example, Global Affairs begins denying to Catholic, Christian and other faith groups for overseas funding because of their refusal to “attest” to support for abortion and sexual minority policies. He also wondered why some MPs he knows refused to stand up for the freedoms at the heart of the Tory motion, and against government suppression of those rights.

“You don’t want to be alarmist, but we take everything for granted and fail to see things happening in front of our own eyes,” Hétu said after the vote. “I think this vote, and the (values attestation) itself, are evidence that there are people at the government level motivated by (anti-faith) ideology.

“When I saw the (Monday) vote, I saw MPs that simply didn’t care. I don’t think they even understand what the fuss is about.”

A key role of the Official Opposition, of course, is to raise sufficient fuss to make the government understand what matters to Canadians. The Conservatives did so bravely early on. Let’s hope their failure to keep the values test issue alive this week isn’t a case of out of sight, out of mind.