In Steven Spielberg’s newspaper nostalgia movie The Post, business side bosses confront Editor Ben Bradley with warnings the daily might cease to exist if it publishes the Pentagon Papers.

“If we don’t publish, the Washington Post will already have ceased to exist,” Bradlee snaps back.

It’s a paradox the fine minds running the Canadian newspaper business might want to mull over before hooting huzzahs over an expected windfall in tomorrow’s federal budget. Pre-budget media reports say the Liberal government will commit up to $50 million in public funds for various newspaper industry bailout schemes.

Much of the new money, according to a Feb. 23 Toronto Star story, will help community newspapers make the transition from print to digital. Other millions will reportedly create an innovation fund to let newspapers operate as non-profits, which they already have a great deal of experience doing anyway. Well, the non-profit part. The non-profit operating part? Not so much. A 2017 study showed 225 weekly and 27 daily newspapers in Canada have merged or gone bankrupt since 2010.

All the money will apparently be funneled through independent non-governmental organizations such as…. Well, we don’t yet know who’ll be doling out the cash. More TK on that detail, as they used to say back in the day.

But rest assured, there will be no strings attached. Provided newspapers produce reportage that is “trusted, professional…and local,” they’ll be let into the lineup to ask for tax money handouts. And who will determine the precise meaning of those three strings, errrr, eligibility criteria? More TK on that, too. 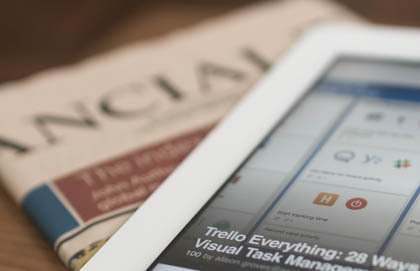 Crossing the Media Landscape
Editorial Crackerjacks
Melt, baby, melt
Ultimately, that truth-acknowledging imperative, not the mechanics of paper versus digital blips, is what matters to what a newspaper was, is or will be.

Yet do rest doubly assured none of the politicians who spend millions of public dollars annually to persuade the voting public to vote for them will ever dare to intervene in the editorial independence of newspapers reliant on an independent non-governmental organization funded by those self-same democratic politicians. It just won’t happen.

And you know what? It won’t. Why? Because by directly taking the government dole, newspapers will no longer exist as newspapers. Some entity, some organization, some private business will be scooping up public cash to continue publishing something that has the appearance of what newspapers used to produce. But as the Ben Bradlee paradox illuminated so starkly in The Post makes clear, whatever they become, they will have already ceased to be what they were.

What matters is not the loss of newspapers as the guardians of democracy depicted in the huff and puff movies such as Spielberg’s The Post. Newspaper companies, whether running printing presses or dealing out digital content, have never been guardians of democracy.  For the most part, they have been voyeurs of the vanities, watching, reporting, judging, the status game in a particular place at a given moment. Who’s up? Who’s down? Who’s ahead? Who’s behind? Who is that strange Canadian fellow towing his family around India dressed as if they just broke out of a saree shop in Episode 59 of The Monkees?

The salvation of newspapers from total triviality never involved anything so la-di-da as safeguarding democracy. It was a function of their means of production. In the halcyon days when newspapers still moved the news, and radio or TV ran to catch up, the first question the electronic media always had to ask was: “Do we have audio? Do we have pictures?” Newspapers, by their slower processes, had some time, and therefore felt an imperative, to ask: “Wait a minute. Is this story true? If so, why does it matter?”

In reality, such questions were invariably raised by some lone, one-eyed, night desk editor teetering into the downward curve of his or her daily mood swing, long after editorial management pashas such as The Post’s Ben Bradlee had left for the day. But that need not concern us here.

Is it true, and why does it matter, were questions newspapers could, and did, ask at least often enough to burnish their own mythology but also, and this mattered, to serve something like a quasi-useful social role at their own, not the public’s, risk and expense. At their best, their function was not to give readers “the Truth.” It was to impart to citizens confidence that an existing institution took “what is true” as a sufficiently serious imperative to ask questions solely for its sake.

Ultimately, that truth-acknowledging imperative, not the mechanics of paper versus digital blips, is what matters to what a newspaper was, is or will be. Even honoured in the breach, it is the bright line that has traditionally separated journalism, especially newspaper journalism, from politics.

Politics, after all, is necessarily about the service of truth to power. That’s not denigrating politics or politicians. It’s the cold reality that has made the dividing line with journalism, again especially newspaper journalism, so crucial not only to democracy, but to our social order.

In a future column, I want to explore the forces that are effacing that bright line. They go well beyond the desperate economic plight of Canadian newspaper companies. For today, suffice it to say that tomorrow, if Canada’s newspaper companies grab the cash on offer from politicians, they won’t just be crossing the line. They will be serving the cause of continuing to publish even as they have already ceased to exist.

It's no news that newspapers and other print publications are staggering under the weight of debt and plunging readership. But Marcel Vander Wier discovers that Christian publications are showing surprising resilience amid the general decline and fall.

I mean you can learn something about the peculiar way the particular class of people privileged enough to be newspaper editorial writers see your world The editorial, in that weird and wonderful mix of gratuitous influence, self-importance, and detachment from reality that characterizes newspapers a...

He also loves newspapers, which is why he returned to Postmedia to try to save it from the catastrophic incompetence of its previous owners It failed to include the truth that, at a time of intense content competition among all media forms, some Postmedia papers are being pressed to rake in almost 4...