Convivium: Founded in 1989, Image began as a work of literary and artistic love, and has endured and indeed flourished across the years to become one of America’s leading literary journals that seeks to bring the intersection of faith and art into the public sphere. Can you describe the moment that Image was born in “a basement in Front Royal, Virginia?”

Gregory Wolfe: That moment took place in the aftermath of the first round of the “culture wars,” in which art played a central role. You may recall that in the 1980s the photos of Robert Mapplethorpe and “Piss Christ” by Andres Serrano were at the heart of those conflicts. My friends and I were concerned that religious believers and non-believers alike had become so alienated from contemporary art that they had given up on it. We also felt that too many people agreed that art inspired by faith had died sometime during the twentieth century. We were convinced that this tradition, running from Gilgamesh to Flannery O’Connor, was still alive and we started Image to search out and showcase that work.

Convivium: Contemporary literary voices from Henri Nouwen to Madeleine L’Engle have expressed their appreciation for the work that Image undertakes. Some, such as Jeremy Begbie, have described the journal as “a unique place in the religion/arts world.” Indeed, countless readers have cited Image as fulfilling a cultural and spiritual need in their own life. What is it about Image that has resonated so strongly with your readers over the years?

Gregory Wolfe: The intuition that art and faith have much in common and can profoundly enrich one another. Art and faith are grounded in narrative and symbol—both are exploratory in nature, reaching out to discover a mystery not entirely known. Art without faith can become hollow and narcissistic; faith without art can become moralistic and abstract. When they come together in the hands of a disciplined artist who is also a spiritual wayfarer, art and faith resonate deeply.

C: Your publication has featured veritable contemporary voices ranging from Chimamanda Ngozi Adichie to Mary Oliver to Elie Wiesel over the years. Has the tone of contemporary spiritual voices shifted in the last 50 years? If so, how might you begin to describe this shift?

GW: It would be misleading to say that there is a single “shift.” There have been many “shifts” and they come in many varieties. One of the most basic changes is the assumption that religion automatically entails a flight from reality into fantasy (that tired Freudian notion). Now even secular critics seem open to the possibility that, for example, a great novel can portray religion as something that calls its characters to engage reality with great intensity and seriousness.

C: Your website reads, “our focus has been on works of imagination that embody a spiritual struggle, like Jacob wrestling with the angel.” Can you share with our readers a little bit about how the theme of spiritual struggle has unfolded within the pages of Image throughout the years?

GW: What does the story of Jacob wrestling the angel mean? I take it to be a metaphor for the infinite desires of the human heart—our need to ask questions, reach out into the mystery of things, and come away with some small increase in our understanding. As a reader you know the very human Jacob cannot defeat this representative of the divine, but his sheer determination to come away with something is admirable. There’s also a dignity to Jacob’s deeply human persistence. Of course, there is a cost to this tussle: the struggle to understand can leave us wounded, yet it is impossible to separate pain and knowledge—they go hand in hand. All of this is central to how great art functions.

Art and faith are grounded in narrative and symbol—both are exploratory in nature, reaching out to discover a mystery not entirely known.
Related Stories 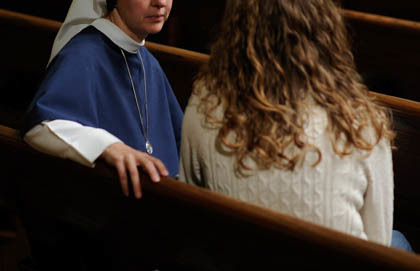 C: A fundamental part of the Image experience seems to be the formation of relational communities that bring the reflections and wrestling that unfold across the pages of Image to manifestation in the form of workshops, conferences, seminars, fellowships, online classes, readings, concerts, and other programs. What have you learned about translating online and literary community into relational fellowship?

GW: A humungous amount. We knew from the beginning that while the journal was the “flagship” program, we would need to help foster dialogue and conversation about the subjects broached in the pages of Image. Reading may be a solitary activity but if we do it right it should impel us to share what we’ve gleaned and find out how others have responded to it. We think that Image isn’t just a collection of individuals but has become a “movement,” which is how to describe what happens when a large group of people approach a set of questions from a shared perspective.

C: In 2014, Image celebrated its 25th anniversary. As founding Editor, you have been on the journey of publishing this journal from its very inception. What are you most proud of?

GW: Our independence. By that I do not mean that we haven’t received support from many individuals and institutions. Rather, I mean that Image is not beholden to any single tribal group in society. We are not the Evangelical journal or the High Church journal; we are not the neoconservative journal or the New Left journal. Image transcends those tribal groupings. We are ecumenical and inter-faith. (To me, personally, this is a very Catholic approach but that’s for another interview!)

C: Can you identify one theme or an aspect of Image as it has evolved over the years that has most taken even you, its founding Editor, by surprise?

GW: How severe the financial cost of our independence would be. I really was naïve about the way that money and power are focused into tribal groups these days—and especially how politics drives philanthropy—at least philanthropy in the realm of cultural and intellectual organizations. To be willing to support Image you have to believe in its mission—which doesn’t so much “transcend” our tribes so much as seek to establish a series of bridges between them—you have to have a broad perspective and a long-term view. For a journal of our age and track record, we remain severely under-funded. That won’t change until people come to understand the importance of going out from their village to encounter the other.

C: In a moving piece entitled, Scenes from an Editorial Life, you share honestly about the countless challenges that accompany the undertaking of a project such as Image. Could you share some of those challenges with our readers?

GW: As I wrote in that essay, one of the primary challenges is trying to prevent the stresses and strains of doing good from turning you into someone...bad. It is hard to battle for something for years and not become...combative. It takes more of an effort than it should to step back and see how full the glass is, how much there is to be astonished by and grateful for. Like everyone else, I’m a work-in-progress on these matters.

GW: My first instinct is to shamelessly name drop and say that Annie Dillard emailed me to say that the current issue of Image is “the best ever.” But the one that has truly stuck with me for many years (written by a Canadian, incidentally!) is the one that said: “Your publication, if I may put too fine a point on it, saved my faith in the possibility of the recovery of the religious imagination and truth in art. And, while I'm at it, quite likely saved my faith, full stop!” What can you say after someone makes a statement like that?

C: As a leading voice, on a quest to “showcase for the finest art and literature of our time, works that grapple with the moral, spiritual, and intellectual experience of the Judeo-Christian tradition,” what’s your vision for the future of this conversation?

GW: I make no claim to prophetic insight about the future. I certainly hope that our pages will feature more works by, and dialogue with, Islamic artists and writers. That is a conversation that is only just get started. I hope in the future it won’t be necessary to explain that great art and literature aren’t “elitist” but essential to any mature human being’s balanced mental, emotional, and spiritual diet. As with the recent rediscovery of listening to music on vinyl records for the warm, analogue sound, I believe that the reading of printed books and journals is going to continue to flourish as a basic human need. My (Catholic) joke around the Image office is that “paper is the eighth sacrament!” And yet, alongside paper, Image will continue to have a digital presence, too! Finally, we do have ideas about even more ambitious projects, such as founding an artists’ colony for people of faith. Here’s hoping I get to see a goodly chunk of that future.

The Politics of Apocalypse

Debate rages on whether it’s possible to engage a militantly secular age, or if retreat is, in Leonard Cohen’s words, “the only engine of survival.” Robert Joustra and Alissa Wilkinson in their book How to Survive the Apocalypse: Zombies, Cylons, Faith & Politics at the End of the World, find the answer in Daniel, a prophet who profited from an apocalypse by his strategic sense of loyalty.