At Tuesday's Cardus-Convivium event, author George Weigel described Pope John Paul II's life as the "finger of Providence pushing him along a path" of discernment.

Fr. de Souza and Dr. Weigel at the March 17 event

It took the future Polish pope much of his youth even to decide to become a priest, Weigel told an audience at Toronto's Tyndale University College and Seminary. Interviewed on stage by Convivium's editor-in-chief, Father Raymond J. de Souza, Weigel pointed out that once young Karol Wojtyla did undertake his priestly mission, he harboured no desire to ascend through the hierarchy of the Catholic Church. He was happy to be in his beloved Poland, doing God's work with his flock.

His happiness was not, however, a sign of either lack of ambition or false humility. Rather, it arose from a willingness to listen, often with a mystic's intensity, to what God wanted him to do. Even more crucial was his willingness to put God's discerned call ahead of what Wojtyla himself could see as possible in a self-directed life. Indeed, during his research and writing for the definitive two-volume biography of John Paul II, it became clear to Weigel that the future saint developed, early in life, an interior capacity for tenacious resistance to the "tyranny of the possible": doing solely what the world limits us to rather than committing to what God calls us toward.

Early family tragedies gave rise to that interior resistance, a fortitude subsequently strengthened by the terrors and deprivations of life in Nazi-occupied Poland.

During the war, Wojtyla and some friends would gather secretly for literary evenings. On one such occasion, a Nazi sound truck drove through their neighbourhood barking orders at residents. Wojtyla calmly kept reading out loud the piece of literature he was presenting to the group, steadfastly ignoring the tyranny right outside his door. 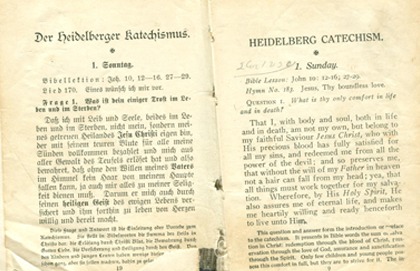 Likewise, though obviously minus the life-threatening circumstances, Pope John Paul II pressed ahead with an iron-will on his plans for a series of World Youth Days to reinvigorate the Catholic Church through evangelization of the young. There was fierce resistance from many of his brother bishops and the ecclesial bureaucracy in Rome. The Youth Days went ahead, and continue to draw millions long after John Paul II's death and canonization.

The cardinal with the unpronounceable Polish name could, Weigel said, have simply gone to Rome after his elevation to the See of Peter and presided as a pontifical caretaker over a Church in decline, in retreat from the world. He refused. He bowed his knee to God alone, not to what human beings around him claimed was possible.

The lesson of John Paul's life, his biographer told the Tyndale audience, is that the finger which providentially pushed him where he might not have wanted to go is, in reality, pushing all of us, too. It requires of us a willingness to listen and discern God's vocation for us but, much more, the confidence and trust to keep listening and discerning even if it seems a vocational mistake has occurred.

"The finger will point us back to the right path," Weigel said.

What's required, in turn, is enduring acceptance of the truth that such a thing as a "right" path exists. What's required is a living out of such truth even in a relativized culture's tyrannical insistence that "right" and "truth" are not possible. What's required is adherence to, and rejuvenation of, a "human moral grammar" essential to, but also emerging from, the shared conversation of people of Biblical faith.

The very setting for the conversation between Father de Souza and George Weigel was silent testimony to the power of that shared conversation. The new Tyndale campus is the former Mother House of the Sisters of St. Joseph, who sold the property to the Evangelical university several years ago when the decline in vocations to the Catholic order made keeping it unsustainable.

As Father de Souza wisely pointed out, that transition from Catholic order to Evangelical seminary, unimaginable only a generation or two ago, went beyond the tyranny of the possible to ensuring that the Christian conversation will continue and God's Word preached. And as George Weigel noted, the ultimate purpose of that conversation is beatitude—happiness—in following the path the Providential finger pushes us along.

"The whole point is beatitude," the biographer of Saint John Paul II said. "The Sermon on the Mount begins with a program for human happiness: Happy are those who ...'" And happy are we who have been witnesses to the faith, the hope, and the charity of this inspiring life.

Taking the Heidelberg Catechism to Work

Peter Stockland's excellent blog this week reminds us that "we are called to engage in the political life of our country not to win but to witness ...

'There's also another line of authority in Canada'