Something to watch during the Paris climate summit is the way in which wind and rain become a mix of fact, faith, moralism and imagination.

For whatever truths science might settle about whether or not the globe will warm in future, their political extension will require resort to pathetic fallacy: the waters must rise because David Suzuki sighs.

We are the culprits in the chaos of the heavens not as a matter of material fact but from steadfast conviction about our apocalyptic fate. We are doomed to downpour and drought—no doubt simultaneously—for our fundamental misdeed of being human, all too human. It is meteorology as moralism.

The reduction shows itself in the very shorthand used to frame the discussion. What was once carefully defined research into the specific effects of human activity on the atmosphere has now elided into a three-word mission: stop climate change. Never mind that climate, is by definition, change. Climate is temperature fluctuation over time. Remonstrating us to prevent climate from changing is like ordering us to stop waves from waving.

The deeper and more dangerous language shift is evident in the way the debate has shifted from science to ersatz religiosity. We are frequently challenged to "believe in" global warming, which is a formulation from which we should flee with all possible speed. Earth is getting warmer. Or it isn't. Humanity is contributing to the process. Or it isn't. 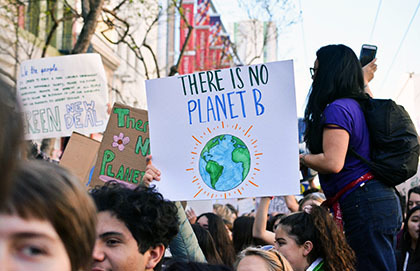 The is-or-isn't outcome resolves itself as fact, on the ground and in the air. And facts, in the old wisdom, are stubborn things. They don't change, as Flannery O'Connor said of the truth, based on your ability to stomach them.

Until facts are facts they are data and are—must be—subject to debate, testing, final proof, not as vehicles for the investment of belief but as part of the sum of all we know. What is in the wind these days, alas, is a redefinition of even material, empirical, scientific knowledge as a matter of democratic consensus. It is what we warned away from in school as the fallacy of an appeal to numbers: everybody knows; most people think; there is general agreement that….Many people know many things. Probability alone says at least a percentage of them might be correct. What everybody knows can never be the basis for a fact, though, as history and arguing with a teenager both demonstrate. Yet the intensity of what George Orwell decades ago derided as group think can have catastrophic consequences for those who insist that an appeal to numbers is no basis for sound science.

In a recent essay in London's The Spectator, David Rose writes about an American climate scientist, Judith Curry, who has been, in her own words "tossed out of the tribe" and labeled "anti-science" for insisting on treating the severity of warming as an uncertain calamity at best. Curry fully accepts that human activity is causing the planet's temperature to rise. She continues to question, however, what the real effect will be over the next century, noting the frequently quoted figure of a two per cent overall increase isn't supported by current data.

"There are so many uncertainties, but the policy people say the target is fixed. And if you question this, you will be slagged off as a denier," she says.

What is troubling comes from Curry's candour that she can continue her inquiries only because she has tenure at the Georgia Institute of Technology. She simply couldn’t take the academic risk if she were at an earlier stage of her career.

"If I were seeking a new job in the U.S. academy, I'd be pretty much unemployable," Curry says. "I can still publish in the peer-reviewed journals. But there's no way I could get a government research grant. I'm doing what I do to stand up for science and to do the right thing."

She can imagine ahead to a time when the frenzy for climate correctness will have subsided, primarily because the apocalypse will have failed to occur as scheduled. But there is reason to hope such equilibrium may come even sooner. On the eve of the Paris climate conference, a group of the world’s economic one per cent, taking the two per cent temperature increase as a given, announced they will apply some of their collective $350 billion in net worth to concrete research projects for clean energy development.

Led by the omnivore philanthropist Bill Gates, and comprising the likes of Mark Zuckerberg, Meg Whitman and Richard Branson, the Breakthrough Energy Coalition will target five key research areas for imaginative alternatives to fossil fuel consumption. In place of political moralizing and mixing science with false-faith religiosity, the Coalition will put its money into making clean energy a fact of life on earth. Whether it will succeed is anyone's guess. But Gates notes the potential economic benefits are massive. And when Bill Gates sees economic benefit, it's worth watching what comes next.

Looking to the new Elections Canada rules that require jumping through hoops just to debate climate change, as well as a Convivium run-in with trying to advertise a story on Facebook, Peter Stockland questions how far our democratic babysitting has gone.

Changing the Meaning of Climate Change

Changing the Climate for Faith and Science

Katharine Hayhoe, one of TIME Magazine’s 100 most influential people in 2014, appreciates both science and faith. Hayhoe states: "I don’t accept global warming on faith: I crunch the data, I analyze the models, I help engineers and city managers and ecologists quantify the impacts."