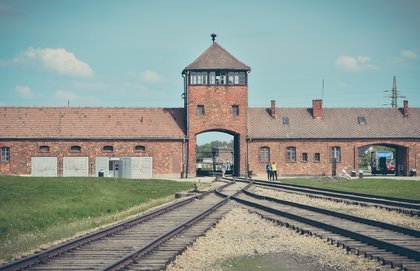 I first met Pinchas Gutter in the middle of the bustling, grey Berlin airport, mid-May 2015. I was exhausted and, amidst the chaos, the only certainty I felt was how far away home was: the comfort zone I’d left there. Pinchas, a Toronto resident and Holocaust survivor, greeted our delegation of Canadian student leaders with his trademark directness.

We were a group of 25 students from across the nation who had gathered to travel across Germany and Poland. We would visit four concentration camps and other sites significant to the Holocaust, under the direction of gifted educators, including Pinchas. But for Pinchas, the sites did not bear just symbolic significance. He was a former resident of the Warsaw ghetto. They were a piece of his past.

I shyly kept my distance from Pinchas for the first several days of the trip, eagerly soaking up his wisdom but unsure how to approach this man whose direct questions I often stuttered to answer. The group passed through Berlin and visited the Reichstag, Bayerischer Platz (a former Jewish neighbourhood), the Grunewald train station, and made our way through the perspective-bending Memorial to the Murdered Jews of Europe.

It was not until we made our way to Poland that I first connected with Pinchas in a more personal way. As we made our way past the German state line and entered the Polish countryside through its derelict highway, Pinchas seemed to open up into both himself and the expanse of his personal story.

Our first stop in Poland was Oswiecim, where we crammed into the benches of an old restored synagogue. Oswiecim was once a city known for its hospitality, but now it’s considered synonymous with Auschwitz-Birkenau, where an estimated 1.5 million people died in the Holocaust. I surveyed the synagogue’s vaulted ceilings and tried to reconcile the beauty of this place of worship with the horrors of the camp I was about to encounter down the road. Then, a note broke through my interior struggle. Peering around one of my tall classmates, I caught sight of Pinchas, eyes shut, voice rising to the heavens. A cantor since he was a boy, Pinchas’ voice rose in haunting Hebrew towards the vaulted ceilings. His answer to this in-between space: prayer.

He opened his eyes.

“Sing with me,” he urged us students.

We looked around, almost none of us in possession of the Hebrew needed to join in. In spite of myself, I joined along, the words and phrasing coming to me sooner than seemed possible. Kierkegaard once said that “prayer is as necessary as breathing,” and I found myself wondering if, perhaps, the same was not true of music as well.

A cantor since he was a boy, Pinchas’ voice rose in haunting Hebrew towards the vaulted ceilings. His answer to this in-between space: prayer.
Related Stories

The York University Question: It's not about sex—it's about the law
The Prairies and a Theology of Brokenness
Getting to Know the Media Nun

“You can sing,” the program organizer exclaimed, looking straight at me.

Pinchas smiled. So did I, albeit a little unsurely. I could count on one hand the number of times I had sung in front of people since high school, and I hadn’t planned to start again now, especially in front of a large group of strangers.

Hours later, I found myself in a circle in the back woods of Birkenau, starting at the expanse of the camp from its rear. The trees swayed in the wind and an oppressive sense of calm belied the fact that countless horrors had taken place in this very place within the lifetime of the man standing in front of me. Prayers were said and Pinchas sang another song. I heard my name: “And now Hannah will sing Amazing Grace for us.”

And so, for the first time as an adult, I heard my own voice rise, alone over the wind in the trees, a prayer in my own words, to my own God. “I once was lost but now I'm found. Was blind but now I see.'Twas grace that taught my heart to fear. And grace my fears relieved. How precious did that grace appear…”

Later that night, we gathered around the table as Pinchas sang to bless Shabbat dinner. I wrote in my journal after, "'Hiney mah-tov umah-na'im, shevet achim gam yachad.//How good and sweet it is when people dwell together in harmony.' (Psalm 133)."

We spent all morning at Auschwitz and all afternoon at Birkenau. And then that night, after tears and questions and silence, we gathered together to mark Shabbat. The challah broken, the prayers sung, the candles lit. God still with us, peace still possible, and shalom still present.

From that day on, I stuck close to Pinchas’ side. Leonard Cohen sang of “the tower of song,” Pinchas seemed to have his own suite in that tower. He sang everywhere he went. In synagogues, for Shabbat dinner, lullabies, in line for the bus, even as a wake up alarm to all those of us who had snatched the opportunity to catch a few minutes of sleep on one of the many 14-hour drives along the bumpy Polish highways. More often than not, I sang along – prayers for dinner, songs from his childhood, even a Yiddish tune or two, almost all in a language I didn’t understand.

Music was the way Pinchas met the world. It was in his soul, and it pervaded each space and memory I have of those 10 days.

Music was the way Pinchas met the world. It was in his soul, and it pervaded each space and memory I have of those 10 days. The day before we were to leave to return to Canada, we visited the concentration camp Majdanek.

Almost intact and located in an open field rife with wind tunnels, the sense of oppression was almost palpable. At the very end of the camp stands an enormous circular structure reaching to the sky. This monument, containing 70 tons of human ash and bones left behind as a ghoulish legacy of the atrocities carried out some 75 years earlier, often shocks visitors into silence. I was no exception. I clutched Pinchas’ hand. The breath left my body. I will always remember his voice rising to the sky, uttering the Kaddish – the prayer for the dead – in the place in which I found it the most difficult to pray, the notes rising above the muttered prayers of my fellow students.

I returned to those same places this year, but this time without Pinchas, who had chosen to accompany another group on their trip. I found myself once again at Majdenack and Treblinka, but this time without my companion of song. As I saw the same questions and loss of voice in the faces of my own students, I heard my name once again. One of my students had taken hold of my hand.

“Can you sing?” she asked. And so I thought of Pinchas and took a deep breath.

“Amazing grace how sweet the sound…”