Dreher’s work has become a conversation kick-starter by proposing Western Christians seek communities that are modern emulations of the Benedictine monastic response to Rome’s collapse in the Sixth Century.

O’Brien’s counterpoint that Christians are called to endure in the world as it is has, in turn, drawn thoughtful affirmation from these Convivium readers.

John Zucchi, a professor of history at McGill University in Montreal and the Responsible in Canada for the world wide lay Catholic movement Communion and Liberation, approves of O’Brien’s critique because it listening to God’s call rather than over-relying on human strategizing:

“I especially appreciate John O’Brien’s point that (Saint) Benedict’s withdrawal was not a tactical response. Here, I think, lies the error of so many Christian, and particularly Catholic, responses to the present crisis:  the belief and hope that specific plans, programs and tactics will bring about change.

Even in the best-intentioned individuals or groups, such an approach is always tainted by Pelagianism, and ever so subtly comes to rely on human effort and not, ultimately, on the Mystery of God operating in the world.

If our world is to be “saved” in the deepest sense (that is, to recover a meaning), it will come about as a kind of by-product of people pursuing the path on which Christ calls them.  It is from this vocation that they engage with the world in a different way, what the Gospel calls witness.

Not a tactic, not a program ( and God knows we have far too many of these in dioceses, parishes and movements)  but a different way of being that attracts perhaps two or three individuals – not a crowd – who in turn will be witnesses to what they have met.

As O’Brian rightly argues, this should give us hope that enough Christians have been, and will continue to be, apostles with boundless zeal. Look at the many wonderful saints who give us examples of lives lived by virtue!

The whole history of Christianity shows that it is this dynamic of witness, and not any tactics, that has changed the world.

For Anna Farrow, executive director of the English Speaking Catholic Council, it is difficult to be critical of Dreher’s deeply personal angst over the fate of families in times such as ours. But O’Brien, she says, gets it right when he corrects Dreher’s error in relying on only one saint – Saint Benedict – rather than on the communion of saints that is essential to the faith of all Creedal Christians. Farrow writes:

“In 2006, Rod Dreher was received into the Orthodox Church.  He says that he came to Orthodoxy a ‘broken man’ and that he sought there what he had first thought he had found in the Catholic Church, ‘a rock of stability in a turbulent sea of relativism and modernism overtaking Western Christianity.’

His faith in the ability of the Roman Church to withstand militant secularism was profoundly shaken by the sexual abuse crisis.

In reading The Benedict Option, it seems that Dreher is still seeking that ‘rock of stability.”’ I have sympathy for him. 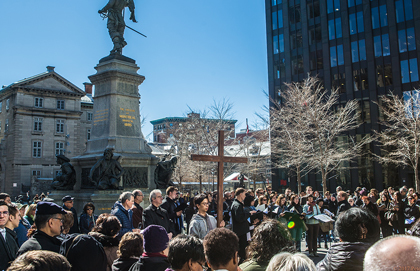 Driving him to seek a safer port was, I believe, a deep angst as to how he was to raise his children in the faith, and that is a question with which every Christian mother and father must wrestle.

But does the perilous, cultural and spiritual landscape in which we find ourselves fatally compromise our ability to nurture faith in our children?  Could it not be that the more hostile society is towards the eternal truths, the greater our capacity to demonstrate to our children the value in a life dedicated to good, the beautiful and the true?  And has there been a time when Christians were not confronted with the profound challenges of living with families, Church and society in crisis?

Pilate’s question to Jesus, which we heard again during the reading of the Passion this past Holy Week, is the cry of relativism from the beginning of time, “What is truth?”

The lives of the saints are the answer to that question worked out in crucibles of persecution or indifference. John O’Brien’s SJ’s reflection on Dreher’s book strikes to the heart of the issue when he suggests that each of us is required to seek the Lord’s will for how we should live, and we should expect that the answer will be particular to our individual gifts and circumstances.

There is no universal “option” or program, and to look for one is perhaps a distraction from taking the rocky and perilous path that the Lord has marked out for us.

A graduate of Calvin Theological College with a doctorate from McGill, and an expert on consecrated life in Canada, Jason Zuidema appreciates O’Brien’s review for pointing out that the Dreher book doesn’t seem to get even the basics of Benedictine monasticism right:

"John O'Brien is right to point out that though Dreher's Benedict Option is a conversation starter, but it has a weak reading of history and is ambiguous, in the end, on the work of Christians in contemporary society.

No doubt, books on simplicity, chastity, discipline, honesty, hard work, purity, etc. are welcome. There is always room for engaging books on living the Christian virtues. However, the most unconvincing part of this book is, in fact, the connection to Benedict.

In my reading, evoking Benedictine monasticism is simply a hook that helps organize the material in the book. I am not sure it added anything of substance to the argument that couldn't have been done equally well by making an example of some other Christian community or tradition: The Puritan Option, The Mount Athos Option, The Jesuit Option, The Bonhoeffer Option, The Chinese Underground Church Option, etc.

O'Brien helpfully reminds us that Benedictine monasticism itself had varying relationships to society: Benedict seems quite different from subsequent Benedictine monks, let alone the opinions of the whole variety of other monastic and religious communities."

A different view of Dreher’s argument comes from Thana Cristina de Campos, an adjunct law professor at the University of Ottawa who is also a lay Carmelite. While she agrees with John O’Brien’s Jesuit perspective on the necessity of apostolic works, she cautions against underestimating the power of contemplative life has to transform the world.

Rod Dreher argues for the need to build resilient local Christian communities, within which intellectual and moral virtues can be cultivated, strengthened and then more effectively used to 'fight the good fight'. This is what he calls The Benedict Option. His argument builds on both Alasdair MacIntyre's and Benedict XVI's teachings, which had both highlighted the power of Christian virtues and Catholicism in all its intellectual and cultural richness to fight moral relativism.

In the review, O'Brien argues that Dreher's apocalyptic tone is unhelpful because it confuses rather than clarifies what Christians should do to in the face of the current culture war. Dreher calls for a withdrawal from mainstream culture. O'Brien questions such withdrawal as a solution by emphasizing that even St. Benedict -- a hermit -- did not remain hidden for too long, and soon started his apostolic work of teaching the faith to local shepherds.

These fruits are indeed evidence that Christianity is alive and strong. As O’Brian rightly argues, this should give us hope that enough Christians have been, and will continue to be, apostles with boundless zeal. Look at the many wonderful saints who give us examples of lives lived by virtue!

But that should not lead to the conclusion that the hidden and quiet prayer – particularly the prayer of cloistered religious communities, which purportedly produces no visible or commensurable results that would serve as evidence -- should be dismissed.

As a Carmelite who lives and prays in the world, I have learned to revere the fundamental role that secluded, unseen, quiet, and unheard religious communities have in the current culture war. If we need 10,000 soldiers fighting in the battlefields, we certainly need 10,000 prayer warriors who will sustain those soldiers.

Convivium is publishing these short commentaries above because of their intelligent contribution to the conversation around Rod Dreher’s book. Even more, we publish them because they make the conversation itself possible and evident.

Convivium is about living together in an environment of convivial exchange. In that spirit we invite all our readers to let us know their thoughts on the specific issue of how people of faith – all faiths - can best live in a world frequently hostile to spiritual belief. We also welcome submissions on any topic that touches on faith in the common life of Canadians. We cannot guarantee publication of everything we receive but we do commit to publishing what we can.

Publisher Peter Stockland reflects on the "why" behind the annual Stations of the Cross tradition he participates in each year in downtown Montreal, Quebec. He asks readers to consider the value of a community and the depth of our belief in the one who gave us His all on the cross.

John D. O’Brien, S.J. reviews Rod Dreher’s The Benedict Option citing its value in igniting conversation, observing also the ways in which Christians might at once be different from and love the world at the very same time.