It is an unforgettable experience to visit St. Joseph's Oratory in Montreal. Crowds that would be anonymous in the city below are now pilgrims, united in a purpose that makes them the people of God.  On human faces, the colours of every race are seen, and many languages heard.  The impression conveyed is one of a worldwide pilgrimage to the largest shrine in the world dedicated to Joseph, who for Christians is the foster-father of the Son of God. Never is this experience more vivid than on Sunday, the Christian Sabbath, when we honour God’s gift of rest.

Rabbi Abraham Joshua Heschel once wrote that the Sabbath is the great cathedral of the Jewish people. As a cathedral occupies space, the Sabbath occupies time. A city without necessary time to worship God produces a dull and grey landscape, industrial, cold, and lifeless.  A culture without cathedrals of time, the weekly Sabbath, becomes hyperactive and exhausted, over-stimulated and bored, constantly consuming and never satisfied, anxious, addicted, and depressed.

It resembles spiritually what a physical city looks like without churches, temples or other places of worship. Think of Nowa Huta, the Polish “worker’s paradise” outside Krakow, designed by atheistic communists to be a town without a church, an egregious omission finally corrected by the building of a church under the episcopacy of Cardinal Wojtyla, now better known as Saint John Paul II.

But we need not go to Europe to witness the loss first-hand. We can see it in our Canadian cities, towns and as our "cathedral of time," the Sabbath rest, disappears from our lives. We need to re-discover the gift and discipline of the Sabbath, along with the healing power of time as a wide-open expanse, with ample room for us to move about and breathe freely.

Sundays at St. Joseph's Oratory offer just a gift and a glimpse of what the world could be if only we made different choices.  We could, if we chose, carry away the grace of the Oratory, the time to enjoy majesty of the mountain, the sublimity of the architecture, the security of the space. How?  By choosing to go to Church and observe the Sabbath, and fill our houses with visible reminders of the presence of God.

As with all great shrines, though the main purpose is worship, the Oratory also offers a total experience, an immersion of all the senses, a re-creation and restoration for body and soul.  On Sundays, families with children have time to relax and enjoy life together.  There's so much to capture the imagination of children: they can light a candle in the votive chapel, visit the original chapel where Brother André lived upstairs and slept on the floor, wander through the gardens of the Stations of the Cross, marvel at the wax museum of the life of Joseph, contemplate manger scenes from all over the world in the crèche museum, stand wide-eyed under the immense dome of the upper basilica, admire the view from the look-out, and so on.

I recall, in one of my former parishes, how we used to organize a day-pilgrimage to the Oratory for grade six students.  The visit profoundly affected them, implanting a clear, distinct, and life-long memory. Of what, exactly?  I don't think any of them remember my homily at Mass, nor the historical details related by the tour guide.  The building itself communicates a presence in the world, and in silence speaks volumes.

There is a God.  There is no doubt about it.  Architecture of such sublime grandeur and splendour could be built in God's honour only if He really does exist. The Oratory structure is inspired by the Italian Renaissance. The dome is reminiscent of Il Duomo in Florence, evoking a sense of one of the great churches of Europe, right here in a country of lakes and forests.

This is not an intellectual argument, but a bodily experience, the deep truth beyond words that was communicated to the students, of the majesty and transcendence of God.

This is not an intellectual argument, but a bodily experience, the deep truth beyond words that was communicated to the students, of the majesty and transcendence of God.

We need public monuments, buildings, and external symbols to remind us that God is not only a Presence hidden in the depths of every human soul, but also a Presence that transcends us, that fills the universe, that overshadows, protects and embraces us, like Jesus standing on the Mount of Olives overlooking the city of Jerusalem, expressing his desire to embrace all the inhabitants: "How I longed to gather you as a mother bird gathers her chicks under her wings!" 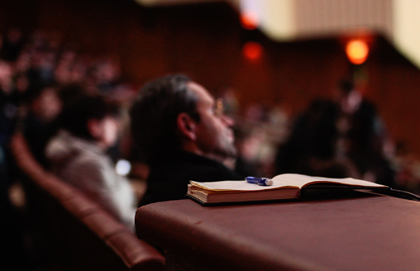 We need the conviction, expressed externally, that God somehow watches over our city and our country.  Brazil has the towering figure of Christ the Saviour on a mountain overlooking the city of Rio.  Canada has St. Joseph's Oratory on Mount Royal, watching over the city of Montreal.

In our current cultural environment, we often hear of the push for "safe spaces" where people from a diversity of races or sexual orientations will feel safe, respected, and protected from harassment.  Leaving aside the politically correct genesis of this demand, as well as its illogical excesses, the desire for safe spaces expresses a deep human need to feel protected from danger and embraced by love.

To put it simply, either the entire universe is a safe space, or it is not.  Faith in God is the ultimate assurance of a congenial universe, that despite all the trials and turmoil of life, despite even death, we are always "safe" because we are in the hands of our Father, sustained by His loving embrace.  Saint Joseph's Oratory is one privileged safe space that reminds us of the nature of the universe.

From the Jewish Temple to medieval cathedrals to modern ecclesial construction in touch with tradition, Church architecture has always striven to represent the world in miniature.  High ceilings, either neo-classical, Romanesque or Gothic, always evoke the heights of heaven and the transcendence of God, but the enclosed structure also conveys a sense of God's immanence and intimacy: His presence in an edifice of human proportions.

In addition to the initial impact of the architecture, the visceral appeal of the Oratory is Mount Royal itself.  In every religious tradition, mountains are associated with sacred places, simply because they are elevated and closer to the heavens.  A mountain top view is always spectacular, as a vast panorama is laid out at our feet for our contemplation, and communicates to us a primal sense of exaltation.

The streets of Montreal may be dirty and filled with potholes, but on the mountain lookout at St. Joseph's, as you gaze at the sun setting in the western sky, suffusing the buildings below with a soft glow in warm, golden hues, almost as a heavenly benediction, Montreal could be the most beautiful city in the world! (The same could be said of the great country that surrounds us, first dedicated to St Joseph in 1624 by the early Recollect missionaries).

The mountain and the dome communicate a sense of God's sublime majesty and transcendence.  In general, the beauty of nature and architecture can convey the sense of a "Presence" but not necessarily of a "Person."  St. Joseph's Oratory is also filled with personal representations of Joseph and the child Jesus.  Why is this significant?  It goes far beyond private Catholic devotion.

We live in a visual and virtual age, and we human beings are in many ways more influenced by imagination than intellect.  We need images of God.   Who can picture Christmas without a crèche, without a visible representation of the child Jesus with Mary and Joseph in the manger?  And who can understand the depths of Christ's love apart from the image of Jesus on the Cross?  What of God the Father?

Whether we like it or not, from childhood we have a picture in our subconscious of what He is like.  It is often an ugly distortion of a disciplinarian, a tyrant, a critic, a judge, and so on.  In other words, it is nothing like the truth: the God and Father of Jesus Christ. St. Joseph is not an "exact representation of the Father's being," as the letter to the Hebrews describes Jesus, but Joseph is a better image of fatherhood than any earthly father, chosen by God the Father Himself to represent His Fatherhood to the child Jesus.

A crucial experience for pilgrims at the Oratory is the subliminal effect of contemplating images of Joseph holding the child Jesus.  A picture, statue or other work of art speaks a thousand words.  The first sight for pilgrims passing through the main entrance on Queen Mary Road is a nine-foot granite statue of Joseph with the Child Jesus in his arms.  Here is an image of a loving father, the earthly father of Jesus, who holds Him to his heart and offers Him to the world, in the manner of God the Father.

In the heart of the Oratory, in the Crypt Church, stands a white Carrera marble statue by Giacomini, which was installed in 1917.  Exuding a near-mystical sense, it is another representation of Joseph and the Child Jesus. In the hallway outside of the votive chapel shines a smaller, more intimate statue on the same theme, before which burns a flame fed by "St. Joseph's oil," made famous through Brother André and many miraculous cures.  Even if the impact of these images of a loving father may not consciously register in the minds of passing pilgrims, there is a cumulative effect on the imagination, pre-disposing the heart to receive the deeper revelation of God as our loving Father.

The grace communicated by the mountain, the dome and the images of Joseph and the Child Jesus is not like an injection producing an instant high.  Rather, it affects our souls like a gentle rain from heaven that slowly waters the earth.  It takes time.  Pilgrims should not be in a rush.  The attitude of the consumer-tourist would be completely self-defeating.   Sunday is the most popular day at the Oratory, but whatever the day, a visit to St. Joseph's -- as with any pilgrimage site or any Church at all -- should be an occasion of Sabbath worship, rest, and relaxation.

Father Tim McCauley is a priest at St. Patrick’s Basilica in Ottawa.

Jessica Walters, co-founder of  the magazine Vigil, brings us a beautiful reflection on the marking of Ordinary Time as a part of our Cross Canada Convivium series.