So, the Chief Electoral Officer has spoken, and Canada's next election will take place as scheduled, on October 21, 2019.

Thus has ended the drama surrounding the date of the coming Federal election. The drama was widely reported as a source of conflict, but it might possibly represent something quite different, and even inspiring.

Stephane Perrault, Canada's Chief Electoral Officer, was directed by the Federal Court to take a second look at the voting date, after an application for judicial review that was filed by Chani Aryeh-Bain, a candidate in the Toronto riding of Eglinton-Lawrence, and Ira Walfish, a voter in York Centre. I have made no mention of which party Aryeh-Bain is representing in the coming election, as that is not relevant to the issue.

What is relevant, and eminently Canadian (as in very nice), is that one of her opponents actually sided with her in this matter. This is not a party or partisan matter; at least it should not be.

What exactly is the point of contention? October 21 this year is the Jewish Holy Day of Shemini Atzeret (Eighth Day of Solemn Assembly), the culmination of the holy period of Sukkot (Tabernacles). It is not one of the better known Jewish Holy Days, but it is quite important in the Jewish calendar.

A holy day such as Shemini Atzeret carries with it a host of restrictions, much like the Sabbath in many but not all respects. These include prohibitions of writing and driving as well as the use of electronic devices, making it impossible for Jews to vote on that day. The alternative voting days are likewise not ideal, for various reasons, including that many are on days that pose similar and significant challenges to Jewish religious observance. Two of the four advance voting days, held a week before the election on Friday, Saturday, Sunday and Monday, are dates when religious Jews would not be able to vote.

For Aryeh-Bain herself, there is an additional vital concern. As a candidate, because of her religious belief and practice, she will not be able to campaign on election day, putting her at a distinct disadvantage. She also will not be able to ask anyone to do anything on her behalf that she herself cannot do, such as phoning, e-mailing or texting, or driving electors to the polling stations – things that all candidates typically engage in on election day.

The Federal Court asked the Chief Electoral Officer to review his decision to reject the call to recommend to Cabinet a change of the election date, with a specific directive to balance the election law against the infringement on the Charter rights of affected voters, who undoubtedly number in the tens of thousands. The fact that the Federal Court reacted as it did is quite an important statement regarding the issue itself. The Court was thereby affirming that this is not a frivolous matter, that instead it is quite serious, and merits a sober second look.

The alternative voting days are likewise not ideal, for various reasons, including that many are on days that pose similar and significant challenges to Jewish religious observance. 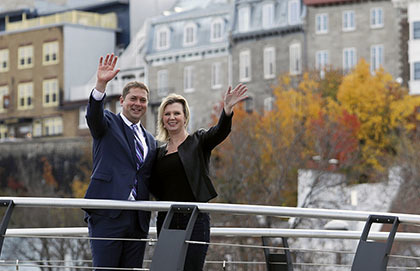 Perrault, at the Court's behest, weighed the impact on observant Jews and his mandate "to ensure accessible voting opportunities for all Canadians." He concluded that it would not be in the public interest to reschedule the fixed election date. He stated that "when considering the entirety of my statutory mandate, and especially at this time in the electoral calendar...it is not in the public interest for me to recommend a change to the date of the general election."

In other words, if I read this correctly, the plaintiffs in this case have a strong case, and in fact the October 21 election date is not fair to many Canadians, but it is too late to change the date of the election, as it would cause more problems than it would solve.

It points, at once, to the legitimacy of the challenge brought by Chani Aryeh-Bain and Ira Walfish, and to the Canadian sensitivity to the rights of all Canadians. We should take pride in that.

And if you are looking for more reasons to be proud, I highly recommend reading the entirety of Stephane Perrault's rationale for his decision. It is available on the Elections Canada website. It is a lengthy document of more than eight full pages, in which the Chief Electoral Officer documents the massive effort that goes into holding an election, and most respectfully addresses the points of Chani Aryeh-Bain and Ira Walfish.

Just learning what is involved in assuring a viable election process, with a staggering amount of work, over a long period of time, and employing a temporary workforce of 300,000 people (you read that correctly - three-hundred thousand people!) in more than 16,000 locations (16,134 to be exact), is worth the read. Figuring out which locations are accessible for most voters, and having leasing agreements for all these sites is not small potatoes. Having to re-do all this in a three-month period, including having schools re-schedule their PD days to accommodate a new election date, is not impossible, but it is surely a Herculean task.

So, too, is it worthwhile to learn how seriously Mr. Perrault has taken this matter. He was already aware about a year ago of the Shemini Atzeret issue but was assured by members of the Jewish community (no names mentioned by him) that the religious constraints could be overcome through outreach and alternate voting options. There was a precedent for this : the 2008 general election, which coincided with one of the Holy Days during the Sukkot period.

When the present challenge came to the fore, Mr. Perrault, in pursuing the matter, found out that only two of the school boards across the country that had established October 21 as a PD day – thereby making the schools available as polling stations – were willing to change the PD day to October 28, the proposed alternative date for the election. Climbing that mountain of finding new places would have been an almost insurmountable challenge.

In his long presentation, Mr. Perrault lists nine alternate options for voting that are not compromised by the Shemini Atzeret matter. In addition, he writes that "It is my opinion that Elections Canada can fulfill its mandate of ensuring a genuine opportunity for observant Jewish electors to participate in the electoral process by providing them with, and informing them about, the opportunities to vote ahead of election day." Our Chief Electoral Officer actually commits to devising a plan for these electors to vote at advance polls and by way of special ballot.

In  punctuating his decision, Mr. Perrault states that "This is not a decision that I make lightly, but with a view to providing the broadest possible range of accessible voting services to the population at large...I am committed to continuing to work with the Jewish community to maximize voting options within the existing calendar in ways that are convenient and consistent with their religious beliefs."

It is quite inspiring to read this document, and to appreciate how fortunate we are to have such a sensitive and caring Chief Electoral Officer.

In the end, there are no losers in this case. The Federal Court acted with true concern. The Chief Electoral Officer came through as a responsible and responsive public servant. The candidate who brought the action shone forth as a deeply religious person committed to serving our country and at the same time not compromising one iota on her religious principles. That is such a laudable example.

And the big winner is Canada and all its citizens. How fortunate we are that all this can unfold with such dignity, respect, sensitivity, and wisdom.

Too Soon To Despair For Andrew Scheer

Convivium’s Rebecca Darwent argues that, attacks from his political and media enemies withstanding, Canadians haven’t rejected the federal Conservative leader because of his religious faith.