“There were a number of students (online), and the teacher asked ‘Do any of you have questions for me? Is there any help you need with your work?’ The answer was no. They had their schoolwork under control. But they were there because what they wanted was a sense of community,” Verburg says.

He tells the anecdote with satisfaction at the students being diligent. Even more, however, it reflects the “beyond academics” lesson Christian schools across the province make it their mission to instill. Schoolwork is essential. Community is vital. Vital, that is, in the literal sense of being indispensable to the life of the spirit each school seeks to inculcate.

In the aftermath of the province-wide school closure edict last March, Christian school educators say they recognized sustaining that key part of their identity presented a far greater challenge than overcoming technological and scheduling issues. Indeed, Verburg says, Community Christian was already pretty well-advanced on the logistical side pre-COVID crisis, having created a system of shareable electronic portfolios for students and purchased more than 50 laptops for the 100-student rural school.

“I was a bit worried at first, but access to technology doesn’t seem to have been a barrier for us,” he says. “I asked the students last week if they liked learning at home and the answer came back very strongly that they did. The piece they did not like was missing their friends. They wanted to come back to school to be part of the social interaction here.”

Verburg has modeled overcoming that dislocation by adapting an online version of something he does every day during the normal academic year: meeting each student at the school’s front door to say good morning. Now, he’s set up a Zoom block for the same time each day so students can sign on, say hello, catch up, ask questions, then sign off to go about their work.

“It’s a really important practice because it says to them that they are people who belong to our school. That message has to be reinforced,” he says.

The reinforcement functions at the much deeper level of a question Verburg and the Community Christian board were wrestling with when he and I spoke. It was the issue of whether or not to give students a final grade for the interrupted year. There was, he said, a serious question of equity because not every student in the school community has the same learning conditions in their family lives.

“At home, everybody’s circumstances will be different, as opposed to a classroom where you’re all there together. How do you measure (learning progress) when one family might be able to provide four hours of help to a student, and another family might have only 30 minutes to give?”

Pressures of time undermining fairness and community have also been on Grade Seven teacher Carla Alblas’ mind at Providence Christian School in Dundas Ontario as she and her students seek to overcome COVID-19 lock-down obstacles. In their case, it’s the impediment to their annual outreach project. Each year, Alblas’ students spend four to five months meeting, getting to know, and interviewing residents of a nearby retirement village. 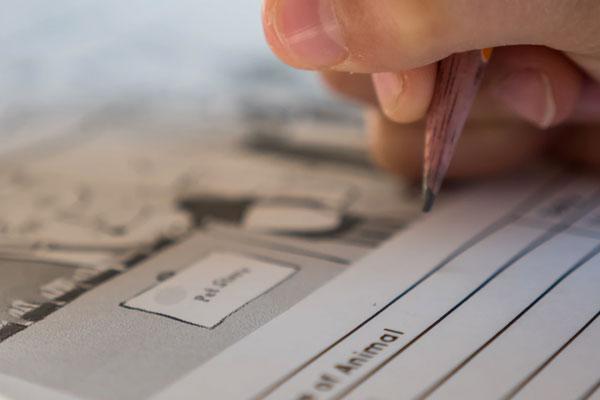 Over the course of four visits, they talk to members of the older generation about childhood, school years, adult life, and their current lives. The students then transcribe the interview, write, and illustrate a biography for each resident, then publish the results as a book, which is presented to as a gift.

“We were about three-quarters of the way through when the school shut down. The first thing the kids asked about when we (went online) was how they could finish it. They really cared about the work, but they cared even more about the people they met. They’re concerned about them staying healthy.”

At Easter, the students all wrote letters to “their residents” and had them e-mailed to the director of activities at the retirement home, who read them out loud to their intended recipients.

“The kids were so eager to finish that I finally drove down to the residence and handed (the director) my iPad so she could record the last parts of the interviews. Now, they’re working on them from home. Obviously, having to improvise, it’s taken longer than it normally would. But they’re so driven by how much they care for the people in the nursing home. We will have (the projects) delivered. We’ll have our celebration in the fall if we have to.”

Alblas says the challenge has underscored a paradoxical upside of social isolation: the way in which distancing fosters community togetherness. For staff and students alike, she notes, the lock-down has opened up connections forged by having to overcome the obstacles of being apart. Bonds of community are strengthened by the spirit of bridging separation.

“We’re further apart from each other, but we also have a deeper sense of being in each other’s courts, of having each other’s backs,” she says. There’s a sense learning is happening in a way that makes sure we all know we care about each other, that we’re going to be okay, we’re going to get through this, and we will be together again.”

For Jean-Daniel Lussier, principal of Trinity Christian School in Burlington, the weeks since the forced closures in March have brought into sharp relief the full meaning of relationship within community. In fact, Lussier says, the lock-down has actually been an opportunity to widen community through the very technology that allows Trinity Christian to interact as a school.

Every Thursday, Trinity holds an online chapel at 9 a.m. Not everyone can log in then, so the link remains available on the web. Normally, the chapel would get 75 to 100 views. On average now, it’s getting 600 to 700 views. Through it, Lussier reconnected with someone he hadn’t been in contact with for ages.

“It’s created that kind of extended community beyond just our own students and their families. It’s such a blessing to see,” he says.

The COVID-19 crisis has unquestionably caused “rupture” in our personal and social sense of relationship, Lussier says, but that opens the opportunity to restore it with the sense of community at the heart of Christian schools.

“The relationship piece is ultimately the piece that people want most to re-create. Absolutely (students) want to continue with their academic work. But at the end of the day, if the relationship isn’t there, it ends up being quite hollow. Community becomes more tangible in hard times.”

That’s why great care will need to be taken, he adds, in “fostering the environment of care” that students return to in the fall. Having made the transition to learning on their own, students will need to be guided through the emotions of the re-transition to within a bricks and mortar school structure.

“We’ve already started the conversation about how we can continue to support our students and think about whether there are things we’ve learned in terms of community that we could be doing even better.”

At Drayton’s Community Christian School, Raymond Verburg concurs. He goes further, using the word “trauma” to describe what some students may manifest when it’s time to return at the end of the summer. He’s considering a “town hall” to get a public sense of where staff, students and parents are when the new academic year starts. He also cautions that “community” means respectful awareness that trauma comes in different forms just as crises such as the COVID pandemic affect individuals in various ways.

This is the final of Peter Stockland's series on how some Ontario independent schools succeeded in the face of the COVID-19 pandemic. Read the first part of the series on policy recommendations to strengthen Ontario's education for all students.

Between hurdles such as rural Internet issues, emotional needs, and kids being kids, Northumberland Christian School has discovered that the path to teaching remotely relies heavily on the community they've always valued, reports Peter Stockland.

As Cardus partners with the global organization EduDeo to add a prize for Excellence in Global Perspective Teaching to its annual John Rozema Teacher Excellence Awards, Education Program Director Beth Green asks veteran educators Diane Stronks and Elco Vandergrift about the difference Christian love can make in the world’s classrooms.