"Have you reason to be angry over the plant?" God asks Jonah. (The plant had sheltered Jonah, but then God sent a worm that attacked the plant so that it withered).

"I have reason to be angry," Jonah answers, "angry enough to die."

His response always baffled me.  How could he be so angry over something so inconsequential, embittered to the point of wanting to die?  The answer sheds light on our culture's drift toward euthanasia.

Underneath the argument for "mercy killing" in Canada and other countries, and deeper than any desire to escape suffering, is our desperate human wrestling with a Power greater than ourselves.  At issue is our image of God: is there an impersonal Power that causes our suffering and death, or a loving Person who permits weakness and helplessness for our greater good?  Our perception will affect the depth of our anger in response to the injustices of life.  Our subsequent decision to either cultivate that anger into hatred, or dissolve it through forgiveness, will express our choice, accumulated and solidified over a lifetime, between love or power, life or death.

So much of what we suffer as innocent children we can choose to hold on to as responsible adults.  Or we can forgive.  Imagine a child wounded by parental neglect or mistreatment, who grows us believing the lie that he or she has no inherent worth or dignity.  Depending on personality, one child might react to this injustice with anger, violence, and anti-social behaviour.  Another might feel like a helpless victim, with no choice but to roll up in a corner and die, to escape the pain of being unloved.  Victims can learn to identify with their abusers and abandon their own souls.  Interiorly, it is a tug of war, a battle between life and death.  Will we put our anger at the service of our true self, to defend our human dignity?  Or will we identify with our oppressor, and direct our anger inward, blaming ourselves for being rejected, punishing ourselves for not being good enough?  If we do not know there is a God of love, mercy and justice to whom we can appeal, we can despair.  Is a person to blame?

But it is frightfully easy to misread suffering.  For Christians, it is an invitation to union with Christ. But those of other faiths, and even for Christians themselves, can misinterpret it as meaningless punishment of a vindictive God.  It is natural to be angry, even infuriated, at being the victim of unmerited punishment.  We could despise the One who inflicts it.

Interiorly, it is a tug of war, a battle between life and death. Will we put our anger at the service of our true self, to defend our human dignity?
Related Stories 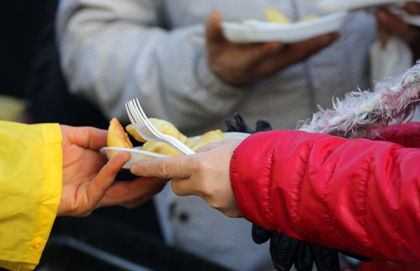 Euthanasia can be the refusal to submit to what is seen as unjust punishment.   If our inner image of God is so horribly scarred as to be unrecognizable -- a loving Father mutated into a diabolical sadist -- then we may want to deprive him of his perverted pleasure of torturing us by eliminating ourselves; we can even think that we are protecting ourselves from further abuse by dispatching ourselves to the grave.

We are ultimately responsible, at least as adults, for our anger and our distorted image of God, for what we choose to believe about Him.  Why would anyone want to believe horrible lies about God?  As children, if we were mistreated or neglected by our parents, we can understand growing up with a warped view of God, and end up being angry at Him.  But hanging on to hatred for a lifetime?  We are responsible.  Why would we cling to it?  Because of our weakness and our wounds, yes, but also because of our pride and our desire for power.

We need to pray for wisdom to discern the times in which we live, and the spiritual atmosphere we are breathing, one now thick with anger, even hatred.  Perhaps it was always there, in the heart of darkness of fallen humanity.  However, civilizational restraints, the habit of virtue and the grace of God kept the flood at bay.  But when the levee breaks, watch out.  During recent American political debates, pent-up hostility and bitterness were unleashed, with an influence felt far beyond American borders.  How long has this subterranean anger been lying there in wait?

In the aftermath of the cataclysm of World War II, Romano Guardini gave lectures that were later published in a book The End of the Modern World, which includes a chapter entitled "Power and Responsibility."  He remarks that the challenge of the modern world will be to curb the use of power.  The atomic bomb is the prime example of our technological power to annihilate ourselves, while the Holocaust is the most terrifying instance of how human nature can be corrupted and possessed by the diabolical power of all-consuming hatred.  Several Nazis, most notably their leader, once they had vented their fury on others, finally directed their hatred at themselves by committing suicide.  We are witnessing a similar dark drama played out in our times, as it is becoming evident that our civilization has not sufficiently recovered from the trauma of the twentieth century.  The violence of World War II slipped underground for two decades, and then emerged again in the sexual revolution, culminating in the taking of life by abortion.  Now the rotten fruit is fully ripened as we turn these self-destructive tendencies against ourselves in the form of euthanasia.

At the same time that Guardini was writing from a philosophical perspective, another author was incarnating his theology in metaphor and allegory -- J. R. R. Tolkien in The Lord of the Rings.  We should not underestimate the genius of his mytho-poetic vision simply because he composed "stories" instead of writing philosophy.  Jesus told parables.  In his epic, Tolkien demonstrates that ultimate power cannot be grasped or wielded by human beings, because it will consume us.  We must renounce this power.  The Ring of Power must be cast into Mount Doom.  Such self-abnegation follows the example of God Himself in the life and teaching of Jesus Christ.  St. Paul writes that Christ Crucified is the power and wisdom of God. Christ emptied himself of power in order to show love, a lesson particularly relevant to our times.

In many ways life is a choice between power or love.  If I am angry but want to love and be loved, I forgive.  If I am angry and refuse to forgive, I am choosing power over love.  In loving, we must accept a measure of powerlessness and vulnerability, understanding that the capacity to love includes the possibility of being hurt.   One of the most agonizing and annihilating feelings is that of being alone, rejected, abandoned, unloved.  In response, some people end up closing their hearts to both pain and love.  They opt for strength, security, and protection, independence and self-sufficiency.  Without fully realizing what they have done, they have chosen power over love, even unconsciously aligning themselves with the "will to power" as the meaning of life.

Jonah was angry enough to die over a plant that had sheltered him but then died.  Like modern cases of road rage, a seemingly trivial incident triggers anger from a deeper source.  Jonah was angry that God spared the Ninevites, as God's mercy did not accord with Jonah's interpretation of justice, and Jonah's desire to witness the punishment of the unrighteous.  In the modern world, our sense of justice allows little room for human suffering as a reality permitted by a merciful God.  We are slow to believe, and quick to judge -- to judge God Himself, and even to justify our rage against Him, though He is defenceless, hanging on that Cross.

With what infinite patience and tenderness does the Father of mercies respond to all our sin and ignorance, to our anger, pride and self-righteousness, our fascination with death, and all our suicidal tendencies.  Much as in the Gospels, Jesus on the Cross pleaded for pardon for his executioners "(Father, forgive them; they know not what they do"), God made excuses for the Ninevites, that they did not know their right hands from their left.

The conversion of the Ninevites was completely unforeseen and even irrational.  How did a simple proclamation of imminent destruction inspire the people to believe God, proclaim a fast, put on sackcloth, turn from their evil ways and cry out mightily to God?  It is a wonder of God's mercy, and the same miracle that is possible for our times: that we will turn back from the path of self-destruction, repent of our covenant with death, and choose life.  It is worth noting that God appears to be angry at Jonah's lack of mercy, a reminder that the Lover of humanity often expresses His righteous anger in defending the ignorant and the weak.

May all people of faith, in facing the challenge of our times, imitate God's example of balancing mercy and justice: to be merciful enough to forgive those promoting euthanasia, and angry enough to live, being determined to fight for the life and dignity of the most vulnerable members of our society.  Furthermore, if we trace the itinerary of Jonah, moving out of vindictive wrath into a revelation of divine compassion, and following the insistent teaching of Christ on forgiveness and mercy, we may also discover that the first life we save could be our own.

Father Tim McCauley is a priest at St. Patrick’s Basilica in Ottawa

Cardus Senior Researcher Peter Jon Mitchell reflects on modern western society's discomfort with death and grief and the role that memory, faith, and religious communities can serve in the experience of public mourning.

The New York Times and National Post recently discovered the "trend" of young women entering religious orders to become nuns. Marlena Loughheed didn't need to read the news. She listened to her heart, and shares with Convivium why she answered the call to consecrated life.