Building on research released last fall by Cardus Family on the importance of emotional relationships to physical well being, program director Andrea Mrozek sat down with Dr. Sue Johnson to learn about a cutting-edge approach at the Ottawa Heart Institute. Healing Hearts Together is based on data demonstrating that strong family life can play a vital part in helping cardiac patients regain their health. In this second of the interview’s two parts, they discuss the “science of attachment” that’s at the heart of the new program. Catch part 1 of the interview here.

Dr. John Bowlby is responsible for allowing us to think in terms of bonding and connection with others as important in our human development and thriving. Dr. Bowlby, a British psychiatrist, is the father of attachment theory and someone to whom Dr. Sue Johnson pays homage in both Hold Me Tight and Love Sense. And rightly so—his work revolutionized the way we care for children and has application to romantic relationships, too.

Attachment is a concept we may be more familiar with in discussions of mothers and children. We may also have a distorted view of attachment principles based on highly publicized media reports of mothers breastfeeding four-year-olds. The reality of the theory is much different. It involves the idea that human beings are social animals, who rely on others for more than just the necessities of life (food or shelter). Attachment refers to growing healthy emotional bonds with those we love and trust.

Unbelievably, in the 1950s and 60s in Britain and North America, if even a two-year-old had to go to hospital, parents were granted visitor status and limited to visits once a week. Dr. Bowlby made a movie in 1951 called A Two-Year-Old Goes to Hospital, which showed the child’s despair and anger at separation from her mother. This caused a great controversy and experts thought it was suspect—there had to be other reasons for child’s evident discomfort. Today, writes Dr. Johnson, “when I get to sleep beside my child’s bed as he recovers from an appendicitis operation, I thank John Bowlby.”

We’ve come a long way in understanding parent-child attachment, and in applying these measures to childrearing. Where we have room to grow is in applying attachment principles to romantic relationships. Here, it’s not so evident that we have a necessary bond of reliance, even dependence on the person we love. It may be considered something of a failure or fault to identify this is the case. If we fail to understand our attachment bond to our spouse, we can teach all the communication skills in the world and it won’t impact relationship satisfaction, because, says Dr. Johnson, “you can only use the skills when you have your emotional balance and you are not in complete disconnection.” She adds, “the whole relationship education business has been fraught with difficulty mostly because we have not understood relationships.” 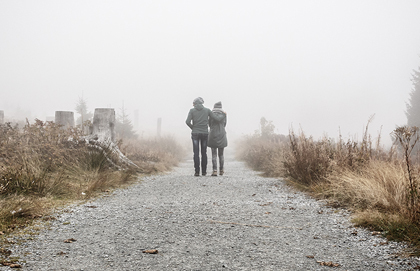 At The Heart of Health

Will holding the hand of a loved one calm the person receiving the shock down? And would it matter if that couple were married? Turns out it does.

Not surprisingly, the nature of the mother-child attachment bond can reflect how adults fare in relationship later in life. In one long term study cited in Love Sense the findings were: “The more securely attached to their mother the subjects were as children, the more secure were their attachments to others at later stages of development.”

To use language familiar to millennial university students, a marriage needs to be a “safe space” where it is understood that each partner can turn to the other as an emotional source of strength, not an adversary, or a competitor. This is what the science of attachment, or put differently, the science of love brings to relationships and what, in turn, Dr. Johnson has been able to use with great success in her trademark Hold Me Tight counselling. Hold Me Tight groups are offered across North America, with tremendous pickup, particularly in the United States.

Of course, not all patients going for couples counselling, cardiac or otherwise, are married. However, marriage is the ultimate signal of the commitment that undergirds attachment. “It appears,” says Dr. Johnson, “there is an emotional reality that has an impact on our bodies and the way we think and the way we see ourselves in marriage. It’s something about having a public commitment, whether you call it a wedding or whatever. Standing up in front of your tribe and basically claiming each other, which is how I see it, and making this commitment in front of other people that you are together with this person and that you will not abandon this person—you will stay with them and create a family with them—that has enormous individual and societal impact.”

In relationship research, just as with marriage and health research, studies bear this out, she adds. In one study, subjects undergo a brain scan while knowing they will receive an electric shock. The idea of the research is to see how the brain lights up for the individual alone, without any companionship, as contrasted with holding the hand of a stranger, and then holding the hand of a husband. Will holding the hand of a loved one calm the person receiving the shock down? And would it matter if that couple were married? Turns out it does. “The whole thing is predicated on the idea that the most basic thing in these bonded relationships is that I believe if I call to you and I’m in distress or vulnerable, you will respond. You will put me first. You will come. Because you care about my pain and my joy. That’s the essence of a human bond,” she says. She goes on: “And look how entwined that is with commitment. If I ask you will you come when I call and you say ‘maybe’—then I’m thinking what do you mean? Are there some times that you wouldn’t come?”

A crisis, like the stress of almost losing someone to a heart attack, can take negative patterns of behaviour and make them worse. Or it can unsettle a good relationship, as was the case for one wife writing in to a newspaper for advice recently: “I had a great marriage to my best friend, but four years ago he had a heart attack, which has changed his personality. He now gripes and blames me for anything that goes wrong in his day. He name-calls and criticizes constantly…. What can I do?”

For her situation, and others like it, the pioneering work of Dr. Sue Johnson in conjunction with the Ottawa Heart Institute can’t come at a better time. While Dr. Tulloch can’t share specific results from the pilot research, what she can say is that they are seeing improvements in patient health.

Dr. Johnson is going to continue putting couples counselling into place in as many venues as she can. There are Hold Me Tight groups springing up for other health conditions already. For example, there’s a group for people with Parkinson’s in Tennessee and a group in the Netherlands are using the program for people with diabetes. The basic premise of relationship help at a crucial moment for someone’s health could provide the assistance people need to turn not only health conditions, but relationships, around. In this autonomous (read lonely) age, where we no longer have the support of a village around us, our romantic relationships take on a greater significance. The idea of including our spouses in our treatment plans—not merely helping the patient alone but rather his or her primary community too—is so basic, it just might work.

At the Ottawa Heart Institute, it already does.

At The Heart of Health

Cardus Family's Andrea Mrozek sits down with Dr. Sue Johnson, creator of a highly effective strategy for relationship repair called Emotionally Focussed Couples Therapy and author of several books, among them Hold Me Tight (2008) and Love Sense (2013), to learn about a cutting-edge approach to emotional relationships and physical well being at the Ottawa Heart Institute.