Any Cardus supporters attending Hillary Clinton's speech to Canada's self-proclaimed leading progressive think tank might have simultaneously felt at sea and at home.

There was the former American first lady addressing an Ottawa luncheon crowd at the Canada 2020 event in the gushing tones of progressive politics: a glorious future awaits all who eagerly rush forward to embrace the times. 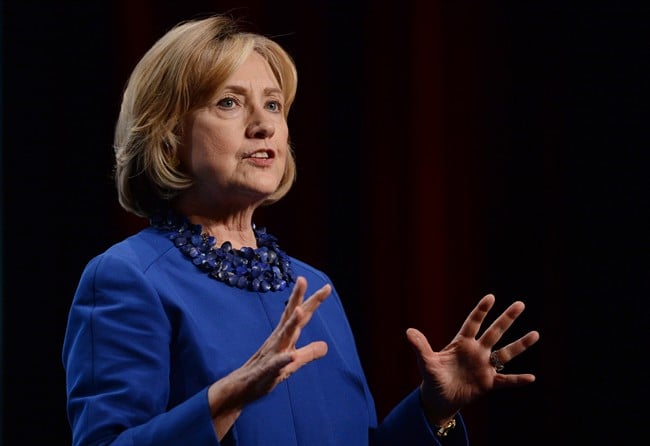 Yet very early in her 35-minute talk yesterday, the secretary of state, who logged more than a million miles visiting 112 countries in four years, began using Cardus language: the prudential need to renew underlying social architecture.

Listening to her, it was easy—albeit a little dizzying—to imagine that the woman who may well be president by 2016 had filched pages of her text from our own Ray Pennings or Michael Van Pelt. The primary difference was scale. Cardus, of course, focuses on North American social architecture. Clinton, being American, went global.

"The old architecture is buckling," she told the crowd on hand for a part-fundraiser, part-book-promotion stop at the Ottawa Convention Centre. "We need to construct a new architecture, a global architecture, and that requires a long-term commitment."

Candid Discussions Worth Having
A New Meaning for Cancel Culture
Belfast, Brexit and Boris Johnson

If the world seems to be falling apart a little faster every day, she said, it's because our global architecture—the "masterpieces" of institutional vision—that developed after the Second World War can no longer respond effectively to the incessant shifts inherent to the Internet age.

Post-1945, social and political lines of authority were as clear and straight as those of classical temple. In 2014, those lines overlap, conflict, and circle back to meet themselves going the other way.

"Today we have to build a new architecture that will owe more to Frank Gehry than to the Parthenon," she said.

She pointed, as an example, to the current U.S.-led coalition fighting the massed thugs and terrorists who've swept out of Syria under the banner of something called ISIL—the Islamic State in Syria and the Levant. In an earlier era—like, oh, say, 2003—Western powers would have shown up in force, pounded the miscreants into oblivion, dusted their hands, and gone home declaring the mission accomplished. The world, quite simply, is now much too intertwined for such a response, Clinton said.

Without the explicit inclusion of neighboring Arab countries as partners, and a long-term resolve to help build functional social architecture in Iraq, the debacle of the 2003 invasion would simply repeat itself. But that building project will have to overcome the complexities of supporting conventionally recognizable institutional structures while adapting them to the tectonics of social media and its myriad forms of always-on information flows.

The enduring ordering importance of the State cannot be forgotten. Nor should the potential mediating benefit of organized religion be minimized, she said, dismissing ISIL as merely a heavily armed acronym precisely because it fraudulently lays claim to those two characteristics.

"I refuse to call them the Islamic State because they are neither a State nor Islamic," she said.

Despite the dreadful aftereffects of neoconservative fever dreams about easily exporting Western democratic institutional habits to the region, we should not give up on the good we have to give. We just need to deliver it in a manner that matches the realities of the times.

No one should be so naïve as to believe that all good will come from Google. But Clinton pointed out that a fundamental difference between al-Qaeda and its successor ISIL is a mastery of social media to obtain its nefarious ends. The power that works for the ogres of the age has to be fully understood and mastered, as well, by those working to foster the true, the good, and the beautiful.

The key, Clinton stressed, is making it not merely an informational add-on, but intrinsic to the emerging social architecture. Learning how to do that is obviously a big part of the work in progress for the progressive and the prudential alike. It's a bit like being at sea and at home at the same time—or the heady trepidation of discovering that Cardus and Hillary Clinton are on the same page.

A New Meaning for Cancel Culture

COVID-19 has unleashed an epidemic of event cancellations, including the historic National Prayer Breakfast in Ottawa and a speech by Cardus’ own Milton Friesen. Peter Stockland finds good news behind the closed doors.

Think of it this way: for the last 30 years of the 20th century, citizens of Belfast, Derry, and other Northern Ireland cities, negotiated various aspects of their lives around police and military checkpoints, demands for ID cards, and flashlights shone in their eyes at night Why? Because beyond the...