Read the original interview to which Convivium readers are responding here.

I’m not ashamed to say that I kissed dating goodbye for a long time. As the homeschooled son of a missionary-turned-pastor, Joshua Harris’ approach fit right in with who I thought I was supposed to be. I’m sure it saved me heartache, pain, and risk. But as I rounded year three of Bible college, I couldn’t help but wonder if adopting someone else’s plan for my life had been more about fear than embrace. I was spared rejection, yes. But I also avoided the dignity of risk: opportunities to learn and grow and come to know myself better in relation to those around me. I’m now gratefully married with three beautiful children, but it didn’t happen the way I thought it should. I’m glad that Joshua Harris is revisiting the impact of his book. The point is not that God cannot work in the way Harris has described. It’s that God works in mysterious and redemptive ways. Our projections of how this is going to occur say more about us than they do about God. ~ Keith Dow

While reading Convivium’s recent article Revisiting ‘I Kissed Dating Goodbye’ I was surprised by my response. I was angry reading even the title I Kissed Dating Goodbye, I was angry at Joshua Harris, and the more I read of the article, the angrier I became (despite Harris’ willingness to reevaluate his own book).  When the book I Kissed Dating Goodbye was published it was widely read in my church, and strongly promoted at the youth group I attended. I was 14 at the time and had little dating experience. When I read the book I took to heart. It was persuasive and compelling, and came at the recommendation of someone I knew and trusted - my youth group leader. All of the guys I knew had also read the book, and when we wanted to date, we had no idea what to do. We were afraid of dating because of the pitfalls Harris lists in his book. Furthermore, to openly admit that we were dating became a taboo in the church. I Kissed Dating Goodbye served to cut us off from the only relationship ritual we knew how to perform, and left nothing substantive in its place. So I dated without calling it dating. And the result was a string of ill-defined relationships with no clear beginning, middle or end, that led to as much heartbreak as dating would have. ~ Jessica Walters

I read I Kissed Dating Goodbye and Boy Meets Girl twice – once at 15 and once again in my early twenties. The first time I read it I was, in many ways, a child, and I responded to it as a child. In a season of life where a relationship as a means of discerning marriage was still a long ways off, it acted as a strong model. I read it with very little discernment and took it to be Gospel truth, the only model of a Godly romantic relationship. In the midst of that, though, I Kissed Dating Goodbye continually pointed me towards Christ, and grew in me a desire to live every aspect of my life in a way that was pleasing to God.

I read I Kissed Dating Goodbye and Boy Meets Girl again in my early twenties, this time as I entered into an intentional dating relationship with the man who would become my husband. As an adult, I found it to be a helpful framework for what a Godly romantic relationship could look like. We started on a foundation of shared faith and calling, and we drew on many of the principles in sexual purity, intentionality in getting to know one another, and family involvement. Oh, and one other thing. We dated. Intentionally, and to the best of our ability, in a God-honouring way. 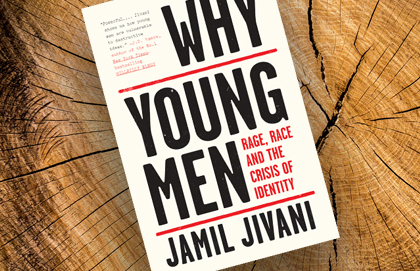 Me Against the World
COVID in a Lifeboat
Publisher's Letter

Once again, this time as an adult, it pointed me towards Christ, not just in my relationship, but in all aspects of my life. So my experience with reading I Kissed Dating Goodbye was overwhelmingly positive. Each time I read it, in various wildly different stages of life, I came away closer to Jesus than when I started. And were I to read it again now, three years into marriage, I'm sure I would agree with some things, disagree with others and once again be pointed towards the goodness of Christ. ~ Brittany Beacham

I read I Kissed Dating Goodbye, I believe, when I was 15 or 16. Since then, I have dated amazing Christian women, and have now been married over two years. I have had numerous conversations about Joshua Harris’ book, along with the flood of material that was written about it and in response to it in numerous places, including dorm rooms, at kitchen tables, and with people of all ages and from various denominations.

Being about 14 years removed from my reading of it, there are few specific details from the book that I can bring to mind. What I do remember. and what has shaped my dating life, engagement, and now marriage, is Joshua’s urgent request that his readers put Christ first in their relationships; that they put the needs of the other person ahead of their own desires no matter how passionately they feel; and that they bring intentionality and thoughtfulness into their romantic relationships. This includes seeking out and, (more difficult), heeding the advice of mentors.

I read with interest Hannah Marazzi’s interview with Joshua. My main takeaway is something that has given me a lot of peace: his thinking is still changing. Many have spoken out against the book, or against how some Christian leaders have used the book, or what they perceive the book to say (in some cases, without having read the entirety of it).

Joshua himself has spoken out in recent interviews about how his thinking has changed since the book came out. That was really cool to see. He isn’t afraid to re-think his own well-publicized and debated views. He is still learning about Jesus Christ, and how Christ wants us to live all aspects of our lives - as we all are. The interview reminded me that my own thinking will change and be stretched, and I shouldn’t be afraid of that. We are all very much in progress. ~ Paul Oleniuk

Me Against the World

Catastrophes such as the April 23 mass murder of 10 Toronto pedestrians deepens bafflement about those committing these heinous crimes. In Why Young Men: Rage, Race and the Crisis of Identity, Jamil Jivani draws on his own background of angry dislocation to explore the "whys" – and "why nots" – of male ultra-violence. Today, Convivium publishes this excerpt from Jivani’s compelling new book.

COVID in a Lifeboat

Chantal Huinink, Jasmine Duckworth, and Keith Dow consider the ethics of disability in a time of pandemic crisis.