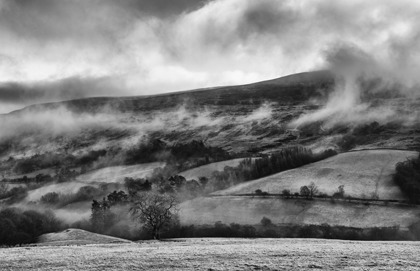 There appears to be an intriguing narrative gap in AMC’s brilliant zombie apocalyptic series The Walking Dead. No one, in any episode for the first three seasons at least, ever goes to Costco.

At first blush, it looks like a basic flaw in story coherence. Though set in the very near future, The Walking Dead’s inhabitants have entirely abandoned our current arguments over inequitable income distribution and our dogmatic debates over the sanctity or profanity of trickle down economics. There is, after all, precious little time for such palaver in a world where some mysterious affliction has left the living and the undead alike scratching and clawing at each other for mere sustenance.

A “walker“ biting the hand that feeds it. (Peter Stockland)

So, wouldn’t you think at least someone would swing by Costco to check whether the shelves still contain one final cello-wrapped package of 385 pork chops, an overlooked bag of 72 bundled bread loaves or that last, lonely, leftover 450-pound maple glazed ham? Certainly, it would seem natural that The Walking Dead’s zombies—the “walkers” or “biters” as they are alternatively called—should make an instinctive beeline for a Costco, if only to feel at home once more. If you need to ask why, you’ve never seen the show, never seen a zombie or never been in a Costco on a Saturday afternoon.

When I was dragged into the chow–down frenzy that is Christmas at Costco, I hid in terror behind an eight-tiered chocolate tortilla chip cake watching what seemed like hordes of “walker” shoppers shuffling toward me. Having spent a few days gorging on three entire seasons worth of Walking Dead DVDs, I knew the situation was plot-perfect for Sheriff Rick Grimes and his survivalist sidekick Daryl Dixon. Were the two of them ever pinned down by Costco “walkers”, they would make an immediate run for the store’s crossbow section to stock up on 100-packs of arrows—even if meant they risked an impulse buy of 24 bonus-blade machete kits and a dozen new hatchets they really didn’t need. In all the hours that I watched TWD, I never saw Rick or Daryl do so much as a drive-by of Costco, never mind try to wrestle one of the plus-sized Costco shopping carts out of those little corrals that dot the stores’ 50-acre parking lots.

It seems a curious omission given the way the TV series and the discount warehouse experience raise complementary questions. The surface plot of TWD revolves the question raised by the paradox of the title: If the dead walk, can they be considered truly dead? Similarly, entering the gates of Costco gives rise to the query: if shopping involves filling up a cart the size of a hot tub with more food than was eaten in several African countries last week, can it really be called shopping anymore? Taken together, the questions conflate as: what is the possible meaning of life when the purpose of life has become simply more?

The best answer—one that strongly suggests TWD’s Costco lacunae is entirely intentional—lies less in the plot, dialogue, and characterizations of the series and much more in its silent visuals. They are the element of the series that oblige us to consider the nature of life, even life beyond death, in the aftermath of a culture of supersaturated abundance.

The show’s Georgia landscape is ripe with rotting corpses and riven by blood-drenched conflicts between survivors and walkers. It is also so deep in the detritus of consumer capitalism that it often looks as if two squadrons of air-borne Walmarts have collided at 5,000 feet. This infinity of abandoned possessions continually remind us that we are in a world where consumption has become the single constant.

Walkers don’t just attack and eat. They incessantly bite every passing hand they find. The instant the mystery syndrome “turns” them from death to death-as-life, their existence becomes 24/7 ravening. They don’t ingest only to stay “alive.” They “live” exclusively to feed again. And as Sheriff Grimes learns from the last scientist left at Atlanta’s Centers for Disease Control, “we’re all infected.”

Even those who have survived are fated, once they shuffle off this mortal coil and leave behind the world of purchased things, to shuffle on in a literally mindless search for something else to consume. In the words of one character: “I know Jesus promised the resurrection of the dead but I didn’t think this was what He had in mind.”

The line is delivered, at a very dark and desperate moment, as comic relief, but it also puts in stark relief the spiritual quest at the heart of the series. It’s a quest that takes The Walking Dead beyond the conventions of post-apocalypse ethical quandaries. It leaves us asking: if eternity is purely a matter of the infinite more, is it an afterlife worth living?

Happily, the show’s highly intelligent creators resist the temptation to deliver a pre-cooked sermon that scolds all appetite. They seem to recognize that, in fact, Costco is not causality. Abundance, even when revealed in the cold light of calamity as ludicrous excess, is not inherently evil. What is deadly is “stuffing up the hole in your culture,” to again borrow the perfect words of Leonard Cohen, with stuff as a simulacrum for hope.

Hope is a highly suspect commodity during much of The Walking Dead. There is prolonged, sometimes violent, debate about whether it would make sense to allow it to survive, even if there were certainty it exists. By the end of the third season, however, a definitive “turn” is made. Death, as Sheriff Grimes was told, infects us all. Hope, however, remains steadfastly more powerfully infectious than the mystery that launched the apocalypse. And hope can’t be found on any of Costco’s super-abundant shelves. It’s no accident that the survivors in The Walking Dead elect to skip the trip.