Barbra Clayton is an Associate Professor of Religious Studies at Mount Allison University, a liberal arts institution located in the heart of maritime Canada. She is the author of Moral Theory in Śāntideva's Śikṣāsamuccaya, the article on Buddhist Ethics in the Oxford Handbook of World Philosophy, and several articles on Mahayana morality. Her recent work focuses on the ethics of environmentalism in the Shambhala Buddhist community, as well as on Buddhist monasticism at Gampo Abbey in Canada. She is the co-editor with Dan Cozort of the Journal of Buddhist Ethics, though is currently taking an extended sabbatical from this role in order to devote more time to her two small children, Emma and John. She lives with them, her husband Brian, and a cat named Shime, in Sackville, New Brunswick. She is a recent and zealous convert to organic gardening. 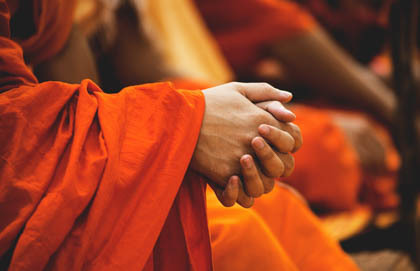