Since 1953, the 27th of Nisan on the Jewish calendar, which in 2016 falls today, has been marked as a day for observing with solemn ceremony the most terrible tragedy to befall our people.

However, with the exception of the recitation of the special Kaddish prayer in memory of the six million, these ceremonies have been primarily of a secular nature. As Rabbi Golinken, the President of the Schechter Institute notes, “historic events are remembered in Judaism only if it they are anchored in religious rituals. The kindling of six torches by survivors in the courtyard of Yad Vashem is a meaningful ritual, but will it last when there are no living survivors?” 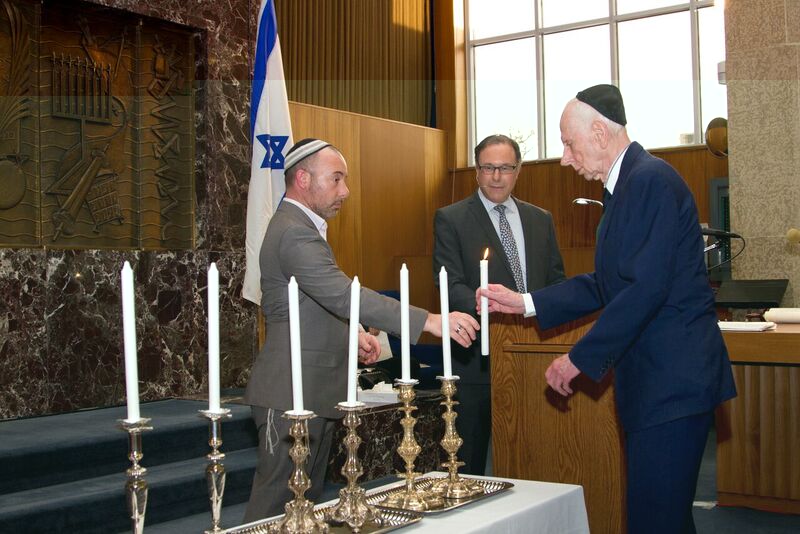 Well-known Canadian survivor and philanthropist, Alex Eisen, suggested and commissioned the idea of a short liturgical piece in six chapters that would outline the main experiences of the Holocaust: the background for the Holocaust in Europe; the ghetto; work camps; concentration camps and gas chambers; an elegy for the victims of the Holocaust; and the survivors and the establishment of the State of Israel. It was also important to deal with the theological tremendum of the Holocaust: to ask questions that are perhaps impossible to answer. The Schechter Institute in Israel, led by Professor Avigdor Shinan, took on the task of composing this beautiful piece of liturgy. With the writing and creation of a scroll and Tikkun – a copyist guide for scribes - of Megillat Hashoah (the Holocaust Scroll) the Conservative Movement of Judaism has allowed us to observe together through a meaningful, and unifying liturgical ritual. Those passages, which are read in Hebrew, are chanted according to the same trope as Eichah, the Book of Lamentations, which commemorates the destruction of the Temple and the ensuing exile. Unveiled in Israel that year, Megillat Hashoah was recited publicly for the first time in North America—at an April 29, 2003 Yom Hashoah ceremony at the Beth David B’nai Israel Beth Am Synagogue in Toronto. More than 1000 worshipers turned out for the event.

At the Shaarey Zedek Synagogue in Winnipeg, in partnership with the Freeman Family Foundation Holocaust Centre of the Jewish Heritage Centre of Western Canada, we have taken this liturgical observance of Yom Hashoah one step further: the Megillat Hashoah reading is an interfaith event. We invite readers from many different faiths to read the very moving English words from the scroll.

Our readers have been members of the clergy, politicians, the chief of police, educators, and others whom we feel have built bridges and are  therefore contributing in some way toward the goal of tikkun olam. As well, for eight years now, six candles have been lit by Shoah survivors and/or their families as part of the evening’s memorialization of the six million.

This year, I am proud that for the first time we lit a seventh candle in memory of the five million other victims of Nazi persecution. A representative of the Roma community, a gay member of the congregation, and the Chair of the Manitoba League of Persons with Disabilities, joined in lighting the candle. We symbolically formed a seven-branched menorah, a sign of continuity and recall that the biblical menorah is also symbolic of a bush burning in the flames, yet which remains unconsumed. We have a sacred duty to remember—to remember every victim. While the Shoah was certainly a Jewish tragedy, its implications are universal.

Belle Jarniewski is the incoming president of the Manitoba Multifaith Council, Chair of the Freeman Family Foundation Holocaust Education Centre, and author of the 2010 book Voices of Winnipeg Holocaust Survivors.

A Beautiful Blessing: My Brother

In her Golden Thread submission, Faith shares about the struggles she, her family, and her brother faced as he struggled with his health from birth. She writes, "Many people would see a child who experiences defects like Liam’s, as 'imperfect,' but they are truly missing out on a beautiful blessing."

Writing Faith Into The Public Square

Convivium contributor Karen Stiller finds inspiration in writers who have shown courage writing their faith into the public square, providing opportunities for writing about what is important to the faithful.

The Power of Humility