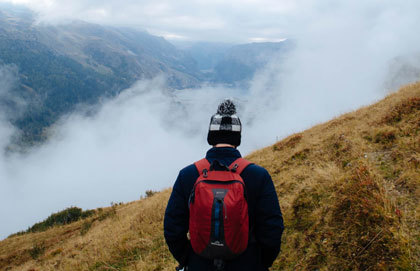 I have a strong fondness for hostels. While the notion of sharing a dorm room with a dozen strangers for a few nights does have limited appeal, it is the people who are staying in those bunks which form the foundation of the hostel experience. When you sit down and talk with your fellow backpackers in the shared living room or kitchen, you find that many offer a unique take on how to confront the frustration of our times. By becoming modern sojourners, they have adopted an approach towards life that is an enacted expression of a quite counter culture and offers a powerful example of what it means to be a contemporary pilgrim.

Compared to those who have spent months and years away from home, I am far from the most seasoned backpacker out there. Only staying for a few dozen nights in just a handful of cities. But in my limited time spent in hostels and living out of a pack, I have had the opportunity to get to know some of those people who have decided to pursue backpacking as a full-time lifestyle. In these chats with my fellow hostellers, I have been able to hear about their motivations for going abroad, as well as about their reasons for leaving everything at home behind and what they are hoping to find in doing so.

In my most recent stay at a hostel in Montreal, I was able to get to know some folks from across Europe and the Americas as we played a game of bingo in the kitchen after dinner. As the evening went on, the focus of our conversation turned away from the game and towards our experiences travelling and our lives back home.

One girl expressed how she often felt claustrophobic in her small home country of Belgium and that she hoped to find true wilderness in Canada. Another of the hostel volunteers told us how he had not been home to Italy for almost 10 years, instead, he has chosen to float around Brazil, Canada and the U.S. as a party organizer and semi-pro soccer player. And there was Oscar, who after graduating from university in Mexico City decided to join some friends as a migrant worker on construction sites in Pennsylvania. He mentioned how the bunk beds in the hostel felt like a luxury hotel after sleeping in a friend's dirty stairwell for weeks on end. No one at the table had any concrete plans for what would come next,aside from maybe a list of cities they hoped to visit. Despite having only a hazy vision of the future, it was evident they were looking for something, and that they thought travel might be the way to find it.

There is the unspoken assumption that being materially comfortable will lead to satisfaction, but as most middle and upper-class people come to understand, that is not usually the case. So, in reaction to this, many backpackers have chosen to trade in the material comforts of home for the ability to experience the world. This is often done in the hope that it may provide something that their existing financial and social prospects simply do not offer them. For some, this comes as a sort of coming of age ritual when they gain freedom from school and independence from family. Others look to it to help wrestle with the great questions of life regarding purpose, identity and love. This is often the result of a frustration with a culture that in their eyes has put too high a value on materialism and not invested enough in genuine human connection. Still others seek it as an answer to crisis. For example, is not uncommon to meet people in their forties and fifties who have picked up backpacking after a major separation or divorce. These are people often deeply dissatisfied with the status quo of their own lives, and desperate for some sort of change.

This change often throws aside a sense of normality for months or years at a time. There are no permanent homes or consistent incomes. Spaces shared with strangers become your own living room. Temporary work becomes a much-needed source of funds.

To travel like this not only limits your material resources, but also throws you into a social scarcity as well. You are left without the supports and systems which undergird your regular life, and which provide you with a semblance of home. The uncertainty of new spaces challenges you to confront the anxiety and fear of being without people who love and care about you. The fact that you are alone and isolated brings about an immense awareness of your own social uncertainty, forcing you to admit that you are a stranger, and are in need of a friend.

It is out of this vulnerability that hostels and backpacking communities become a place where a variety of characters can connect and swap stories with one another. It may be because many of these people will likely never see each other again, or that this way of travelling attracts a certain personality, but either way the hostel environment leads to people opening up with strangers in a strikingly personal way. It exemplifies that deep relationships don't necessarily need to be long drawn out affairs. Sometimes an immense amount of honesty can be revealed in a single conversation or a friendship which lasts for a weekend.

Some of the most the profound and honest conversations I have had about faith, religion and God have occurred with strangers outside hostel bars at 2 a.m. During these late-night chats, we chose to ignore our profound disagreements in order to listen and understand how each other believed the world to be.

Hostels are certainly not centres of Christian character or orthodoxy, with most folks in them plainly choosing to reject traditional religion in favor more unconventional approach to spirituality. But this does not mean that there is no common ground or Christian virtue to found amongst the backpacking community. In fact, far from it. For example, the virtues of hospitality, humility and gratitude appear to be naturally practiced within hostels, yet they often seem so lacking within our own Christian communities. I believe this has much to do with how living out of a pack forces you to be happy with the little that you have, not frustrated with all which you lack.

With so much of life being uncertain, the recognition of your own fragility breeds humility, and the simplicity of living leads to a gratitude for that which can be so easily taken for granted. As a result, those with little are often those most willing to give to another because they recognize the profound impact that such an action can have. It is not uncommon to find a backpacker with few supplies and a small budget sharing their own dinner or a chocolate bar with a stranger they met only moments before.

Paradoxically, this contentment is also connected to an equally important sense of dissatisfaction with life and the world around us. In the face of stagnation or decay at home, some have chosen to load a backpack with the necessities and head out into a foreign place. Sometimes this is to escape, but more often it is in search of something which they currently do not possess.

When observing the status of their relationships with work, family, consumerism, nature etc., they have judged these things to be lacking and in need of change. But unlike the traditional revolutionary, they don’t attempt to change the entire society around them. Instead, they look to change how they relate to it themselves. It is this radical dissatisfaction followed by radical action that I believe Christians and the Church could so richly benefit from.

The dissatisfaction is distinct from the type that leaves someone complaining and nothing more. Complaining is simple. From the whiny toddler to a to crotchety elder, it comes naturally to us all. But righteous dissatisfaction – conviction – is linked to righteous action. In order to find satisfaction holy in something, we need to recognize our dissatisfaction with something else unholy.

This is one of the many areas where the modern backpacking culture connects to ancient spiritual practice of pilgrimage. For pilgrims undertake their journies when they recognize that they are in need of healing and sanctification. Once this need is recognized they can then leave home in the belief that this need can be found. But if pilgrims do not perceive an ache or a yearning in the first place, they will never look outwards and begin their journey.

To be a pilgrim is the leaving of home behind with a desire and expectation for change. In this sense, backpackers are the modern secular pilgrims, carrying with themselves a yearning for more. While we may not all belong to religious traditions which practice pilgrimage or may not necessarily have the ability to pursue such an endeavour, we would be remiss if we did not at least practice the virtues and attitudes it fosters. Above this though, we need not forget to undertake the challenges and journeys which take us away from the mundane and towards that which is greater.