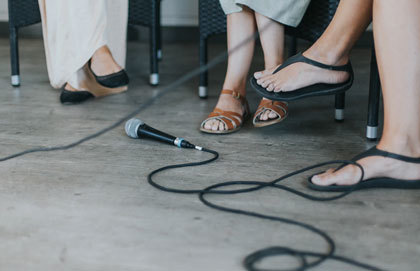 “The feminine is that which receives inspiration, grace, life, holds it within the body, and gives it existence. Woman is the receiver through whom God transmits the life-giving signal of His love into the world. The mediatrix. The medium in His will made manifest… She is child-bearer, certainly, but also the bearer of artistic works, political hopes, new ideas, healing knowledge, community histories, loves and remembrances treasured in the heart.”

From the beginning, the Word had me. Words had me. That Word was made flesh and dwelt amongst me and my loved ones, pouring Himself out through the hands of my mother and father, their daily acts of sacrifice, writing the first love story I learned.

It wasn’t long before I, too, wrote stories, took words and made them flesh, let them ring out in song, or have their being onstage, or messily wrestle with eternity on pages that ended up in the pockets of friends and family. Worlds born from the womb of my mind and heart-spun into others’ orbits, depositing seeds and debris, to my delight and dismay, respectively.

Without knowing it, I was imitating Mary’s life, the first word-bearer, the Woman whose “Yes” undid Eve’s “No.”

To say yes to the love story of God, to carry Him – and thus, others, as He is always in the least of these – is to open oneself to life abundant, replete with both joy and suffering. Maddeningly, the two are often intertwined. Your children will drive you insane, yet are the ones who make you laugh the most. The works you sweat over will twist your hands with arthritis, roughen your fingers, fatigue your muscles, wear your joints, and break your heart.

As both a subject and co-author in the love story of my life, I have noticed that there is really no getting away from such labour pains. I can prepare well, rest adequately, put a thousand plans of prevention in place, but there will always be interruptions, demands from others, my own character faults and the pesky fact that I am not God, and so I cannot see all I wish I could. The narrative I would love to run with is resisted by reality and of course, I then rail against the unfairness of it all. Yet, if I direct my work towards the good, true and beautiful, it becomes the means through which the Potter moulds me into a work of art.

At least, I hope so. This is the story I have learned to tell myself because my CV doesn’t tell the story I wished it did. When I was younger, I dreamt of Broadway, of being a working singer, of continuing to be a favourite amongst the powers that be. (It never occurred to me that some of those whom I hoped to please would not necessarily be like the teachers I had who had championed me, but more like the high school peers whose cliques were closed to those who failed popularity contests, based on ever-elusive criteria). I never cared much about riches so living simply was never a great shock or burden, but the one story that didn’t exist in my mind was one of my life ending up, well, average, or one where career success wasn’t primary.

Over time, I have adjusted. I quietly said goodbye to Broadway in my heart, to being any kind of name, and simply focused on artistic and personal integrity: that is a story I can always trust myself to tell, or, at least it is what I attempt to return to when lost. Every once in awhile, I’m permitted a glimpse of the fruit of those efforts, investments in things which seem to call to me. Those things never seem particularly business savvy or something destined to move me up any known ladder of success…but they always seem urgent and necessary.

Such a glimpse came several weeks ago – on Mother’s Day to be precise – at the year-end showcase for the inaugural Canadian Musical Theatre Writers’ Collective (CMTWC) Montreal Writers’ Workshop. A year and a half ago, I had approached Landon Braverman during the CMTWC Blame Canada Montreal concert, asking him how many people I would need to run the writers’ workshop in Montreal. He told me 12, so I set about hustling on Facebook groups and bothering any friends I knew who had ever written anything in the hopes that the class could go forward.

While there was initially a good deal of self-interest in my endeavour – I long had been looking for formal collaborations with composers and this seemed to be an ideal set up – I also had an inkling that there were writing voices in our unique province that were waiting to be heard.

Those voices came forward and formed a lovely class, masterfully mentored by Jonathan Monro, that met bi-weekly from October to April, collaborating on various song forms within the musical theatre genre, and culminating in the writing of a 10-minute musical in pairs. Sunday evening featured a selection from our work throughout the year, performed with aplomb by Michael Daniel Murphy, Justin Eddy, Katee Julien, Sara Wunsch, yours truly, and Marie-Pierre de Brienne.

The work was varied and interesting – we sang about umbrellas, demons, kittens, tea, avocados, just to name a few subjects – and the atmosphere in the room was attentive and joyous.

As creators, it was rewarding to see our work brought to life in front of an audience – an audience that filled the Arts Lounge at Montreal’s Segal Centre, I might add – and the audience seemed to respond to this newness.

As I watched and participated in the congratulatory buzz following the performance, I felt immense pride in my classmates’ talent and work. I had carried a dream to term, helped push it into the world, and now it was breathing on its own.

“…blessed is she who believed that there would be a fulfillment of what was spoken to her from the Lord.” And Mary said, “My soul magnifies the Lord, and my spirit rejoices in God my Savior, for he has regarded the low estate of his handmaiden.” Luke 1:45-48